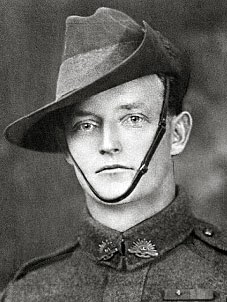 IT is 100 years since the action that earned a Victory Cross for New Norfolk-born Walter Brown.

“Wally” Brown was one of three Australian World War I Victoria Cross recipients to also see active service during the next great conflict, World War II.  He enlisted, understating his age by 15 years and saying he had no previous military experience.

He believed it was his duty to fight for his country and his family’s freedom.  The other two WWI Victoria Cross recipients who served overseas in WWII were Walter Peeler who understated his age by 14 years and Arthur Blackburn who was serving as a Lieutenant-Colonel with the 18th Light Horse (Machine Gun) Regiment when war was declared.

World War I
Walter Ernest Brown was born at New Norfolk on July 3, 1885, the son of timber miller Francis Sidney Brown and his wife Agnes Mary (nee Carney) who were living at 48 Bathurst St, Hobart, by the time Wally enlisted in the AIF on July 11, 1915.  Wally had attended school at New Norfolk before working in a grocery shop in Hobart. He had moved to Sydney in 1911 where he worked in a Petersham grocery store until he enlisted.

He was 30 years and one month of age when he was accepted into the Army on July 26, 1915. Five foot seven inches tall, weighing 10½ stone he had a fair complexion, fair hair and blue eyes.  His religious denomination was Church of England.

Following his three months initial training at Liverpool, NSW, Wally embarked from Sydney on the SS Hawkes Bay on October 23 with 49 members of the 11th Reinforcements for the 1st Light Horse Brigade. Disembarking in Egypt he entered the training camp at Tel-el-Kebir.  He was admitted to the 2nd Auxillary Hospital in Cairo on December 12 with a chronic infection of the middle ear in both ears. Discharged from Hospital on New Year’s Eve 1915, he was assigned to the 1st Light Horse Regiment, which was being re-formed and brought back to full strenghth after many of its members had served as infantrymen on Gallipoli.

After a further six months training with the 1st Light Horse Regiment, Wally became frustrated at being no nearer the fighting and devised a plan that he hoped would get him to France.  Reporting the loss of his false teeth, he requested leave to see a dentist in Cairo.  In Cairo, on August 21, he obtained a transfer to the 5th Training Battalion. Two months later he was assigned to the 55th Battalion at Estaples 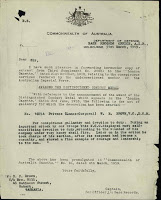 Transferred on November 15, 1916, to the 1st Australian Field Butchery, he was still with the 2nd AFB on July 22, 1917, when transferred to the 20th Battalion of the 5th Brigade and saw action at Menin Road on September 20, two years and two months after he had volunteered in Sydney. Wally was recommended for a Distinguished Conduct Medal for his actions during the Battle at Broodeseinde when, under heavy fire on the night of October 5/6, he had displayed courageous leadership, taking command of his section following the wounding of his sergeant. Wally had cared for the wounded members of his section while being sniped at by the enemy.

Three days later during the last terrible phase of the fighting at Passchendaele, the 2nd Division was again in the thick of it when a close friend of Wally, #9712A Private Claude Clark Hughes, a butcher from Whittlesea, Victoria, was posted as missing. Wally was offered leave in England but chose to stay and scour the battlefield searching for his mate’s body. Told where Claude had been hastily buried in a shallow grave, Wally and some of his comrades erected a large and elaborate headstone bearing the following inscription; “This Cross was erected in loving memory of Pte C. C. Hughes of the 20th Btn, and to the memory of others of the above Btn, who lie in this neighbourhood”.  Wally photographed the grave and sent a copy to Claude’s parents. After the war the War Graves Commision failed to locate the grave and placed Claude’s name on the Addenda Panel, No 59 at the Ypres (Menin Gate) Memorial).

Returning to duty 10 days later, Wally was made a Lance Corporal. He was wounded for the first time on November 3 and spent five days in hospital before returning to his unit. Wally was made Corporal on April 7, 1918.  He was with the 20th at Hangard Wood when their commander, Brigadier-General Robert Smith, led the 5th brigade as they forced the enemy to retreat. The Awarding of his Distinguished Conduct Medal appeared in the London Gazette June 3, 1918.

On July 6 as the 20th Battalion relieved the 21st in the front line, they were harassed by enemy snipers and machine gunners. Wally spotted the offending enemy post 65 metres from his position.  He picked up two Mills bombs and ran through the heavy rifle and machine gun fire across open ground towards the enemy. Although his first bomb fell short, the enemy withdrew from their post to a nearby dugout. Wally reached the dugout and called upon them to surrender. The first man to emerge attempted to disarm Wally who, holding his remaining Mills bomb aloft, managed to knock the German out with his free hand. An officer of the 137th German Infantry Regiment then led 12 men out of the dugout to surrender to Wally. Wally guided his prisoners back across the open ground to his mates, ignoring the furious enemy fire that was raining down on them.  When his sergeant was wounded again Wally stepped up to take charge of the party. The machine gun Wally captured is at the Australian War Memorial in Canberra.

The London Gazette of August 7, 1918, published the awarding of a Victoria Cross to Corporal Walter Ernest Brown and the next day Wally was wounded in the knee at Amiens. Rejoining his unit from hospital on August 25 he was wounded again six days later at Mont St Quentin. Promoted to Sergeant on September 13, Wally was attached to the AIF Administration Headquarters in London a week later. Wally Brown was invested with his Victoria Cross by King George V at a ceremony at Sandringham on October 7 and was granted one week’s leave.

Two weeks after returning to the Administration Headquarters, Wally and other Australian VC recipients were offered leave to return to Australia at their own expense.  Common sence prevailed when the transport section of the army was instructed to arrange free transport to Australia for these men. Wally declined the trip home and requested he be returned to the 20th Battalion.  He rejoined them on November 18, a week after the Armistice. The 20th was disbanded on April 20, 1919, and Wally remained in London on the army payroll while he successfully completed a course in cinema projection.  On November 4 he embarked on the HT Nestor for the voyage to Sydney. Upon disembarking on December 15, doctors found the ear infection that had plagued him for over four years had destroyed his hearing. Corporal Walter Brown VC DCM was discharged on February 15, 1920, and granted a War Pension.

His service medals were the 1914/15 Star #68872, British War Medal #20570 and Victory Medal #20351. Major General Sir Charles Rosenthal, who had as Commander of the 2nd Division recommended Wally Brown be awarded a Victoria Cross on July 10, 1918, was watched by 700 spectators as he unveiled the Victoria Park War Memorial at St Mary’s on November 18, 1922.  Rosenthal also unveiled the tablets on the three sides of the Memorial.  A 75mm Trench Mortar captured by the 20th Battalion on the night before Mont St Quentin fell was unveiled to the west of the Memorial by Mr R. B. Walker, MLA.

Wally worked in Sydney for 10 years as a brass-finisher, then moved to Leeton working as a water bailiff for the NSW Water Conservation and Irrigation Commission.  On June 4, 1932, Wally and his Irish-born bride, Maude Dillon of Cootamundra, were married at Christ Church, Bexley, by the Reverend Robert Lyle Houston. An Anglican Church, Christ Church is situated on the corner of Dunmore St and Forest Rd, Bexley, a southern Sydney suburb.  A surprise awaited the newlyweds as they left the church. Unbeknown to them, eight Victoria Cross recipients had had gathered to form a guard of honour outside the church. The guard was formed by Major Blair Anderson Wark VC, Lieutenant John Hamilton VC, Lieutenant George Cartwright VC, Sergeant George Julian Howell VC, W/O William Matthew Curry VC, Sergeant Arthur Evans VC, Corporal Thomas James Bede Kenny VC and Corporal Arthur Percy Sullivan VC.

Aged 54, Wally was still living in Leeton when he enlisted for World War II on June 1, 1940.  He understated his age by 15 years, claiming his date of birth was July 3, 1900.  Despite his age and lack of hearing, he passed his medical “Class 1 fit for overseas service” and entered the 8th Battalion on June 21 as temporary Corporal W.E. Brown # NX 35492.

Promoted to the rank of sergeant on July 1, he was transferred to 2/15th Field Regiment on September 2. Two months later he was assigned to a Signal Training Depot. Once again not happy with his chances of taking part in the fighting, he successfully applied to return to the rank of gunner and embarked for overseas on July 29, 1941. The 2/15th as part of the Eighth Division of the AIF, arrived in Malaya in August 1941.

When told of the impeding surrender of the allied force in Singapore on February 15, 1942, Wally picked up a quantity of grenades and walked in the direction of the enemy lines telling his mates: “There will be no surrender from me.” Some 130,000 allied servicemen were taken prisoner by the Japanese that day.

Sergeant Wally Brown was never seen again and was officially presumed missing February 28, 1942. With no known grave, Sergeant Walter Ernest Brown’s name appears on the Singapore Memorial in the Kranji Cemetery, 22km north of Singapore.  On July 19, 1945, a man claiming to be Walter Ernest Brown VC DCM applied for membership of the Mayfield-Waratah sub-branch of the RSL. When the sub-branch contacted the Army Records Department and confirmed Brown’s status as “Missing believed killed,” the impostor disappeared.

Walter Brown was survived by his wife and a daughter.  His son Walter Ernest Brown died of meningitis in June 1943. His widow Maud died 1963. The medals of Walter Brown VC DCM are on display in the Hall of Valour at the Australian War Memorial in Canberra. The Memorial also houses his portrait painted by Sir John Longstaff. 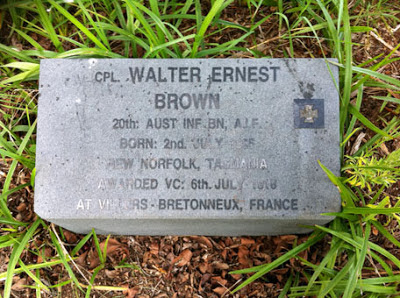