THE Tasmania Fire Service has declared a Total Fire Ban for the 24 hours from 2am Tuesday, October 29, until 2am Wednesday, October 30, for all municipalities in the state’s south. The declaration of a Total Fire Ban means that no fires can be lit in the open air, including incinerators, burn offs, campfires, fire pots and wood-fuelled barbecues. 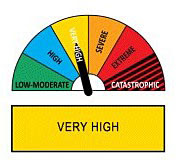 “Landowners with fires already burning or fires they have recently had on their property must ensure they are properly extinguished today. A number of bushfires TFS crews have responded to in the last week were started by out of control hazard reduction burns, so it is vital that landowners are vigilant ahead of the total fire ban,” he said.

Immediately reporting fires increases the likelihood that fires can be contained quickly. More information on Total Fire Bans and incidents can be found at www.fire.tas.gov.au or by listening to ABC Radio.

A warm, dry northwesterly airstream develops across Tasmania during the morning, bringing temperatures into the mid-20’s, RH around 20% and northwesterly winds of 35 to 45 km/h to parts of the east, south and inland Tasmania.

Very High Fire Danger is forecast for the following forecast districts:
East Coast, Midlands, Upper Derwent Valley and South East
The Tasmania Fire Service advises you to:
For information on preparing for bushfires go to www.fire.tas.gov.au.
The next warning will be issued by 5am Tuesday.