FIRE danger ratings in parts of the Derwent Valley and east of Hobart are expected to reach “Severe” today, the Tasmania Fire Service said last night.

The fire at Glenfern Rd outside New Norfolk remains uncontrolled and uncontained in inaccessible terrain but did not pose a threat to communities yesterday. Another fire is burning at Bluff Rd, Elderslie, and an uncontrolled bushfire at Dennistoun Rd, Bothwell, was at emergency warning level for several hours yesterday. Anyone still in the area between Black Snake Creek and Soldiers Creek is encouraged to leave if safe to do so.

“We advise communities in fire-affected areas to ensure they have a bushfire survival plan in place, and to check on those around them,” Mr Batt said. “The total fire ban remains in place for the southern region, and we again urge people to adhere to that ban and not light or cause any fires to be lit in the open.

“The community has listened to our warnings, and with their help we have not had many new fires start, and other fires have been reported to Triple Zero promptly,” he said. With the forecast very high fire danger predicted to reach the severe rating today, fire agencies have positioned strike teams and aircraft in place to ensure any fires that do start can be responded to quickly.

Advice given to Wednesday night’s meeting of Genfern and Lachlan residents remains current. “Our advice to over 100 residents who attended was that if they are not prepared to actively defend their properties, they should leave early. Leaving when fire conditions worsen will be too late,” Mr Batt said.

In the southern region there is a total fire ban in place until 2am Saturday, which means it is illegal to light any fire in the open. “People should also consider their need to use equipment such as lawnmowers, slashers and anything that may cause a spark because anyone who does start a fire, no matter if it was accidental or deliberate, will be held responsible for that fire,” Mr Batt said.

“Any fires should be reported immediately to Triple Zero to allow fire crews to respond and get on top of any new fires quickly. We urge people in areas already affected by fire to keep up to date with the latest information by listening to ABC Local Radio and monitoring the Tasmania Fire Service
website for updates.” 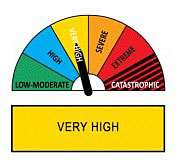 Weather Situation
A warm, dry northwesterly airstream will develop across Tasmania on Thursday and Friday, bringing temperatures into the low-30s, relative humidity of around 20% and northwesterly winds of 35 to 45 km/h to parts of the east, south and inland Tasmania.

The Tasmania Fire Service advises you to:

The next warning will be issued by 5am Friday.