DUE to elevated fire danger, the Tasmania Fire Service has declared a day of Total Fire Ban in the state’s north and south from 2am Thursday until 2am Friday, including the Derwent Valley where the fire danger rating will be severe.

The declaration of a Total Fire Ban means that no fires can be lit in the open air, including incinerators, burn offs, campfires, fire pots and wood-fuelled barbecues.

“Current weather predictions provided by the Bureau of Meteorology indicate Severe fire danger ratings for the south and southeast, and Very High in other districts in the north and south, with strong winds, low humidity and high temperatures forecast,” deputy chief officer Bruce Byatt said.

“These are the most dangerous fire weather conditions forecast so far this bushfire season and any fires that start will be difficult to control. The bushfire situation interstate, particularly in New South Wales, has demonstrated the impact bushfires can have on communities and is a stark reminder about the dangers of fire and the importance of being prepared, and having a plan,” he said.

“Have a discussion with your family about what you will do if a bushfire threatens your home, and get to know the bushfire alert levels so you understand the warnings the fire service provides during an incident. Waiting for a bushfire to start in your area is too late to make a plan.

“Landowners with fires already burning or fires they have recently had on their property must ensure they are properly extinguished today.”

“Immediately reporting fires increases the likelihood that fires can be contained quickly. For information on total fire bans and how to make a bushfire survival plan visit www.fire.tas.gov.au.“ 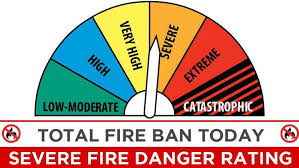 Weather Situation: A hot, dry, and very windy northwesterly airstream during Thursday will bring temperatures into the low-30s, relative humidity of around 15% and northwesterly winds of 40 to 60 km/h with gusty conditions to the eastern half of Tasmania.

The Tasmania Fire Service advises you to:

The next warning will be issued by 5am Thursday.