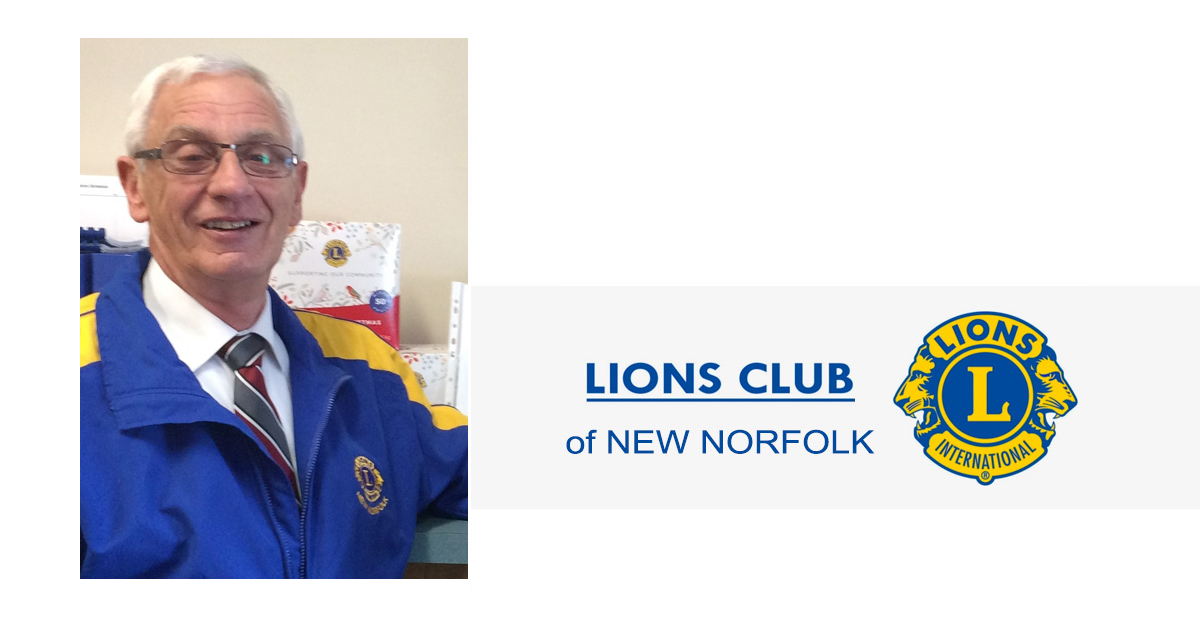 Greg Hudson is a well-known and popular Lions Club member having lived and worked in New Norfolk all of his life. “I’ve been a member of the New Norfolk Lions Club for over 40 years,” Greg said when being profiled for this column.

“Bob Sproule invited me to join and I haven’t regretted a day of it. During that time, I have held nearly all club positions,” he said. Greg has been an energetic and hardworking Lion and has helped on countless working bees and fundraisers and attended many state and district Lions conferences.

He is well known in New Norfolk as a man of integrity and compassion who has, for decades, supported community members when it is most needed. He is a former councillor, football club president and member of many committees and boards, past and present.

When Greg left school, he completed an apprenticeship and worked as a men’s hairdresser for seven years before having a career change. For the next 43 years, he worked in the local clothing store that began as Ron Williams Wenswear and later became Les Lees and finally Glasser and Parker.

While working in the clothing store, Greg became the New Norfolk representative for Graham Family Funerals, a role which has has now fulfilled for 31 years. “I’ll continue to do this while I have good health,” he said. “I enjoy helping families and being there for them in times of need and stress. Sometimes it’s difficult but always very rewarding.”

Greg enjoys being a Lion because members can help different people in the community through the club’s activities, as all funds go back into the community, such as helping needy families. “The camaraderie is also important to me,” he said. “We can raise funds individually but sharing it with others makes it enjoyable.”

Greg’s proudest moment as a Lion was when the local club hosted the District Convention in 1988. “It was one of our greatest achievements,” he said. “The feedback indicated that it was the best organised convention that people had attended. It was a great credit to our club and the community.”

“Like all organisations, it’s getting difficult to attract members because of work, family commitments and finances. For Lions, work and family come first and then members support activities and events in any way that works for them. We are always willing to sit down and talk to people who are interested in finding out more. So, if you have questions please get in touch by phoning me on 0418 127 439,” Greg said.