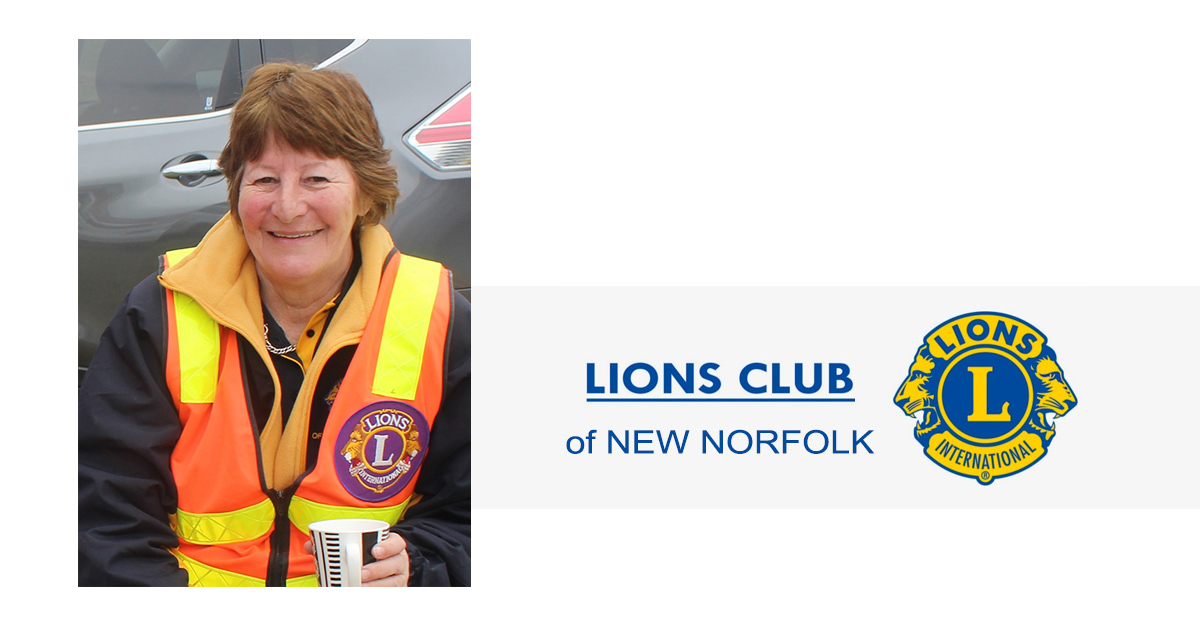 DENISE Smith has been a member of the New Norfolk Lions Club for almost three years. She has a “can do” approach to life and likes to keep busy.

As well as being part of Lions activities such as the Chocolate Wheel, Carols in the Park and operating the entry gates at Baskerville, Denise is a board member and the current club treasurer, roles that she will continue next year.

Born and raised at Waitara in the Taranaki region of New Zealand, Denise learned about hard work on the family dairy farm where she and her four sisters and two brothers milked cows for their allowance before and after school each day.

“It was a hard life but looking back it was great. Mum and Dad had an open house so our friends were always welcome,” she said. After finishing school, Denise trained to be a nurse at New Plymouth. “I specialised in children’s medical nursing. It was the most heart-breaking yet rewarding job that I have ever done.”

In 1975, Denise married Steve, whom she met in Year 8 at high school. They had two children, Toni and Garry, who spent their early years in New Zealand. Denise and Steve spent 12 months in Townville in 1988 and moved back to New Zealand in 1989 for two years before making the move to Australia permanent in 1991.

Their adventures in tropical Queensland in the next 26 years included managing motels and holiday units in Townsville, Innisfail and Mission Beach. At the end of January 2011, when Cyclone Yasi struck, Denise and Steve were operating a fishing and tackle business in Cardwell, between Cairns and Townsville.

Their stock survived the storm but they lost their boat, along with many others in the community. Sales plummeted and the business closed. Yasi is one of the most powerful cyclones to have affected Queensland since records began.

It was in Cardwell that Denise first joined Lions. “The Lions Club rooms were huge and were located next to the sports ground,” she said. “We raised funds by having barbecues, a weekly market and operating a bar during sporting events.

“After Yasi, our club rooms became the headquarters for donations from all over Australia. We spent months sorting through and distributing mountains of donations. In March that year, Prince William, who was in Australia, visited Cardwell, his helicopter landing on the oval, for a barbecue with the whole community. It was awesome.”

Denise and Steve were living back in Townsville when their children moved to Tasmania. Three years ago, this intrepid couple were drawn to our island state by the arrival of grandchildren. When they settled in New Norfolk, Denise met Troy and Margaret Bester and was introduced to our Lions Club.

“I always wanted to joins Lions again. I love mixing with people and I love that we help people, we make a contribution to the community,” she said.

If you would like to know more about the Lions Club of New Norfolk contact membership officers Greg Hudson on 6261 1329 or Troy Bester on 0401 064 172.
Lions Australia. We serve (more than sausages).