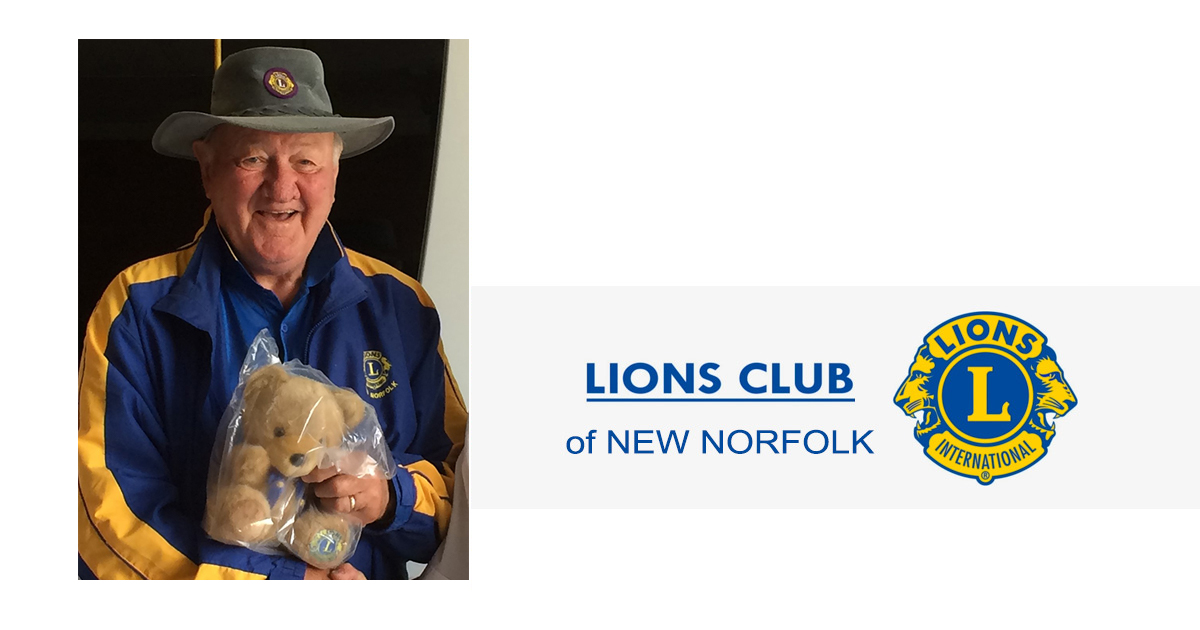 DICK ANDREW has been a resident of the Derwent valley and an energetic member of the New Norfolk Lions Club for more than five years. “Heather, my wife, and I moved from Maleny, Queensland, to Molesworth where we purchased a property with our number two son,” Dick said.

Heather and Dick joined the Lions Club and since that time Dick has taken responsibility for our postage stamp program, our eye glasses recycling, and our teddy bear program.

“I find it quite rewarding. The money we raise from selling the stamps provides funds for kids with disabilities,” Dick said. “The refurbished eye glasses go to people in need in developing countries. The teddy bears comfort local kids when they need it most.”

Richard Andrew grew up in Bristol, England, and was raised during World War II. When neighbouring houses on either side of his family home were destroyed in air raids, he was evacuated to the more rural area known as the Cotswolds. At 18, he joined the Royal Navy to train as a pilot. “I went to work for the Queen because she had more planes than anyone else,” he jokes.

“Later, I was offered a two-year exchange in Australia. In 1957, I arrived in Nowra on a Friday and was standing on my hotel room balcony when I heard a voice say, ‘You old Pommie bastard, what are you doing here?’ It was some of my Aussie mates, soldiers I’d met in Britain when we played rugby. We had a beer and I ended up in Sydney for the weekend. Only the driver forgot to collect me for the journey back to Nowra, so I was a day late reporting for duty.”

That two-year posting changed Richard’s life forever. “During that exchange, I worked on HMAS Melbourne and became Dick. I introduced myself as Richard and Aussies would say ‘G’day Dick’ and I would correct them and they would take no notice. This happened thousands of times so I just gave in and became Dick.”

It was also a time when Dick discovered much about Australia and witnessed the building of the Snowy Mountains Hydro-Electric Scheme. “I thought, ‘what a bloody amazing country this is!’”

Returning to England after the exchange, Dick worked again for the Royal Navy. He married Heather and they had three children. But navy travel soon took a toll. “My kids didn’t know me so I resigned. We moved to Sydney and I got a job with Qantas where I was a pilot for 27 years. My favourite run was Sydney-Singapore-London.

“When Qantas introduced early retirement, I got a job with Singapore Airlines so Heather and I moved to Singapore. I retired five years later and we returned to Australia. I never thought of my job as work, I got to do what I loved and it was fun! It’s been a good move to Australia. I know where I would rather live.”

The highlight of Dick’s local Lions Club work is when he learns about the journeys of the teddy bears the club provides to the emergency services. “Recently Bryce, a local ambo, delivered a baby in his ambulance and sent the new mum and bub into the hospital with a Lions Teddy Bear. I love hearing those stories.”

If you would like to know more about the Lions Club of New Norfolk contact membership officers Greg Hudson on 6261 1329 or Troy Bester on 0401 064 172. Lions Australia. We serve (more than sausages).