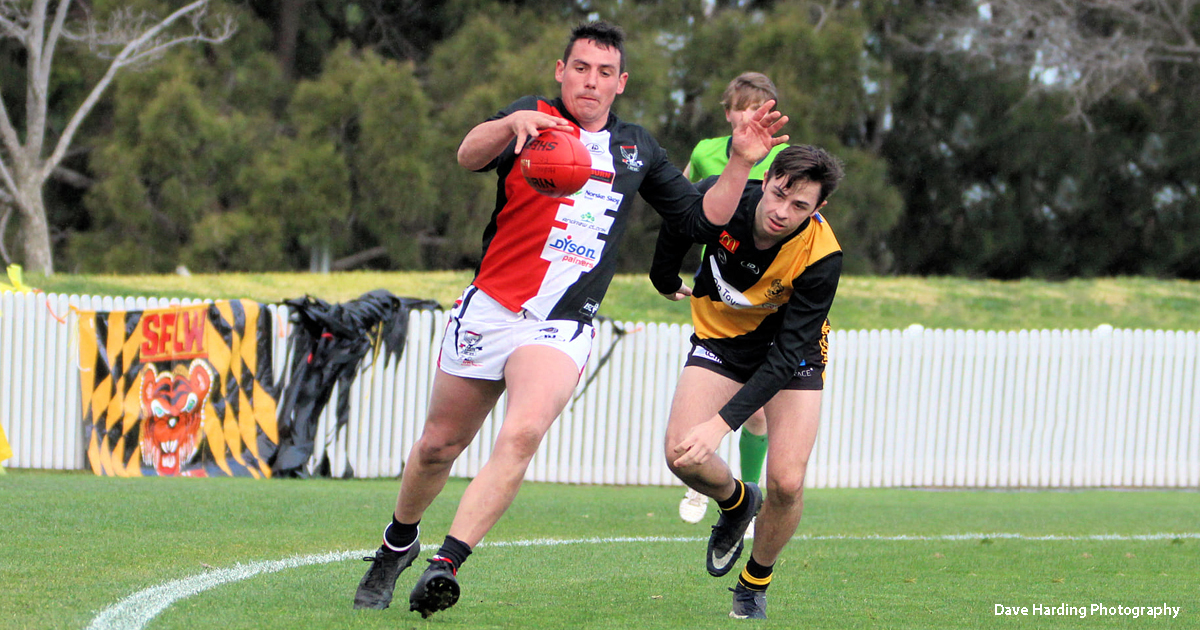 Eagles flying high at top of the ladder

NEW NORFOLK’S senior football team remains on top of the SFL ladder after a hard-fought win over the Hobart Tigers at the TCA Ground on Saturday, running out winners by 18 points. The Eagles had the edge over the Tigers for most of the afternoon, but the home side kept in touch throughout the game and trailed by only three points at three-quarter time.

The opening quarter was an even affair with the Tigers kicking the opening goal in the first two minutes of the game but the Eagles answered with Rohan Heron hooking a kick around his body which bounced in the goal square and playing coach Josh Clifford kicked in mid-air for a great opportunistic goal. The Eagles moved into attack from the centre bounce as young gun Jye Bearman passed to Cody Morgan who in turn found big forward Marcus Parker for the visitors’ second major.

Tiger onballers Lachlan Plummer and Luke Adams were busy around the ground along with Gerard Lynd while Eagle prime movers were Cody Morgan, Tyron Rainbird and Benny Lovell who continues his great form in the ruck. Big Eagle James Shearing was also having an impact with a number of clearances across halfback.

New Norfolk benefited from two 50-metre penalties which took young Cody Morgan from the Eagles’ backline to the true centre-half-forward position 40m out from goal as he slotted through the Eagles’ second major. Marcus Parker followed with another goal as he wrapped up his Hobart opponent for a holding-the-ball decision close to goal as the Eagles took a 13 point lead into the quarter-time break, 3.4 (22) points to 1.3 (9).

Coach Clifford had to reshuffle his backline at the start of the second term due to James Shearing leaving the ground with an ankle injury. The Eagles slammed on two quick goals through Rainbird and Parker to extend the lead to 25 points early in the quarter. Dangerous forward and playing coach Alex Gilmour kicked a much needed goal for the Tigers but the experienced Bryan Chaplin kicked two goals in two minutes for the Eagles, one from a great snap from the forward pocket and another from a great pass from captain Jacob Wigg.

The Eagles were on a roll, but cagey forward Alex Gilmour booted his second to keep the Tigers within striking distance with the half-time score reading New Norfolk 6.5 (41) to Hobart 3.7 (25). The third term belonged to the Tigers as they worked their way right back into the game as they started to win the ball out of the middle and were also running in numbers from their half-back line which created more forward entries for the home side as coach Gilmour booted three goals for the term to see the Tigers trail by just three points at three-quarter time with the Eagles 9.9 (63) to the Tigers 8.12 (60).

The Tigers had their tails up and took the lead early in the final quarter as Brad Joseph kicked his second goal as the game reached another level of intensity as players from both sides were going in hard to gain the advantage. But full credit to the Eagles as they met every challenge the Tigers threw at them.

Captain Jacob Wigg lifted his team with a great goal from 40m. Tyron Rainbird was great all day in the aerial duels as he marked across half back and speared a pass to Jamie Sokolski who kicked a great running goal from 40m out, followed by a great set shot from Nathan Eiszele 50m out on a 45 degree angle as he steered the footy straight through the middle. The Eagles kept attacking as Ben Lovell won the tap from a boundary throw-in that landed straight in the lap of Tyson Eiszele who snapped a great goal and the Eagles were home.

Young eagle half back Cody Morgan put in a great four quarter performance along with the Eagles’ experienced players who led the way in the final term as Wigg, Clifford, Lovell, Heron and Chaplin lifted the Eagles to an 18 point win over a dangerous Tigers outfit. The Eagles are at home this Saturday against third-placed Cygnet in what should be a cracker of a game with big power forwards at either end of the Boyer Oval in Eagle spearhead Marcus Parker and Port’s big key forward Josh Fox… don’t miss it.

WOMEN’S REPORT: Not received this week.

COLTS REPORT: The Colts had a bye.