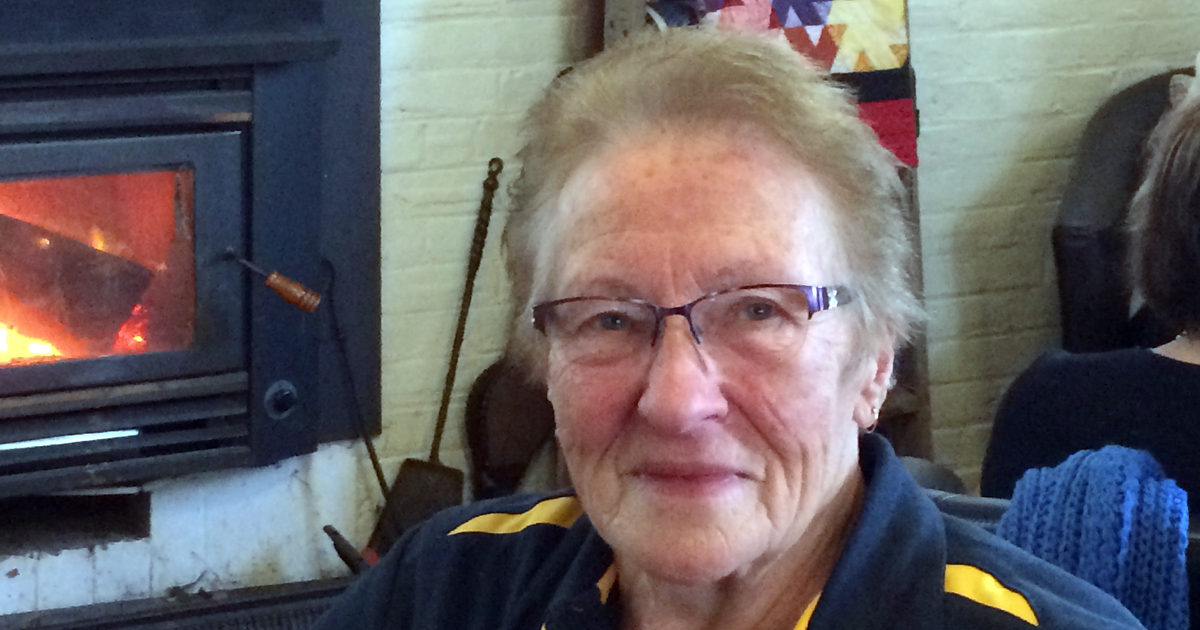 Fiona also has special projects to keep her busy. Through her friendship with key people in the Hobart Sporting Car Club, Fiona organises the Lions Club’s work at the Baskerville Raceway entry gates. She also helps to promote World Sight Day by distributing information for parents and teachers and magnifying bookmarks for children to the New Norfolk Library and local schools from Westerway to Molesworth.

Growing up on a dairy farm at Mitta Mitta in northeast Victoria created wonderful memories for Fiona. “I had two brothers and we had lots of fun and did all sorts of crazy things,” she said. “I had my own horse, ‘Gypsy’, and I loved her. A girlfriend and I used to help take her family’s cattle up to the high country. It was freedom. I learned to drive in our hay paddock using the hay bales as obstacles.”

Fiona attended local primary schools but this was interrupted by Perthes disease, a rare childhood condition that affects the hip. She was in traction for 18 months between the ages of seven and nine, and had to learn to walk again. She wore callipers on her legs when she returned to school.

A boarding school in Wangaratta provided Fiona’s secondary schooling and increased her fondness for her Mitta Mitta roots. “I remember longing to get home to the farm, my family and ‘Gypsy’ for the holidays,” she said. “It was always hard to return for the next school term.”

On leaving school, Fiona was called to nursing. She trained and worked at the Albury Base Hospital, St Andrews Hospital in East Melbourne, and Cooma Hospital in New South Wales. Married at the age of 20, Fiona soon began raising her family of three children: Clare, Bruce and Mathew. During this time, she worked in private nursing homes on night shifts.

Fiona and her husband divorced after 24 years together. In the three years that followed, Fiona worked in sales and promotional work with Myer, Coles and Vic Bacon. It was during this time that she was contacted by her very first boyfriend, Viv Cardwell. They rekindled their relationship and married in 1987.

While Viv worked in his public service job, Fiona worked in a milk bar/mixed business that they purchased in the Greensborough/Diamond Creek area of northeast Melbourne. A few years later, Fiona and Viv saw an advertisement for Hawthorn Lodge at Bushy Park. Accompanied by a friend, Fiona took a one-day trip from Melbourne and decided on the spot that this was a new adventure.

So Fiona and Viv moved to our beautiful valley in 1994. Fiona’s mother also came to live with them for the last six years of her life. Before long Fiona and Viv also purchased the shop at Gretna and for about five years
ran both businesses until they retired in 2013.

Fiona joined the Lions Club of New Norfolk in 2006, encouraged and sponsored by local travel agent Richard Parker. She immediately became involved with club activities and served as its president in 2017/18. The club offered camaraderie and opportunities to meet people in addition to supporting the community.

Fiona is proud of the work that she put into achieving the new entry into the club from Humphrey St and has high hopes for the club rooms. “They are a great resource for the community and I hope that they will be utilised more by the community groups,” she said.

Despite multiple hip replacements, Fiona is an energetic contributor to the community. As well as volunteering for Lions Club activities, she also serves on the Derwent Valley Online Access Centre Committee, the New Norfolk Swimming Pool Committee and the Bushy Park Market and Community Hall Committee.