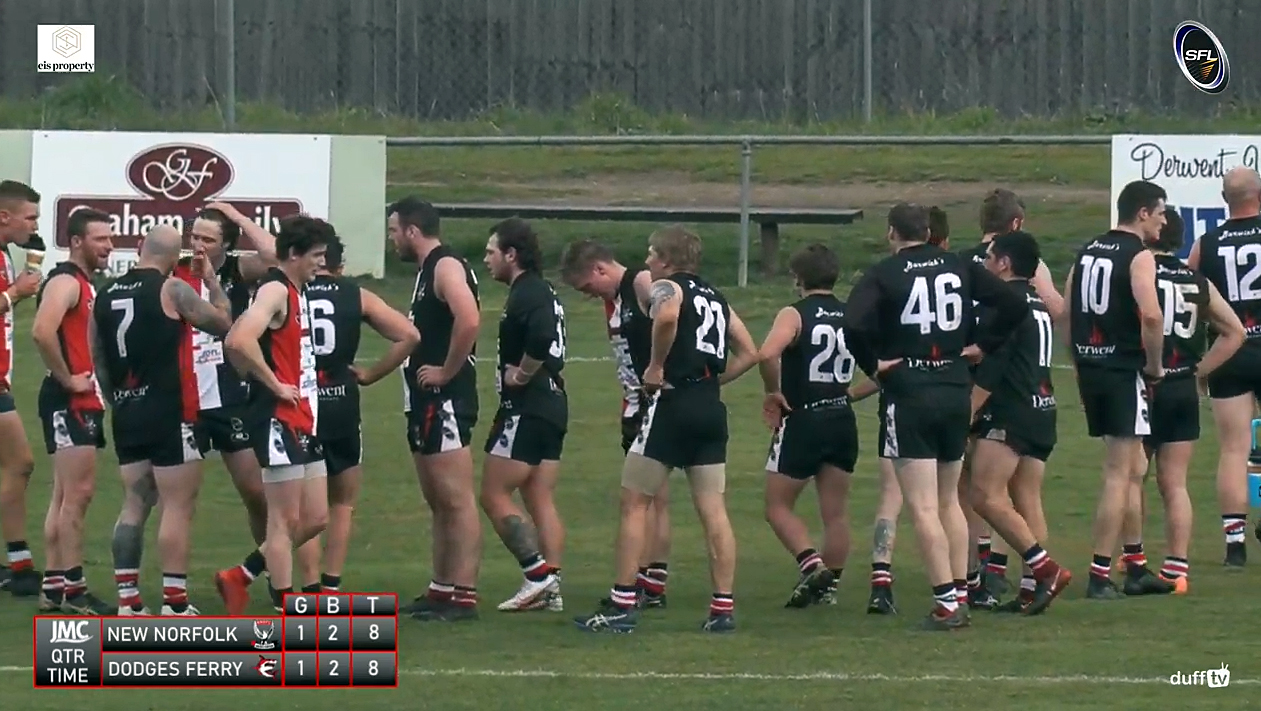 Waterlogged Boyer no haven for the Sharks

IN wet, slippery, and overcast conditions, the Eagles senior team triumphed over the Dodges Ferry Sharks at the big Boyer Oval on Saturday. The home side booted 10 last-half goals to one to run out convincing 76-point victors and go to the top of the SFL ladder.

The Eagles were forced to make several changes to the side that defeated Brighton in the previous round. The Chaplin brothers (Bryan and Brayden) and experienced utility player Blair Wardlaw were all out due to injury. To compensate, Rohan Thomason, Jack Hills, and Corey Lovell were elevated for their first senior games for the season.

Both sides struggled to get any flow into their game in the first term, due to the greasy conditions. In a tight contest with neither team gaining any ascendency, the scores were tied at 1.2 (8) apiece at quarter time. Key matchups saw in-form Eagles back man Josh Farrow line up on the Sharks’ key forward Campbell Hooker – one of two sons of former Eagle Reid Hooker on the field on Saturday. New recruit James Shearing took on the experienced David Hunt; Ben Lovell was up against giant Sharks’ ruck man Matthew Young; and debutant Corey Lovell minded the dangerous Sharks forward Ed Stanley.

The second term opened with the Eagles rebounding from the backline through Corey Lovell passing to captain Jacob Wigg who found spearhead Marcus Parker 30 metres out from goal to steer through his second major. Tyron Rainbird followed with another goal after taking a great high mark in the goal square.

The Sharks hit back quickly through Ed Stanley who kicked their second goal from a tight angle. The Eagles pushed the ball forward once again for a great captain’s goal from Wigg, followed by another from veteran Rohan Heron, who sharked off the pack from 25m out. The visitors kept attacking but found it hard to hit the scoreboard until Sharks full forward Campbell Hooker received a free kick and kicked a much-needed
goal from 45m out.

The Sharks attacked once again, but recruit James Shearing cleared from the backline to the speedy Jye Bearman who hit a perfect pass to Tyson Eiszele 40m out from goal. An accurate kick on the half-time siren gave the Eagles a handy 18-point lead at the main break. The scores were 6.3 (39) to 3.3 (21).

The third term belonged to the Eagles as they added another four goals to the Sharks’ one. The Eagles were getting on top at the centre bounces due to Jake and Jye Bearman, Jacob Wigg, Josh Hills and in-form ruck man Ben Lovell who had the better of his bigger opponent Matthew Young. Sharks veteran David Hunt had to leave the ground due to a knee injury as the visitors struggled to match the home side’s pressure
at the contested ball and were held goalless for the quarter.

The Eagles had the game on their terms and extended their lead to 42 points with scores at 10.5 (65) points to 3.5 (23) at three-quarter time. The Eagles slammed on a further six goals to run away in the last quarter with a big 76-point win which boosted their percentage and placed them on top of the SFL ladder.

Marcus Parker was the dominant forward with five majors. He was well supported by Josh Clifford and Tyron Rainbird, who looks to be running into form with two each. There were several positive signs for the Eagles, with young guns Jake and Jye Bearman and Tyson Eiszele taking charge at the centre bounces along with the more experienced Jacob Wigg, Josh Hills, and Nathan Eiszele in varied rotations throughout
the game.

The Eagles also had a good spread of goalkickers with a total of 10 players involved. First-gamer Corey Lovell had a great negating game on dangerous Sharks forward Ed Stanley restricting him to just one goal along with Josh Farrow who kept Campbell Hooker also to just one major.

The Eagles travel to the TCA this Saturday to take on a new-look Hobart outfit. Come along and enjoy the footy in what has been a tough year for everybody. Go Eagles! – WAYNE WALKER

SFLW: The New Norfolk women’s side met the Kingborough Tigers on Saturday on our home ground. It was great to see some old faces from last season on the ground to ensure we had good numbers for the game. Welcome back. The day started out wet and overcast, but conditions cleared up for the game. The girls worked hard all day, the ball was wet and heavy, but it did not stop them from putting their body on the line. Spectators – who are most welcome – will see most of the players smiling and thoroughly enjoying themselves. They want to be out there on the field representing the Eagles, regardless of their losses. That is pure dedication. They have earnt a lot of respect from the other sides for their determination and for never giving up.  – LINDA McKENZIE

RESERVES: After a good win against Brighton last week, the Eagles Reserves a little disappointing against the strong – top of the ladder – Dodges Ferry outfit, losing by 39 points for a final scoreline of 11.10 (76) to 5.7 (37). The boys tried hard all day in wet and slippery conditions but trailed at every change. Their task was made harder by the loss of Corey Lovell, Rohan Thomason and Jack Hills to the Seniors, and playing coach Corey Ransley to injury.

COLTS: In cold, wet, and slippery conditions, the boys played four consistent quarters of football to lead Dodges Ferry at every change, finally running out convincing winners by 68 points. It was an all-around good team effort to win so convincingly on our home turf after narrowly beating Dodges Ferry on their home turf earlier in the season. In an interrupted season, due to the number of byes, the boys currently sit second on
the ladder and are looking good for finals participation. Their numbers are strong, and we have picked up some talented players which coach Paul Clark is developing into a good competitive side. The boys have another bye this weekend. GREG CHAPLIN