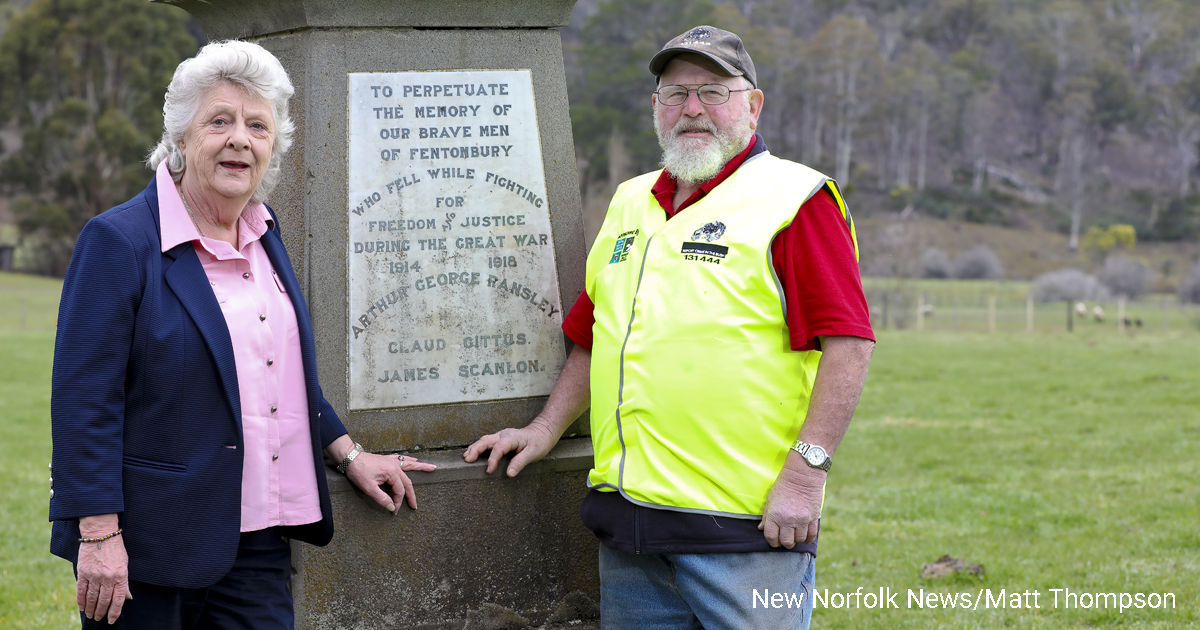 COMMUNITY spirit is rallying behind a lonely and largely inaccessible World War I memorial at Fentonbury in the upper Derwent Valley. Built soon after World War I by the Fallen Soldiers’ Memorial Fund, the monument bears the names of three local men who lost their lives in that first global conflict.

Dedicated to the memory of Arthur Ransley, Claude Gittus and James Scanlon, the memorial’s original location was at the local school, off Ellendale Rd. On New Year’s Day 1930, the school, post office and an adjoining house were destroyed by fire while the locals were at the Bushy Park Show. A new school was built on the opposite side of the road and in 1933 a working bee relocated the Fentonbury Soldiers’ Memorial to the new school.

With the Fentonbury school long since closed and removed, the monument is now isolated in the middle of a paddock. “The only visitors are the sheep and cattle in the paddock,” Westerway Bush Watch co-ordinator Stefan Frazik said.

“At a recent Bush Watch meeting a discussion about the memorial took place and a motion from one of our members got the ball rolling,” he said. “The motion was to approach the Central Highlands Council to apply for a grant to restore the war memorial.”

Research by Central Highlands Council deputy mayor Jim Allwright revealed that although the memorial is in the middle of a paddock owned by local residents Neville and Jeannie Lazenby, the monument sits on its own triangular Crown Land title.

Central Highlands mayor Lou Triffitt told New Norfolk and Derwent Valley News that the council recognised the importance of keeping alive the memory of servicemen and women who gave their lives for their country. “Council has allocated $20,000 to assist with the maintenance of the Fentonbury memorial,” Cr Triffitt said. “Well done to the community for all your work.”

While the finer details of the restoration are still to be determined, the monument requires underpinning to correct its lean towards Ellendale, and fencing and parking need to be addressed. Mr and Mrs Lazenby are supportive of the work to restore the monument and make it more accessible.