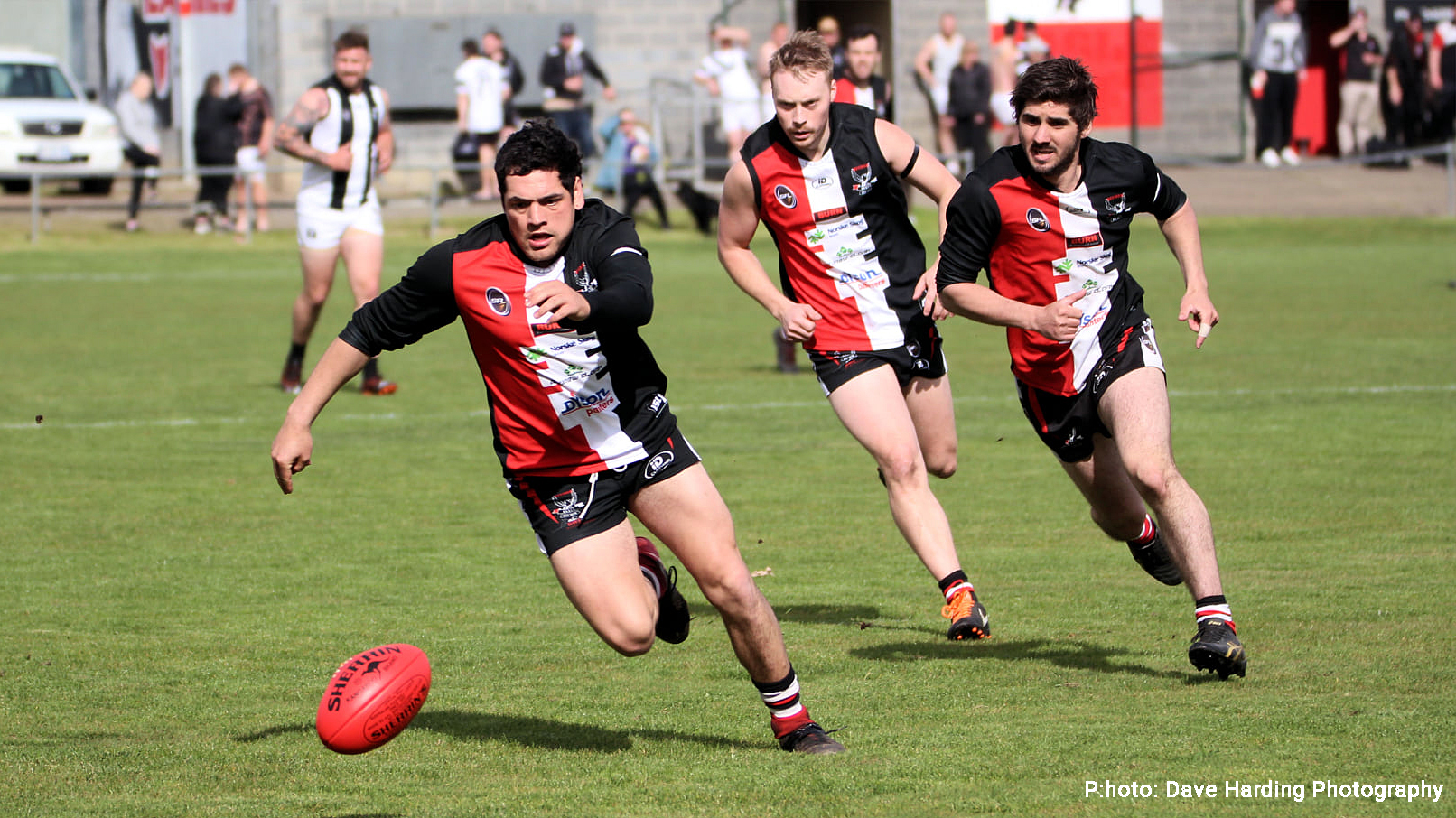 Eagles bounce back against Claremont

THE Eagles jumped from fourth to second place on percentage on the SFL ladder after a 117-point demolition of a struggling Claremont on the big Boyer Oval on Saturday. After an even first quarter, the Eagles gained the ascendency in the remaining three quarters to slam on 18 goals to 2 in a confidence-building win after losing to last season’s premier Lindisfarne in the prior round.

The scoreboard showed only seven points the difference at quarter-time with the Eagles on 4.4 (28) points to the Magpies’ 3.3 (21) points as both sides threw themselves into the contest. Key match-ups early were Magpie Josh Grant lining-up at full-back on Eagle spearhead Marcus Parker; Ryan Bosworth was given the task of tagging young Eagle Jye Bearman; big Eagle back-man James Shearing matched up on Claremont’s high-flying forward Mitchell Walker and in-form Josh Farrow locked down on Claremont playing-coach Luke Potter.

Eagle ruckman Ben Lovell was once again up against a taller ruck duo, this time consisting of Brodie Fewkes and Bradon Pace. Lovell was up to the challenge and had the upper hand at the centre bounces. Talented Eagle forward Tyron Rainbird was proving a hand full for Magpie back men early in the game as he took a fantastic pack mark in the goal square to convert for his first major. Young Eagle Rohan Thomason was in everything and shows great promise for the future.

The Magpies opened the second quarter with Jack Crossin on the ball instead of lining up in his traditional full-forward post along with Simon Bryant who was creative around the ground for the visitors. Eagle full-forward Marcus Parker, who was having a great battle with Josh Grant, gathered the ball at ground level in the goal square to boot his second goal to give the Eagles a 16-point lead early in the second term.

The Eagles continued to attack with several forward entries, only posting minor scores until the in-form Bryan Chaplin snapped truly on a 45-degree angle for a great goal. Eagle captain Jacob Wigg gathered from a centre clearance and passed to Cody Morgan for a great running goal from 40m out. Wigg was dominating around the ground and the Eagles looked dangerous as they went into the main break with a 34-point lead 8.13 (61) to 4.3 (27).

Playing coach Josh Clifford was pleased as the Eagles lifted their intensity around the ball and his main message at half time was “let’s play team football.” That message rang true in the second half as the Eagles were rampant with winners all over the ground.

Tyron Rainbird led the way as the main focal point up forward, taking many marks across half-forward along with Parker, Chaplin, and Clifford. Jye Bearman had a stack of quality possessions, brother Jake was in everything and was strong around the ball. Jamie Sokolski has been a great recruit for the Eagles and was busy for four quarters. Nathan Lester celebrated his 150th club game in fine style and was his usual solid self all day.

The Magpies made a number of moves after half time bringing Mitch Walker into the ruck, Jack Crossin went forward and Kaden Salter on the ball but the Eagles had all the momentum and ran out strong winners 22.21 (153) to 5.6 (36) The Eagles had a few regular senior players missing for this game but were well covered by first-gamers Nathan Ford, Hayden Bielleman and Jeremy Palmer.

New Norfolk has now moved into second position on the SFL ladder with only one roster game to go and will now travel to Pembroke Park this Saturday to take on a struggling Sorell. The boys will need to be switched on to consolidate their position for a double chance and a possible home final.This looks to be one of the tightest finals series in the SFL for a number of years with all sides currently in the final five capable of defeating each other in what should be an exciting conclusion to the 2020 season. Go Eagles!

RESERVES: In what seemed to be reasonably good conditions at Boyer Oval on Saturday, New Norfolk took on fifth placed Claremont, in a must-win game to keep the finals chances alive. An inaccurate Eagle outfit almost kicked the game away in the first term by scoring nine behinds to Claremont’s 2.2 to trail narrowly at the first change. In a blistering second quarter, the home side kicked 5.2 to Claremont’s solitary point to lead by 26 points at the main break.The second half turned into an arm wrestle with both sides struggling to score. Claremont managed to kick 3.2 to the Eagles’ two behinds. A very inaccurate New Norfolk managed to hold on to win by nine points. The Eagles have moved into fourth spot on the ladder and need to win against Sorell this weekend to maintain this position.

COLTS: After losing to first and second on the ladder Southern Storm and Lindisfarne in the last two weeks, the Eagle colts were at home to bottom-placed Claremont in a must-win game. After being slightly disappointing last week against Lindisfarne, the boys held their concentration all day and put up a great four-quarter performance to win by 126 points.Brock Triffett and Jack Miller were outstanding with Miller kicking a game-high nine goals. The boys now sit in fourth place on the ladder and, as with the Reserves, need to win this weekend against Sorell to consolidate this position running into finals.