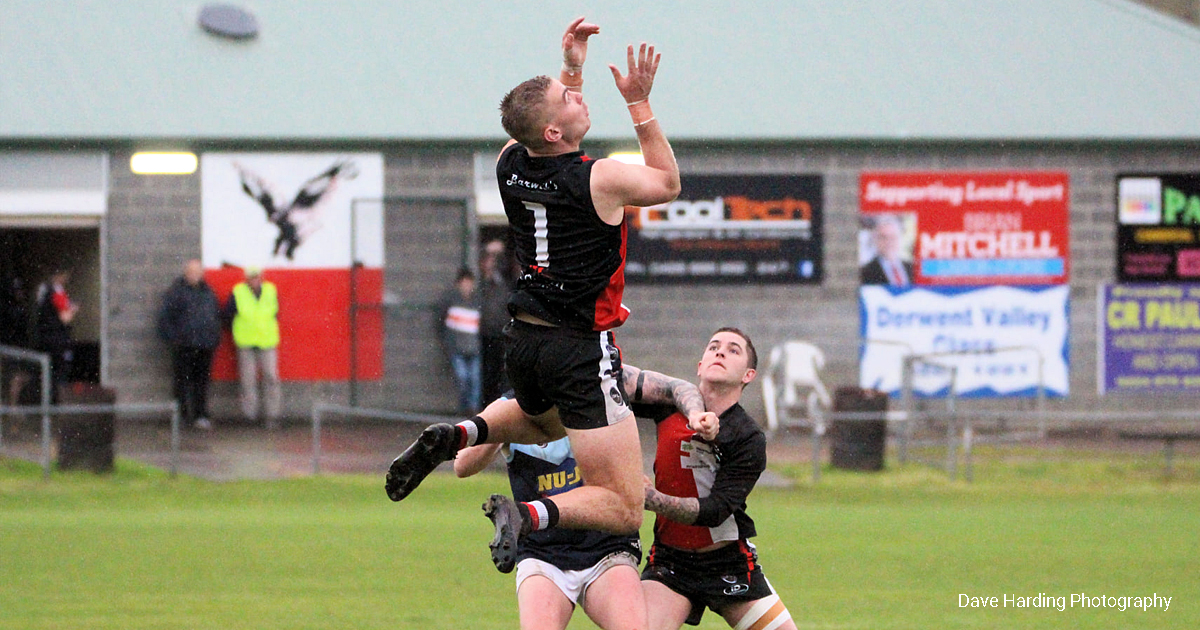 AFTER three quarters of high-pressure finals football, the New Norfolk Eagles could not stop a rampaging Lindisfarne at Boyer Oval on Saturday. The visitors’ final-quarter eight-goal blitz enabled them to run out 56-point winners and move forward to a preliminary final against the Huonville Lions for the right to play Cygnet in the 2020 SFL grand final.

The game was in the balance until late in the third term when the Two Blues managed to jump to an 18-point lead. From that point they took control of the game to end the gallant Eagles finals campaign. After the game, coach Josh Clifford addressed his team in front of a few loyal Eagle supporters.

Clifford made a point that the team should be proud of its improved season and that it is close to once again becoming a dominant force in the league. He also stressed how important it will be for the group to stick together and hit the track to train hard in preparation for season 2021.

Lindisfarne’s key backman Ryan Edmonson was on Eagle full-forward Marcus Parker. The first term saw both sides fighting hard for the contested ball with neither side getting a clear edge. It was a battle of the half back-lines until Eagles captain Jacob Wigg broke clear and short-passed to forward Tyron Rainbird for the first major of the game.

After several minor scores, the Two Blues posted their first goal at the 21-minute mark through Samuel Adams. Moments later Tyron Rainbird executed a magnificent smother and kicked his second for the quarter. After an even first quarter, New Norfolk had two goals and three behinds on the board, to the Two Blues’ single goal and 11 points.

Conditions became difficult as rain fell in the second term, which made for slippery and greasy conditions. Both sides struggled to maintain possession and it was a case of moving the footy forward in any way possible.

Two Blues playing coach Michael Cassidy was first to open the scoring as he grabbed the ball from a boundary throw-in and snapped a six-pointer from the forward pocket. This was followed by another major from Daniel Blazely, to take an eight-point lead.

The Eagles regrouped and had the ball in the forward 50m on several occasions but missed opportunities close to goal through Wigg and Parker. A Two Blues kick-in enabled them to transfer the ball from coast to coast for a goal by the dangerous Samuel Adams.

Lindisfarne booted three majors for the term while the Eagles were inaccurate, managing only six behinds for the quarter. The second term ended with the Two Blues holding a 10-point lead, 4.7 (31) o 2.9 (21).

The third term got under way with the Eagles surging the ball forward through Bryan Chaplin who ran straight into oncoming traffic to win the ball and find Josh Clifford. A pass to Marcus Parker and a handball to Jye Bearman on the run resulted in a great goal at the two-minute mark in what was a fantastic passage of play.

New Norfolk continued to attack but the Lindisfarne back six was solid taking several marks and rebounding from defence. Brad Tennick, Jack Gleeson, Kurt Baker and Daniel Blazely were busy around the ground for the visitors.

Eagle Jye Bearman was looking dangerous around the ground and across half forward. Nathan Eiszele was strong around the stoppages. Jamie Sokolski continued his great form and Josh Farrow had shut Michael Cassidy out of the game.

The Eagles moved into attack mode and once again excitement machine Jye Bearman kicked a great goal on the run from 35-metres out on an angle to put the home side a point in front. Lindisfarne went forward for a minor score, but the Eagles took a six-point lead at the 17-minute mark through Tyron Rainbird who wrapped up his
opponent in a great tackle close to goal. He was rewarded the free for his third goal.

The Two Blues answered with Blazely to Gleeson to Kurt Baker to take a 6-point lead. Tom Roberts received a free kick in front of goal and kicked truly. This was followed by another just a minute later to Samuel Adams who was proving to be a handful for the Eagles. The Two Blues got the biggest break in the game to go out to an 18-point lead at three quarter time 8.11 (59) to 5.11 (41).

The final quarter was all the Two Blues as they slammed on eight goals to the home side’s two, to finish full of running. They combined well from the centre of the ground to the forward line and even though the Eagles had shut down the Two Blues’ key forward Michael Cassidy it was their running and crumbing players that made the difference when it counted. Final scores were Lindisfarne 16.14 (110) to New Norfolk 7.12 (54).

The Eagles can hold their heads high for season 2020. Even though their form tapered off toward the business end of the year, they showed they could match it with the current powerhouse teams in Cygnet and Huonville. They had trouble with reigning premier Lindisfarne but were a step ahead of the rest of the competition.

Senior coach Josh Clifford and assistant coach Robbie Isles did a fantastic job for the year and things look bright for the future. To all those Eagle supporters out there, let us look forward to a full 18 round 2021 season. It is now over to the remaining teams to fight it out for the SFL flag, with Cygnet waiting to see who it will have to face out of the Huonville Lions and Lindisfarne in the big dance.