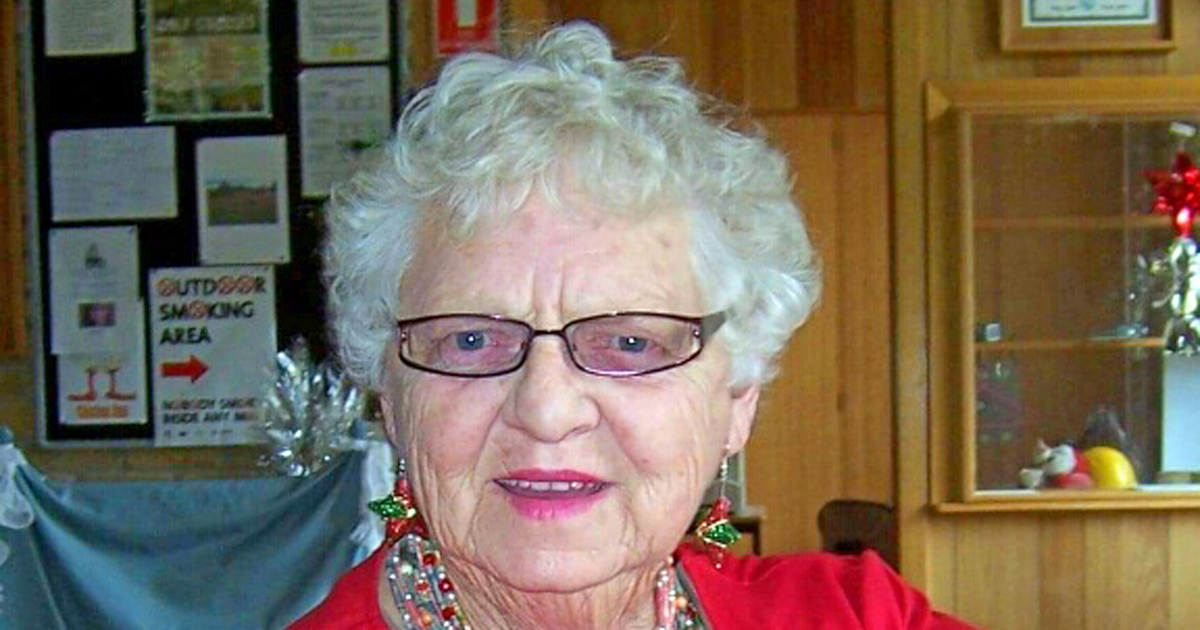 Born at Hobart in 1929, Donna was the daughter of Olive and Keith Anders, and grew up at South Hobart and Sandy Bay. They lived in an extended family home where her grandfather ran a dairy until he died while out delivering milk. Donna’s father was a prisoner of war in Changi at the time, and by the time he returned the farm had been sold.

A great swimmer, she was known as Dazzling Donna the diving damsel, and she twice swam the trans-Derwent – once at age 13 and again at 15 to show her father when he returned from the war. Her first job was at the tuberculosis sanatorium at New Town.

In 1949 she married Greg Bratt and moved to New Norfolk where he was working for Australian Newsprint Mills. They had three daughters in quick succession: Sarie, Erica and Lee. Donna had a shop in High St for a while, and also worked in the office at the Peg Factory.

Around 1955, Donna won second prize in Tattslotto, which paid for a car and a couch. Erica Read remembers the family tradition of jumping into the new year. “We had a big countdown, then jumped off the back of the couch. Sadly, one year we all went through the seats and that was the end of the Tatts couch.”

The family lived at New Norfolk North, the housing estate for ANM workers. Most of the residents were about the same age, recently returned from war and starting their family life in a company town. Erica has fond memories of a full house, friends visiting, Donna’s home-made wine blowing up in the cupboard, and Greg’s photography and the stories he told, as well as swimming in the river, hiking and climbing the cliffs, and hanging out with the gangs of children from Fourth and Fifth avenues.

“Mum iced her first cake in 1957 and her last in 2019. She was a founding member of Cake Decorators Tasmania,” Erica said. “Eight years after the first three girls, they had daughter number four – Paula – the result of a great holiday on Flinders Island.

“We went everywhere as kids, Mum and Dad loved bushwalking, beaches and snow. They also gave us the love of a good read, our creative side, appreciation of the environment and the great outdoors, and – for couple of us – the love of sport and gardening.”

After the girls left home, Donna and Greg travelled extensively on the mainland and to the US. Donna was an A Grade golfer and they went to Queenstown to play golf every March for 30 years. At the Elderslie Golf Club Christmas party she was known for her jokes and bad singing. Dressed as Cher, her costume and rendition of If I Could Turn Back Time was a hit.

She served as Brown Owl for the New Norfolk Brownies, played a big part in getting New Norfolk’s Olympic Pool and swimming club up and running, played snooker at Claremont and volunteered at the New Norfolk Visitor Information Centre.

Donna Bratt died on October 14, aged 91. She is survived by her daughters and many grandchildren and great-grandchildren. A farewell will be held at a time when all family members are able to travel to Tasmania.