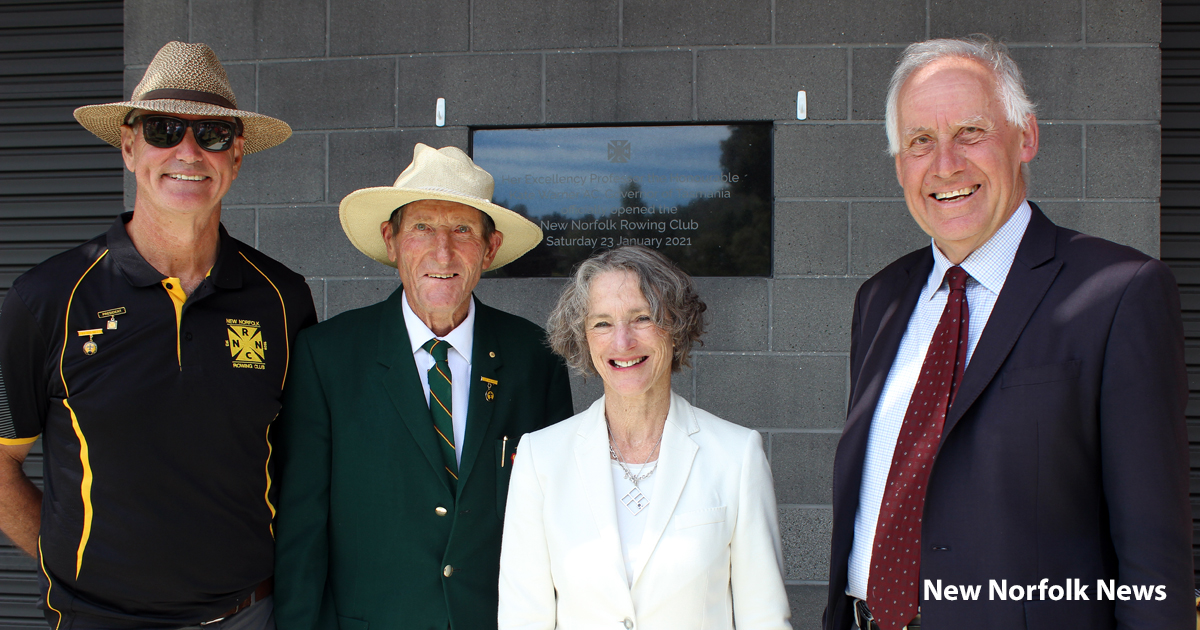 THE new home of the New Norfolk Rowing Club has been officially opened at the New Norfolk Esplanade. Club president Peter Nichols today welcomed official guests to the Derwent Valley Boat House, which was declared open by the governor of Tasmania, Kate Warner.

Mr Nichols said the club had sold its long-term home on the opposite side of the river and put everything on the line to fulfil its 40-year dream of relocating to the town side. Key support had been received from the Derwent Valley Council, Tasmanian Government and the Federal Government.

“We’re enormously proud of what has been achieved, largely led by the volunteer New Norfolk Rowing Club community,” Mr Nichols said. “It’s a $2.4 million building and in terms of the volunteer contribution we’ve put in another probably another half a million, so it’s a $3 million project.”

Mr Nichols thanked everyone who had supported the project and paid particular tribute to treasurer Malcolm McCausland for managing the budget, patron John Shoobridge OAM for his ongoing support and advice, secretary Carol Nichols for her work on the interior design and historical research, and project manager John Bannon for his enormous contribution from start to finish.

In officially opening the facility, Professor Warner noted the long history of the club. “It was established in 1928 and fundraising for the first rowing club shed dates back to 1921 when a little research told us that eight pounds was raised for the construction of the rowing club and, rather intriguingly, those early funds were raised through a fancy-dress football match and that must have been quite something to see.”

Professor Warner said she and her husband Dick Warner were particularly pleased to take part in the official opening. “As many of you know, Dick has been particularly keenly interested in following the development of the project and we are thrilled as longtime New Norfolk residents to be able to be part of this fabulous result,” Professor Warner said.

“As residents, we’ve been long aware of the growing concerns over the safety of the location of the club’s sheds on the north side of the river, with Boyer Rd/Rocks Rd running between the sheds and the launching pontoons. We all know of those near-misses including the situation where the senior eight crew was carrying their boat across the road when a car crashed into the boat and smashed it.”

Professor Warner said the Rocks Rd/Boyer Rd route had become increasingly busy, and the safety concerns had seen the loss of Hobart schools that once rowed at New Norfolk. “New Norfolk Rowing Club has traditionally supported student rowing at government schools including Ogilvie High, New Town High and Elizabeth College and we know that many outstanding rowers, including Olympic medalists and world champions such as Kate Hornsey, here today, have been members of this club at some stage of their career.”

Professor Warner said the Derwent Valley Boat House was not just for rowers, as it would be available for dragon boat paddling and kayaking, providing healthy physical activity for all ages. “The Derwent here is such an ideal stretch of water for boating, so enhancing facilities at the Esplanade is another of the Boat House’s advantages.”

Councillor Ben Shaw spoke on behalf of the Derwent Valley Council, followed by Mark Shelton MHA  representing the State Government and Senator Claire Chandler for the Federal Government. Mr Shelton said the club’s new location and new building marked a significant achievement in the almost 100-year-old club’s history and concluded many years of planning and hard work from club members and volunteers.

“The new facility will help the club to grow membership and competitor numbers and stay strong for years to come. Importantly, this facility will offer a much needed and well equipped social hub for other community functions and events,” Mr Shelton said.

Senator Chandler said it was great to hear that the new facility was already attracting schools from outside the local area to use the Derwent Valley Boat House for rowing camps. “So not only is there an argument that this is a fantastic piece of infrastructure for the local community and the New Norfolk Rowing Club to enjoy, but it is also bringing some additional investment into the area by way of those other clubs from outside New Norfolk coming in to take advantage of the opportunity that it presents.”

After refreshments inside the new function room, former rowing club president Peter Wade was invited to propose a toast to the New Norfolk Rowing Club. This was followed by the cutting of a cake by John Shoobridge, Kelly Graham, Kate Hornsey and Molly McCausland representing four generations of New Norfolk rowers.