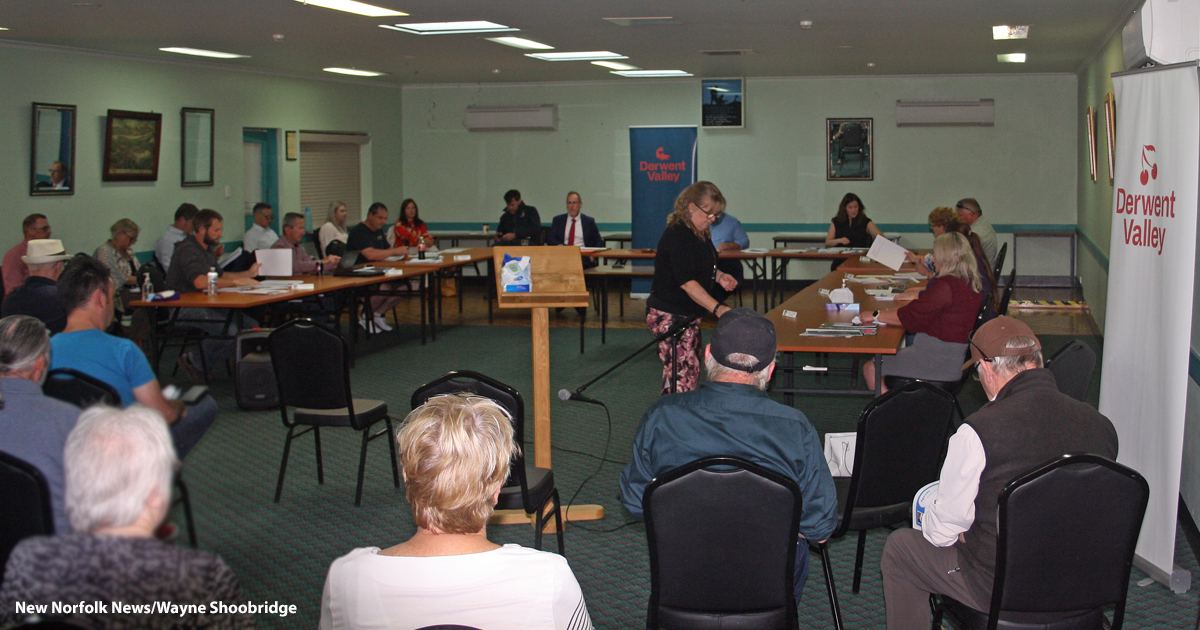 Council meetings back in the open

ABOUT 15 members of the public took the opportunity to attend the first open meeting of the Derwent Valley Council since the start of the coronavirus pandemic. The council has been meeting behind closed doors since last March and is one of the last to return to public sessions.

Under the council’s COVID-Safe plan the Circle St courthouse is deemed too small for public attendance at council meetings. Last night’s meeting was scheduled to be held in the council social rooms but was relocated to the RSL Club’s function room due to water damage sustained during a storm two weeks ago.

The meeting got under way just after 6pm with all eight councillors present, joined by 10 members of staff. Mayor Ben Shaw remarked later in the meeting that there were a number of new faces among the staff since the public were last allowed into a council meeting. Most councillors appear to have given up standing when addressing the meeting and few appeared to be using their council-issued iPad computers.

Former councillor James Graham was the first person to ask a question under the council’s new Question Time policy. Mr Graham asked whether the council would have a community engagement schedule for this year and Mr Cheetham advised that this would be presented to the February council meeting. Mr Graham also asked about a report relating to the High St market expressions of interest that had been due to be presented to the January council meeting. General manager Dean Griggs said a survey on the economic impact of the market had been completed and was likely to presented to the council in February or March. There were no other public questions.

Guest speaker Allison Clark addressed the meeting for about 15 minutes to update the council on the community consultation process for the its Waste and Resource Recovery Strategy. Ms Clark said the process had been extended due to the pandemic, which had limited face-to-face discussions but online and telephone conversations had taken place. She said the draft strategy had been well received.

Two items on the agenda were removed from consideration by the councillors. Cr Shaw said the general manager had requested the withdrawal of the report dealing with future use of the visitor centre in Circle St, as additional information had been received after the report was written. Councillors also agreed to remove a report on the proposed transfer of the Granton Memorial Hall ownership to the council.

Cr Paul Belcher declared a potential conflict of interest and left the room while councillors considered a planning application for the partial demolition and alterations to a heritage-listed building at 12-16 George St, New Norfolk. The report noted that the work involved 16 George St only, and not the adjoining buildings. Documents submitted to the council showed the properties to be among the oldest in New Norfolk, dating to the 1830s. Heritage consultants supported the removal of the western wall of the cottage to return it to its original dimensions and provide a wider driveway. The application was approved.

The council noted the granting of approval by staff to 22 other development applications in December, following the same number being approved in November. The December approvals included 12 dwellings, a retirement village, a three-lot subdivision, a private boat ramp and the use of the Esplanade for a hydro-bike hire service. Councillors also received and noted the minutes of the Friends of Willow Court, Derwent Valley Tidy Towns, Derwent Valley Youth Future Action Team, and New Norfolk Business Alliance Special Committees.

TasWater’s proposal to decommission the artificial wetlands adjoining its Turriff Lodge sewage treatment plant was unanimously supported by councillors. Deputy mayor Jessica Cosgrove said she looked forward to the area being redeveloped as community open space. Cr Martyn Evans said he hoped provision would be made to protect the platypus and other wildlife known to inhabit the wetlands, but nothing to this effect was included in the council decision.

The process of disposing land and buildings at Willow Court by sale or lease will continue despite objections being lodged with the council. Council officers said the two objections were “not of sufficient weight to warrant a reversal of council’s decision to dispose of the land.” Councillors voted unanimously to proceed with the disposal process after the appeal period had passed. It is proposed to sell or lease land and buildings at Willow Court knowns as the Barracks, Alonnah, Bronte, Carlton and Occupational Therapy, and open spaces known as the barracks forecourt, Bronte forecourt, Carlton exercise yard, Carlton high-security yard, and two Alonnah exercise yards.

Two grant programs were approved, with $20,000 to be offered for local Covid-19 small business recovery, and $20,000 for community projects. A draft policy for the Small Business Recovery Grants was approved for release for public comment. The two grants programs are scheduled to open for applications in April.

The mid-year budget review was accepted with a minimum of discussion. Cr Frank Pearce was the only councillor to comment on the review, which sees the council’s operating deficit forecast to increase from the budgeted $1.47 million to $2.05 million for the current financial year. The chief financial officer reported that all savings identified during the review had been offset by additional expenditure or reduced income.

The open section of the meeting concluded with councillor questions:

Councillors then voted to exclude the public and go into closed session to discuss reports relating to 5/9 Grey St, New Norfolk; Frescati House at New Norfolk; land tenure for the New Norfolk Rowing Club; the audit panel’s annual report; the closed senior management report; and requests for leave of absence. Cr Shaw did not remain for the closed meeting.