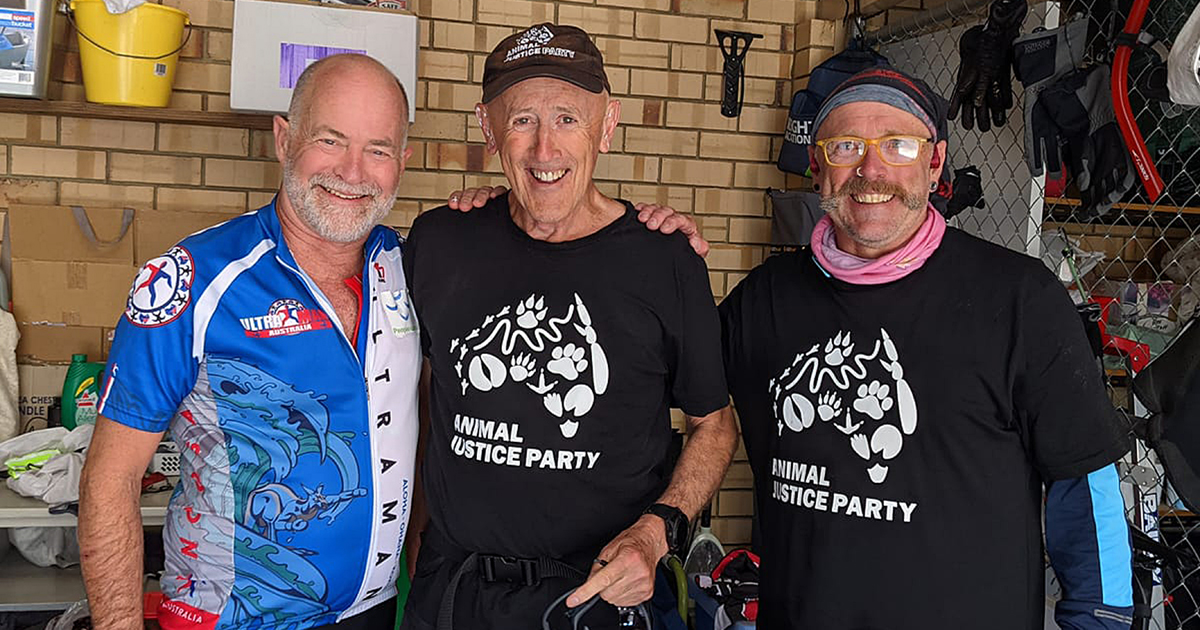 LEGISLATIVE Council election candidate Ivan Davis has completed an ironman-style triathlon within the Derwent electorate to promote his campaign and raise awareness of animal issues. Mr Davis, of Claremont, is the Animal Justice Party candidate for the seat of Derwent, which is up for election this May.

Despite being relatively new to ironman events, Mr Davis swam 4.1km, cycled 186km and ran 42km in a gruelling day of campaigning on January 7. He swam in the Derwent, rode to Bothwell via New Norfolk, and ran, jogged and walked through the Northern Suburbs of Claremont, Austins Ferry, Granton, Bridgewater and Gagebrook. He started out at 4.15am and completed the task at 2.30am the next day.

“Now that this challenge is over, I will start door knocking every door I can get to between now and the election that is due in May. I bet I will learn a lot more during that endeavour,” he said. He invites campaign donations via an online portal.

At present Mr Davis is the only confirmed challenger to Labor’s Craig Farrell who has held the seat of Derwent since 2011 and has served as president of the Legislative Council since 2019. Mr Davis said the Animal Justice Party was the only political party in Australia dedicated to protecting all animals.

“With three members of parliament, and two councillors now elected, the party is rapidly becoming a political powerhouse for animals. Our Victorian and New South Wales MPs are already taking huge steps forward for animals, holding the government to account, and introducing bills to end animal cruelty,” he said.

His January 7 triathlon began at Bridgewater in the very early hours of the morning. “Entering the water in the dark pushing through weeds, reeds, and river debris, a few fish startled out of the shallows, reminding me of our inconsistencies around animals – we protect and revere some water creatures and have no trouble eating others,” he said. “I started swimming at 5am and to experience the valley, the suburbs, the sunrise from the dark water was magnificent.

“Four kilometres later, it was onto the bike for a 186km round trip to Bothwell via New Norfolk. The violence on the roads was very clear on this journey – I lost count of the dead animals. How quickly changes would happen if they had been human casualties.

“While riding, I was reminded of an old cantankerous kangaroo years ago. He would not move from the centre of the road. Sometimes kangaroos will mourn their dead mate, child, or parent for years. They revisit the remains or the spot where their companion died and linger there.

“Many of us dominant, impatient humans don’t stop when we are involved in a collision with an animal. Imagine a future where drivers must stop and attend to any animal they hit. Maybe then drivers would slow down when animals are out and about,” Mr Davis said.

With the ride finished at 5.30pm, it was on to the 42km run. “Although I have done a few endurance events over the years, on this night I went further into pain and misery than I have ever been. By 2.30 am it was all over, all 42.16km,” Mr Davis said.

“Every single day we choose what we pay attention to, we choose what sort of impact we make and what sort of world we want to live in. Most of us disapprove of violence and will choose kindness, right down to teaching a child not to step on a caterpillar – which has benefits for both. A kinder world for animals means a kinder world for us human animals too. The link between violence towards animals and violence towards people is well established.

“When an animal cruelty case hits the headlines, outrage at the perpetrators and concern for the animals shows that people really care. This has been my experience in talking to voters in the Derwent electorate. People do care about the treatment of animals – as demonstrated in the community’s outcry at the culling of geese and ducks at Tynwald Park last year. Should the voters elect me, I will support their expectations for better treatment of animals. I will work to stop cruelty and violence towards all who breathe, feel and suffer.”