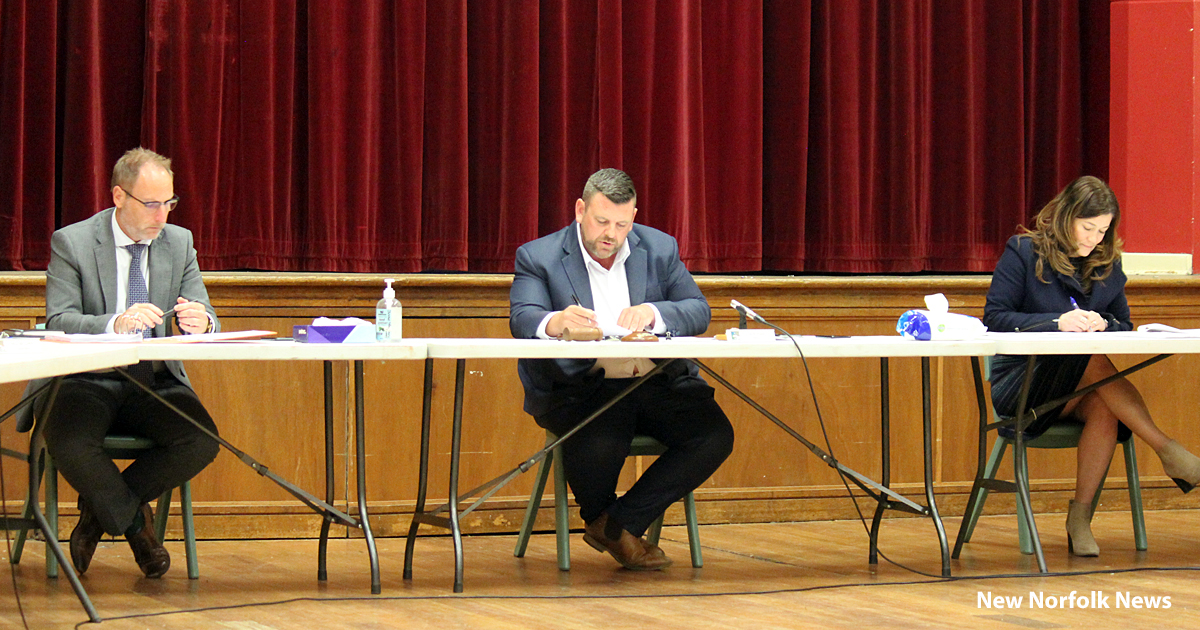 THREE councillors were absent from tonight’s Derwent Valley Council meeting in the New Norfolk War Memorial Hall. With a reasonably brief agenda, the meeting lasted just over 30 minutes. Eight members of staff were in attendance and mayor Ben Shaw explained that they were present to provide advice if it was required.

Opening the meeting Councillor Shaw announced that councillors Martyn Evans, Frank Pearce and Natasha Woods would be absent. He invited questions from the approximately 13 members of the public in attendance.

Up first was tourism operator Liz Virtue who asked why the Pioneers Tribute Wall in Arthur Square had been chosen for the location of the Peter Hudson statue when there was an abundance of space available, and she asked whether stakeholders had been consulted before the wall’s sudden demolition last week. Cr Shaw said the matters of the statue and the wall were not linked. “They are two separate pieces of the recent master plan adopted by council,” he said. “The Pioneer Wall was touted to be removed and the plaques were going to be moved because it was stated in the consultant’s report that it probably wasn’t the best space for them and they should find a better place to recognise the pioneers and then of course the statue was another separate project which was in the same document.” General manager Dean Griggs said the dismantling of the wall had been poorly handled and the council was now seeking to engage with the originators of the wall, the families involved, and the historical society. The pioneer plaques would be displayed in the council foyer until a new home was found in the community.

Former councillor James Graham asked about the status and total cost of the upgrading of the council’s property and rating system, and this was taken on notice. He also asked whether the council’s audit panel had expressed disappointment about the absence of last year’s financial statement and the performance of the Tasmanian Audit Office., and whether next year’s annual report would be available two weeks prior to the annual general meeting. The general manager took the question on notice.

Trish Roy-Smith asked what was being done about the prevalence of unregistered dogs escaping their yards and biting passersby. Mr Griggs said he would like to have the new dog-catcher meet Mrs Roy-Smith to understand the problem. Mrs Roy-Smith suggested that due to the size of the municipality there ought to be two dog-catchers on staff.

Former council dog-catcher David Dwyer is the new co-chairman of the council’s Bushy Park Swimming Pool Committee and he asked the mayor to address rumours that the council intended to close the pool. “I don’t know whether it is true, the rumours haven’t been coming from the council as far as I know,” Cr Shaw said. “It hasn’t been discussed at any workshops or meetings that I have attended,” he said. The mayor said he would take the question on notice and check to see if the matter was covered in the public open space document.

Holly Marshall asked whether the new playground and barbecue area now under construction at the New Norfolk Esplanade would be fully-fenced, with child safety gates, due to the very close proximity to the car park and river. Infrastructure executive manager Amanda McCall said there would be a fence. Cr Shaw said a similar question had been received from Anne Salt, who was not present at the meeting.

Next on the agenda was the tabling of a petition calling for a 40km/h speed limit and mirror on Douglas Rd, Molesworth, for the safety of residents and visitors. The petition itself was neither tabled nor sighted, save for a written description that it contained 30 signatures and was in compliance with the Local Government Act. The five councillors present voted unanimously to “note” the petition.

Councillors received and noted the mayor’s monthly activity report without comment. The monthly financial report was received, with Cr Julie Triffett saying she had experienced trouble understanding the document. Chief financial officer Bill Richardson apologised if alterations made since the last meeting had rendered the document less user-friendly.

The monthly report on planning permits issued by staff members acting under delegated authority also passed without comment, including the demolition of a heritage-listed former kiosk building in the centre of the New Norfolk Esplanade. Eight planning permits were issued under delegation during the last month, including a subdivision at Ring/Glebe Roads in New Norfolk; four new dwellings and an outbuilding; a new water treatment plant at Bryn Estyn; and buildings and works on the Esplanade. This number was reduction from the 22 permits issued in the previous month.

Discussion of a report on public toilets in the municipality provided the first official acknowledgement that previously allocated funding for public toilets at Bushy Park had been diverted to Westerway. Liberally sprinkled with errors, the Derwent Valley Council Toilets Review did not sugar-coat the state of the municipal conveniences, rating most of them as average. The council’s newest public toilet, in Circle St, was described as having poor ventilation, and poor-to-average external condition. The Esplanade, Granton and Maydena toilets were the only ones rated as “good.” The report noted that the council spent $138,2000 maintaining its toilets each year. Responding to a question from Cr Paul Belcher, Ms McCall said the long-delayed Westerway toilets should be completed by the end of the financial year. Cr Shaw said councillors could now mount their own cases for toilet improvements at budget time. “There was already money put aside for Bushy Park,” Cr Belcher said. “Yes, it was moved to Westerway,” Cr Shaw replied. Closing the discussion, Cr Triffett said the report noted that towns were often judged by its public toilets. After a four-minute discussion, councillors agreed unanimously to note the report, develop a public toilet strategy, undertake a condition assessment for each toilet block; and consider engaging consultants to review each facility and determine whether replacement or refreshment was the preferred option.

Councillors also gave unanimous approval to the “Delivering Our Valley: Advocacy Roadmap”, which might be better described as a funding wishlist. Cr Triffett said it was important that the council had a document that put its priorities in order. “It is well-written and has got lots of pictures, which I like,” she said. With no other speakers, this $38 million wish-list was approved in one minute. This included a request for $100,000 to advance Cr Shaw’s proposed Kensington Park sporting precinct, but not the estimated cost of $20m to build it. Provided to the meeting by general manager Dean Griggs, the document describes four “game-changers” as the activating of Willow Court; establishing public transport beyond New Norfolk; improving access to the River Derwent for tourism and recreation; and improving the appearance of our towns. Future funding requests include: $2m to complete the rehabilitation of Glenora Rd; $650,000 for Benjamin Tce and Fitzgerald Crescent improvements; $900,000 for Pioneer Ave improvements including “reduced carriageway”; $1.6m Derwent Valley Waste and Resource Recovery Strategy; $2.2m for implementation of the New Norfolk Town Centre and Precincts Urban Design Strategy; $780,000 for lighting and women’s changerooms at Tynwald Park; $9.7m to assist partners (New Norfolk Distillery, Agrarian Kitchen and Barracks Art Centre) at Willow Court; $100,000 to study future needs of the Lyell Hwy; $20,000 for a health services study; $20,000 to study public transport challenges; $20m to refurbish the Derwent Valley railway line; $100,000 for a study of the feasibility of converting the New Norfolk War Memorial Hall into a performing arts centre; and $100,000 master plan for a Kensington Park Sporting Precinct.

The open section of the meeting concluded with councillor questions:

NOTE: Acoustics in the memorial hall tonight were dreadful, which is often the case for meetings in that venue. This report will be checked against the official recording when it becomes available. Anyone who feels their comments have been misheard is welcome to email damian@newnorfolknews.com.