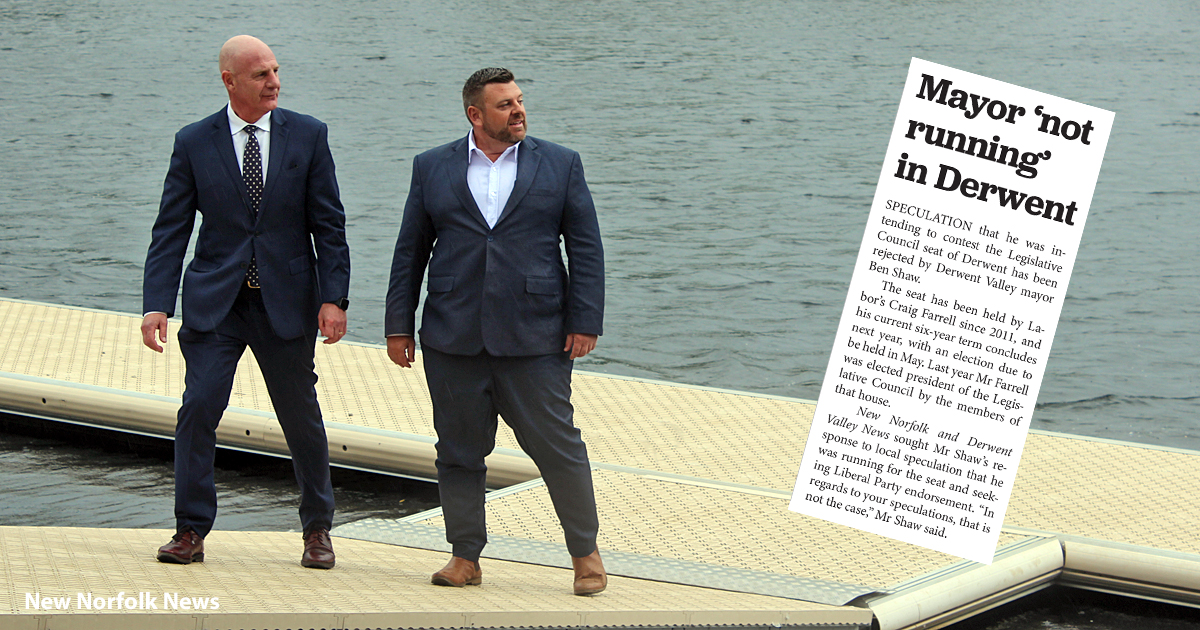 CONFIRMING the Derwent Valley’s worst-kept secret, Premier Peter Gutwein has today announced that Derwent Valley mayor Ben Shaw will contest the Legislative Council seat of Derwent as an endorsed Liberal Party candidate. This comes several months after Mr Shaw said there was no truth to speculation to that effect.

An election will be held on May 1 to determine who will represent the division of Derwent in the Legislative Council. The sitting member, New Norfolk’s Craig Farrell, also serves as president of the Upper House and has been endorsed to defend the seat as a Labor candidate. Claremont’s Ivan Davis also also contesting the seat, representing the Animal Justice Party.

“Ben’s council, and the work that he has done here in the Derwent Valley, has been such that as we drove in today I was so very pleased to see the work that is going on. I know that Ben is determined to ensure that our strong plan can continue. I don’t believe we could get a better candidate here in the Legislative Council seat of Derwent,” Mr Gutwein said outside the New Norfolk Rowing Club this morning.

“I’m very pleased that he will be our candidate. We know that we go into this campaign, against an incumbent, as the underdog, but we will do everything we can to ensure that the Liberal Party and its plan are at the forefront of people’s thinking as we go into this election. I’m very, very pleased that he has decided to stand with the Liberal Party,” Mr Gutwein said.

Mr Shaw said he was excited to announce his election plans. “I really want to be part of a really strong Peter Gutwein-led government. I think Labor has taken this Derwent region for granted for too long and we need a strong government and strong leader, as Peter Gutwein is, to lead us into economic recovery. I think that’s my challenge and I think I can bring the community along.”

Mr Shaw said he would continue in his role as mayor throughout the campaign. If successful he would have to stand down from the council. He said he was confident he could defeat the sitting member, Craig Farrell, who was described as very popular by a television journalist . “I don’t do anything unless I can win. I am a winner, I love to win at everything I do. I’m very popular in the area as well, involved in lots of sporting groups and community groups throughout my whole life.

“I’m a New Norfolk boy, born and bred. I was born in New Norfolk Hospital, went to New Norfolk High School, and now I’m a leader of our community. I think I have the popularity to beat Peter, sorry Craig, with the Liberal Government, and Peter as the leader I think we have a real good shot.”

“I think it’s important to be part of a team. I’ve been part of teams all my life and I think it is important to be part of a strong team and I think the Liberal Party is the only team that actually can take us forward as a community. Labor has held this particular seat for over than 40 years and they have been in government, and throughout my lifetime I haven’t seen a whole lot of money spent in the area and things done for this area in particular.

“Since I’ve been in local council and local government, the Liberal Government both state and federal have actually put in a lot of effort into helping us with our infrastructure here. Only just last election they gave us $2.5 million for one of our worst roads in the community, the Glenora Rd; this facility that we are standing at today is a $2.5 million facility funded mostly by the Liberal federal and state governments; they are just one of many projects that the Liberal Government have helped out community with.”

Responding to a television journalist’s question about being required to apologise for comments made about Dick Warner, husband of governor Kate Warner, Mr Shaw said the matter had arisen from a misunderstanding. “Richard and I are actually on good terms. We’ve had several coffees since then and he would tell you that, I’m sure. So now, I think it was more of a misunderstanding than anything else.”

Mr Gutwein congratulated Mr Shaw on a “good job” making his announcement in front of assembled media. Asked to comment on Mr Shaw’s relationship with Mr Warner, he said public life was always robust. “Mr Shaw has explained that comments were made, perhaps taken out of context, but he’s got a good relationship with the governor, the governor’s husband, as he’s explained.

“The reason that he’s standing is that he gets things done. I want people in my team who are prepared to take a position, that are prepared to deliver for their community. As I said, as you drive into this town today, the houses going up, the jobs that are being created, Ben’s been the leader here and he’s done a fantastic job. He’s going to help us to deliver our plan to keep people safe, to grow an economy and ensure we provide jobs for Tasmanians.”

Mr Shaw did not address his change of heart since telling New Norfolk News he was not contesting Derwent as a Liberal candidate. “In regards to your speculations, that is not the case,” Mr Shaw said last October.