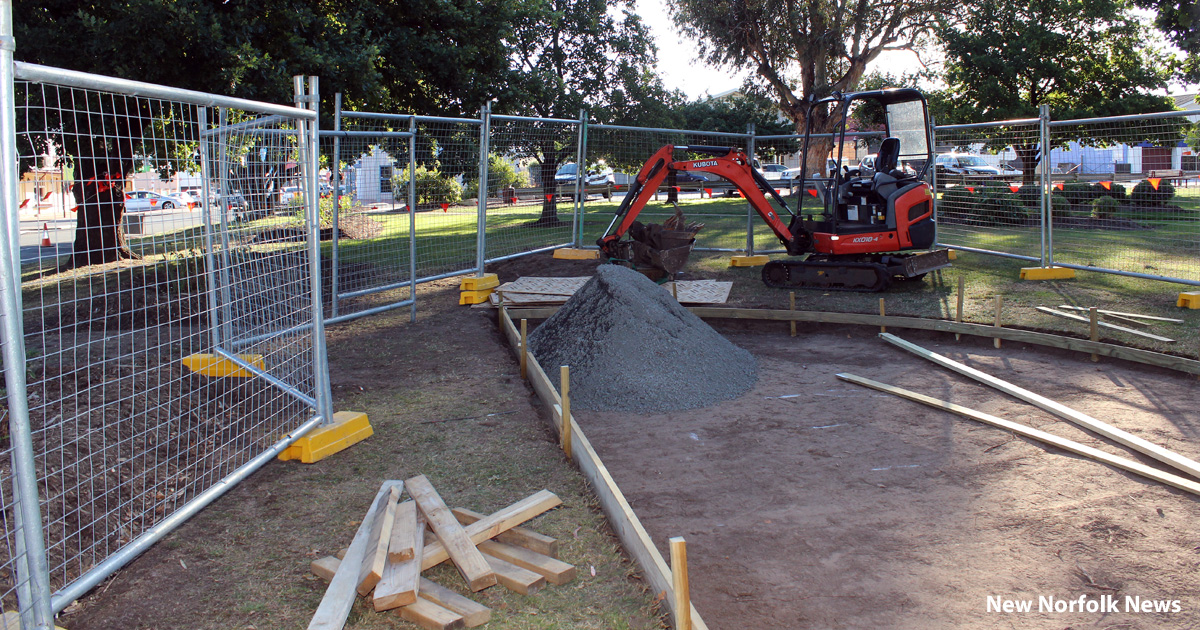 A WALL remembering the contributions of pioneer families of the Derwent Valley has been demolished to make way for the statue of football great Peter Hudson. Onlookers last week were shocked to see the wall being knocked down and questioned what would become of the family plaques.

With the statue due to be officially unveiled at Arthur Square on March 1, site works began in earnest last week and the “Early Settlers” wall was demolished on Wednesday. A council spokesman said the works were classified as “public art” in the Derwent Valley Council Planning Scheme and did not require a development application. The families which had paid for plaques on the wall had not been specifically consulted.

After receiving the New Norfolk News’s request for information, details of the works at Arthur Square were published on the Derwent Valley Council’s Facebook page, noting that the project included “the installation of the Peter Hudson statue in line with the endorsed Urban Precinct Master Plan.”

The Facebook post continued: “The Pioneers Wall has been removed and plaques returned to council. These plaques will be incorporated into a new proposed stage installation as part of the ongoing revitalisation of the New Norfolk Esplanade. The upcoming community project is to be funded from grant funding and is expected to commence before the end of 2021. The reinstallation of the plaques will be in consultation with local historical groups. Community consultation and public advertising of the masterplan was conducted late last year with the master plan being available on council’s website.”

The first public draft of the Urban Precinct Master Plan mentioned the removal of the Early Settlers wall but gave no details or explanation. It also specified the removal of garden beds including those dedicated to the memory of those lost to cancer and suicide.

The final draft of the master plan, approved by the council in December, included the installation of the Peter Hudson Statue on the site of the Early Settlers wall, but preserved the memorial garden beds. The first draft of the plan had sited the statue at the corner of High and Stephen streets.

The tribute wall was an initiative of the late Dorothy Robinson OAM, and was officially opened on Australia Day in 2013. The $11,000 cost was covered by a Federal Government grant. The wall had 104 spaces reserved for the families of early settlers and pioneers.

The first three plaques recorded the contributions of the Cawthorn, Laskey and Miller families. Descendants of those families attended the official opening by the then Federal member for Lyons, Dick Adams. At the time, Mr Adams said New Norfolk was a community that valued its history and it was fitting to have a way to recognise the many pioneering families still living in the area. Mr Adams said he looked forward to seeing more families added to the wall. “Researchers love walls like this,” he said.

Following Mrs Robinson’s death, responsibility for the wall was transferred to the New Norfolk Historical Information Centre. Further plaques were added, recalling the Triffitt, Cranfield and Shone families. Each family was responsible for covering the cost of its plaque, which was understood to be about $300 each. It is understood that the historical centre was not consulted about the demolition.