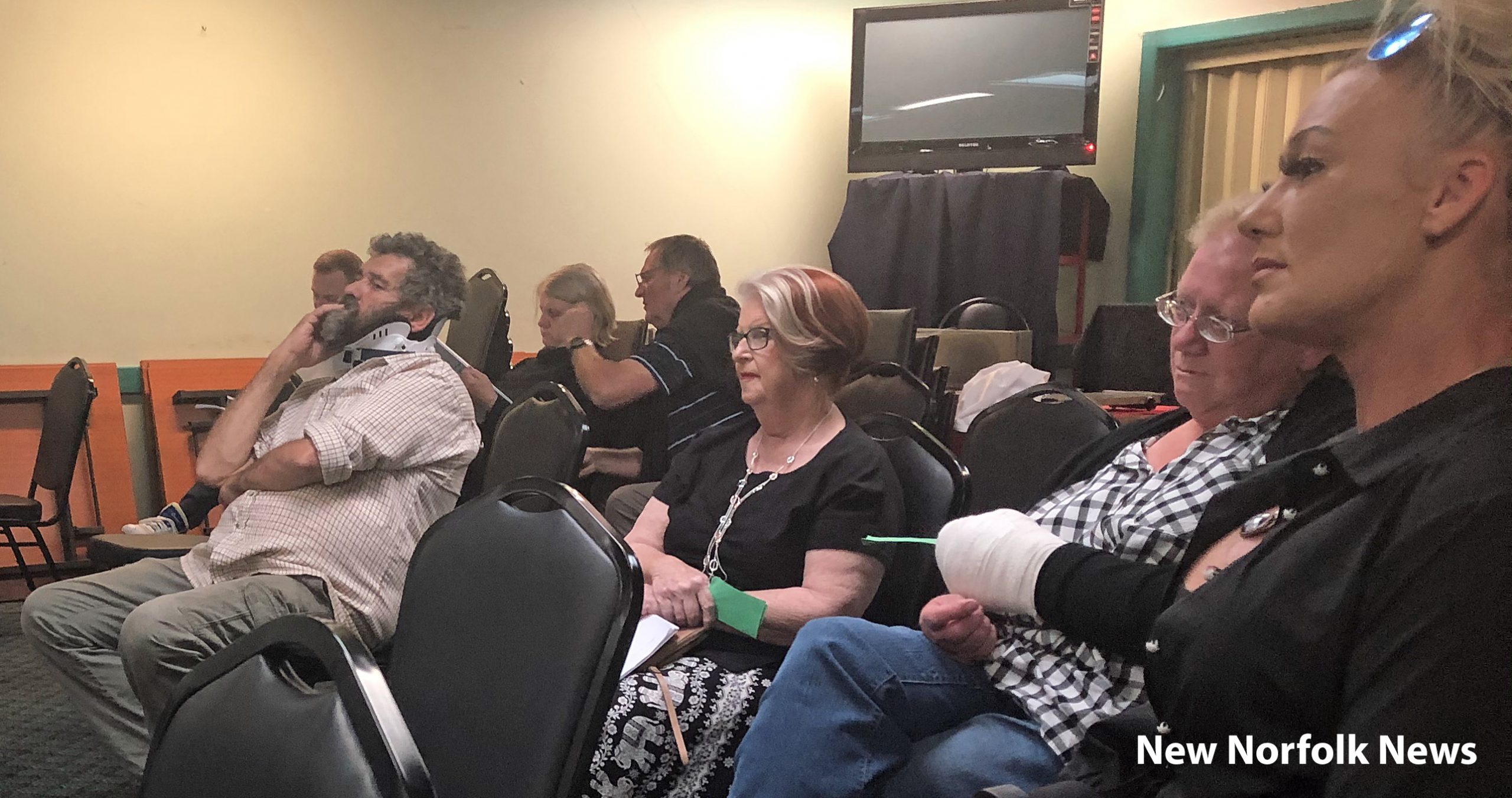 LAST week’s twice-delayed annual general meeting of the Derwent Valley Council was the most low-key in recent years. With three councillors absent from the meeting, the small public gallery outnumbered the elected members. Lasting about 23 minutes, the meeting was also one of the shortest AGMs of late.

There were six members of the public present when the March 9 meeting began, and the numbers shortly swelled to nine with the arrival of three members of the Derksen family. Councillors Frank Pearce, Paul Belcher and Martyn Evans were absent, and two representatives of New Norfolk and Derwent Valley News were in attendance along with six members of council staff.

Acceptance of the minutes of the last AGM held on December 12, 2019, was moved by Cr Julie Triffett and seconded by Mr James Graham. The five councillors and Mr Graham voted in favour of the minutes, and the five other members of the public present at that time abstained from voting.

The next item, acceptance of the annual report, was moved by Mrs Liz Derksen and seconded by Cr Natasha Woods. The five councillors and five members of the public voted in favour of the motion and four abstained. Mr Haydn Pearce asked whether the council had finished “in the red or in the black” and chief financial officer Bill Richardson advised that the council had ended the financial year in the black.

Presenting his report, Cr Shaw said it had been a tough year. “It was extremely tough for council and all of our communities. We had obviously, COVID-19, was a very negative impact on council. We made the decision, as did all councils across Tasmania, to not interest rates, to offer hardship policies and those type of things. So we forgo quite a bit of income and it was extremely tough.,” Cr Shaw said.

“But on the flipside we did come out of COVID-19 pretty strong. Our community really rallied behind each other and rallied together. A lot of businesses actually thrived during COVID-19 because our community was supporting each other, which was really great. We’re on a record number of development applications here in the Derwent Valley at the moment, so that’s obviously helping with our income and those types of things and that also brings future rates and revenue as well and bring more people into the community as well,” Cr Shaw said.

“The other good thing, fantastic that we’ve got our new general manager, Dean Griggs. He’s been with us a bit over nine months now and I think he’s been really well received in the community. And I think the council’s in a really good place to move forward and provide the services that we need to the Derwent Valley.” he said.

Two members of the public submitted written questions about the lateness of the AGM. Mrs Anne Stephenson asked why the meeting and the annual report were late. Cr Shaw said this was down to the Tasmanian Audit Office being late. “They were late. All councils in Tasmania were given an extension anyway, due to COVID-19, but the Tasmanian Audit Office were late getting their report back to us, so we had to delay it and put it off and we’ve only just received it last week. So that was essentially the main reason. Thank you.”

This reasoning was questioned by James Graham. Originally scheduled for December, the AGM was postponed to February 25. The auditor-general’s office was blamed when the meeting was deferred again in mid-February. Mr Graham pointed out that the council copy of the financial report was signed by the general manager on Friday, February 19, and was signed by the audit office three days later, on Monday, February 22. “Is there a different explanation for the delay in having the AGM?” Mr Graham asked.

The general manager said there was no “different explanation” but it would be worth hearing the background to the process leading to the signing of the financial report, including a “whole range of internal deadlines”. He asked chief financial officer Bill Richardson to explain: “Yes, the audit office will not furnish us with their audit opinion until we furnish them with a management representation letter, and they won’t accept the management representation letter unless it’s dated almost on the same day that they issue their audit opinion. So under these circumstances the general manager signed the audit opinion on Friday afternoon after receiving notification from Tas Audit Office that they had finished their audit. They then received the letter on late Friday and issued their audit opinion early on Monday morning.”

Mr Graham also questioned the approved minutes of the 2017 AGM, where a motion was declared to have failed, despite the number of “ayes” exceeding the “noes”. He also asked how 33 votes could be counted when only 29 voters were present. The mayor took the question on notice.

Mr Graham then put two motions to the meeting for consideration. He moved and Mrs Trish Roy-Smith seconded, “that the Derwent Valley Council develop a business case, as part of waste mitigation, for introducing glass recycling bins.” This motion was carried with 14 in favour and one abstention.

Mr Graham also moved, and Mrs Marg Gaby seconded, “that the council make a decision to include, on behalf of the community, a funding request of the estimated cost of $20,000 to undertake a health needs and service demand study of the Derwent Valley in the next budget.” This motion was carried, with 12 votes in favour, one against and two abstentions.

With no further business, the meeting closed at 5.55pm. The two motions carried by the meeting will be considered at the next monthly council meeting.