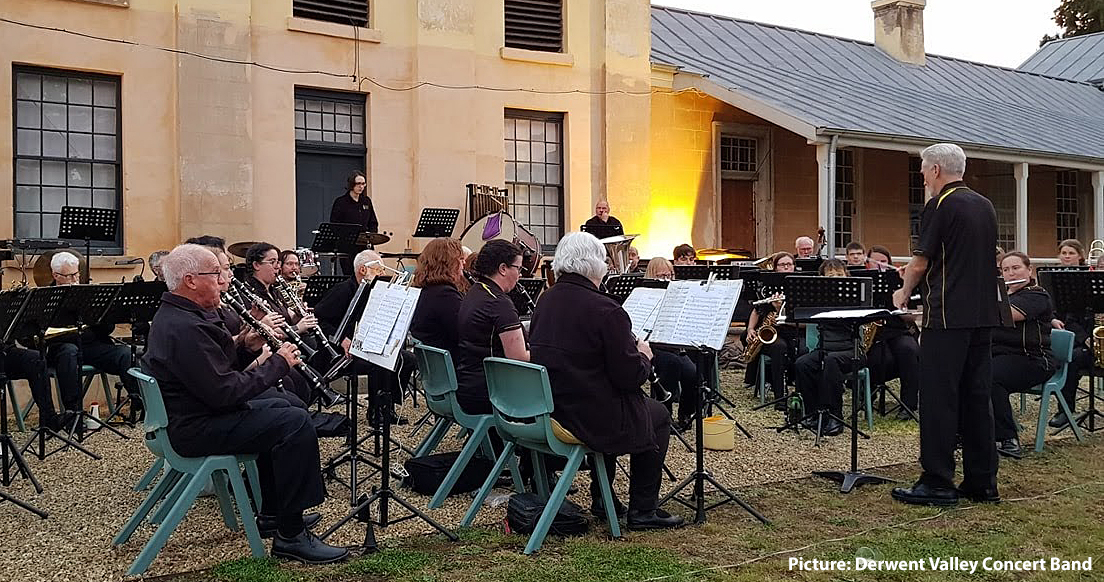 See our band at Willow Court this Friday evening

A PERFORMANCE by the Derwent Valley Concert Band will be one of the feature events of the opening of the 10 Days on the Island Intimate Epics program of arts experiences opening this Friday at the Willow Court historic site in New Norfolk.

The band will perform for about 30 minutes from 6.30pm, with visitors invited to relax on the lawn in front of the 1827 Barracks building, to hear a specially-curated program by one of Australia’s most highly-acclaimed, travelled and successful community bands.

Derwent Valley Concert Band chief conductor Lyall McDermott said the free concert, featuring soprano Madeleine Dyer, would feature music associated with epic tales of love, loss, honour, beauty, magic. “The tragic tale of Romeo and Juliet opens the concert,” Mr McDermott said. “The first piece is the testosterone-filled Dance of the Knights, from Prokofiev’s wonderful ballet based on that story and includes the moment when the lovers first meet.

“Music from an Australian ballet, The Wild Swans is next. This is a medieval story complete with shape-shifting (11 brothers turned into wild swans) and a wicked stepmother. Fabulous young Tasmanian soprano, Madeleine Dyer, sings with the band the role of Eliza, the young sister who returns her brothers to human form through her love and sacrifice.”

Dyer will also perform Scenes that are Brightest, a 19th century song with a direct connection with New Norfolk and the Bush Inn Hotel in particular. “Irish virtuoso pianist and composer William Wallace stayed at the Bush Inn during a visit in 1835,” Mr McDermott said. “He was so captivated by the view from his window that he was compelled to compose a melody (Scenes that are Brightest) which became the central aria of his most famous work, the opera Maritana.”

Also on the program is a four-movement suite based on Irish author Jonathon Swift’s famous novel, Gulliver’s Travels. Each movement depicts the inhabitants one of the countries he visited: Lilliput (land of the midgets); Brobdingnag (the land of the giants), Laputo, (the floating island}, and the Houyhnms (land of the horses).

“There is the much-loved Ave Maria by Guido Caccini – now there’s a tale … Italian? Russian? 16th Century? 20th Century? … in the end, it doesn’t seem to matter much because it is just such a beautiful melody,” McDermott said.

“Music inspired by J.R.R. Tolkien’s epic trilogy Lord of the Rings will close the concert. Symphony No. 1 by the contemporary Dutch composer, Johan de Meij, opens with a musical portrait of the great wizard Gandalf – tricks, fireworks, wisdom, nobility… and a very fast horse!”

There will also be a performance by the Derwent Valley Concert Band’s brass quintet earlier on Friday evening, from about 5pm. Click here for details of the full Intimate Epics program.