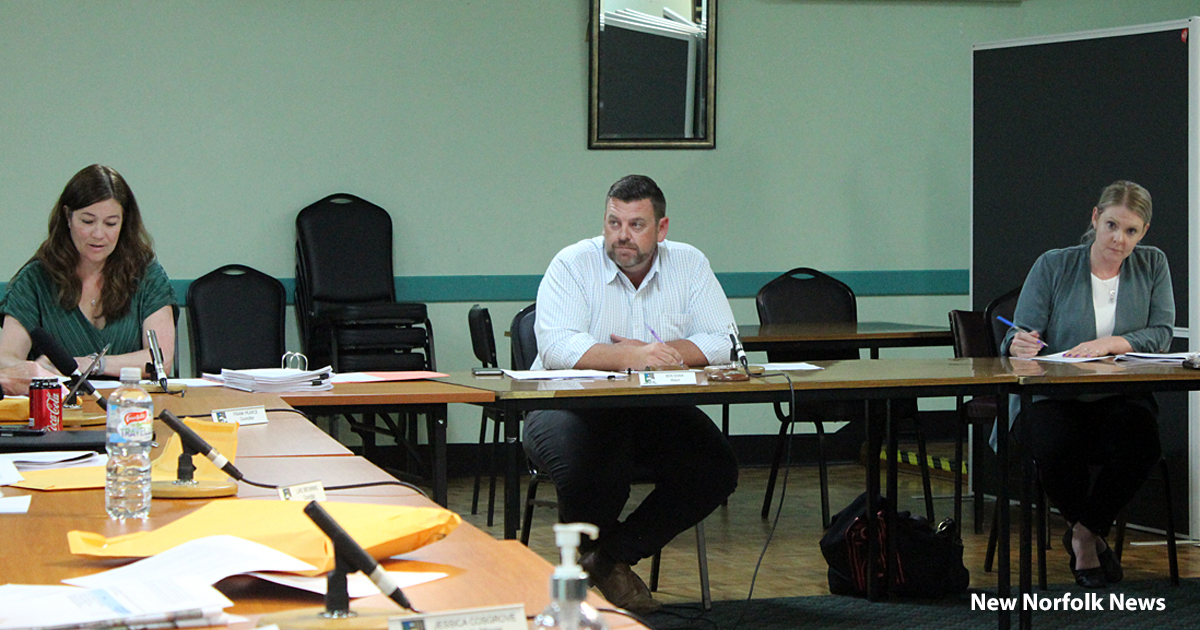 LAST night’s special meeting of the Derwent Valley Council spent longer discussing a plan to nominate mayor Ben Shaw to be president of the Local Government Association than it did to approve a subdivision, two planning scheme amendments and a development application.

The meeting opened shortly after 5.30, with one member of the public in the gallery. Two others arrived 20 minutes later, after the meeting had ended. Mayor Shaw announced that general manager Dean Griggs was on leave and governance manager Quecha Horning was deputising for him. Cr Shaw did not explain why none of the three top-level managers in the room were standing in as general manager. All councillors were present except for Cr Belcher who had previously declared a conflict of interest with all the items on the special agenda.

The first item up for discussion was a draft planning scheme amendment to introduce “hospital services” and “education and occasional care” as discretionary uses on the former Royal Derwent Hospital site. Cr Frank Pearce was the only councillor to speak to the motion, noting that it appeared to be no reason to oppose the rezoning application and put it out for public comment. He said approving the rezoning did not necessarily mean future development applications in those categories would be approved. Councillors voted unanimously in favour of the recommendation.

Cr Pearce was also the only councillor to speak to the second item, which was to approve the council’s own application to subdivide land it owns at Willow Court into three lots and a road connecting with The Avenue. Lot 1 is the Bronte Building leased to the Agrarian Kitchen; Lot 2 is the Alonnah Building leased to the New Norfolk Distillery; and Lot 3 is the Willow Court Barracks and C Ward and yard, part of which is leased to the Salamanca Arts Centre and part to the Agrarian Kitchen. Councillors voted unanimously in favour of the recommendation.

The third item was a planning scheme amendment to allow the council to sell land it owns in Link Rd, Warner Ave and Turriff Lodge Drive at New Norfolk, and Back River Rd, Magra. Cr Pearce said the purpose of the report was to consider public representations received. He said this was part of an ongoing process and should be allowed to continue. No other councillors spoke and the matter was unanimously approved in about 45 seconds.

Cr Shaw had to call twice for a councillor to move the next agenda item, dealing with tree removal and car park construction at Willow Court. Cr Triffett obliged, and then told the meeting how she had agonised over this item. “There’s certainly a lot of good ideas and passion out there, there certainly was for this DA, anyway, and I agonised over this DA, I gave it a lot of thought. But anyway, we are acting as a planning authority and the planning scheme is not about ‘but, if, maybe, or the nice to haves’. We need to consider all reports from the authors and the authorities and the qualified advice. And it doesn’t matter how the vote goes tonight – some people will be disappointed,” Cr Triffett said.

Cr Pearce said councillors were aware of concerns about the concerns about the proposed Frescati House car park, but that was an issue for the council to address as a council, not a planning authority. The role of the planning authority was to assess applications based on planning law. He said he would normally support the application and the recommendation to approve it, because it had been out for public consultation and submissions had been received and considered. “On this occasion the process has been confused by a submission by a council special committee, which in effect is the council opposing its own application. This complicates the process of analysing the submissions, and as far as I’m aware, could complicate any future appeals process as well.” Cr Pearce said he was aware of an imperative to quickly spend the grant funding allocated to this project, but that was not a planning matter. “I will be voting against this recommendation in anticipation of a new planning application process that will enable individuals to put in submissions as distinct from council committees.”

There were no other speakers after these brief remarks by councillors Triffett and Pearce, and the recommendation to build two new car parks including one on the Frescati lawn, was approved by a majority of councillors. Crs Shaw, Cosgrove, Evans, Triffett and Browning supported the recommendation and Crs Pearce and Woods opposed it. The discussion had lasted 3 1/2 minutes.

Councillors then had their longest discussion of the meeting, revolving around their nomination for the position of president of the Local Government Association and a member of the LGAT general management committee. Cr Martyn Evans said the person he intended to nominate was also running for another seat and as such he thought the council should have a second nominee in case “the person” was elected elsewhere. Cr Pearce agreed that it was a good idea to have a “Plan B” and he was interested himself in the committee role.

Cr Shaw was the next to speak. “For me, the next progression, as I’m vice president at the moment and I think that’s why Cr Evans has suggested to put me up for president, and generally they come from the mayors’ pool. I have considered it but obviously I am in another election. But elections obviously aren’t a foregone conclusion, so to have the vote and confidence of my colleagues councillors here, that would be happy for me to take on the presidency role if I am not successful in the Derwent election, I would like to have that option, so I would appreciate the nomination,” he said. Cr Shaw said he did not mind Cr Pearce being nominated for the general management committee. “I figure that I would probably just run for president anyway. I’ve been the delegate, and I’ve been the vice president, so that role that I would like to do moving forward, if it is available, and I’m nominated for, is the president’s role. So I’d be more than happy for you to be dominated as the member if that’s the way the councillors wish to go. I haven’t made my mind up either, so this isn’t actually formally putting me in, I have still got to nominate myself if I want to do it. Obviously the timing isn’t great, because I’m in another election, but this is the only chance that you guys have to put me forward if that’s what you want to do, so I appreciate that.”

Cr Woods sought clarification on the nomination deadlines and how the replacement candidate would come into play. “I don’t know, I think, I’m not sure,” Cr Shaw said. Cr Pearce suggested that there might have to be another LGAT election if the successful candidate for president became unavailable, and Cr Shaw agreed. Cr Evans then moved that Cr Shaw be nominated for president and Cr Pearce for committee member. This was seconded by Cr Woods. Cr Evans said Cr Shaw had done a good job as LGAT vice president and would be a good representative for councils as president. “You’ve done your time there and you’ve done well, and represented us also in Canberra, putting your best foot forward. Cr Pearce has been active in local government, be it as general manager or councillor, over a long period of time,” Cr Evans said. When put to the vote, the nominations were endorsed unanimously.

The final item for discussion during the open section of the meeting was a recommendation to note and release for public consultation a master plan for the New Norfolk Community and Sports Precinct. Moving the motion, Cr Triffett said the Boyer Oval Management Committee was excited. “It took a long time to persuade them that they needed a master plan. Yeah, so I know that Kensington Park is on the table, but that’s a way off. As I’ve said before, I don’t want to see our kids not reaching their potential if they haven’t got the facilities to use. I’d really love to see this get up tonight,” she said.

Cr Shaw thanked Cr Triffett for her remarks and commented that the master plan was being proposed for release for public consultation. Cr Pearce agreed with Cr Shaw and said anyone interested would be able to submit comments. Cr Woods said she would really like to see the master plan go out for public comment. Cr Shaw said he had recently had discussions with sporting groups which had been left out of the development of the master plan and would definitely be submitting comments. “They are a little disappointed, because they are the people that use it, now they’ve got the chance to have some input,” he said. The master plan was unanimously approved for release for public consultation.

Councillors then moved into a closed meeting to discuss the minutes of the audit panel, a closed senior management report, and a request for a leave of absence. It later emerged that leave had been granted to Cr Shaw for the remainder of the Legislative Council election period, with Cr Cosgrove to serve as acting mayor until May 3.