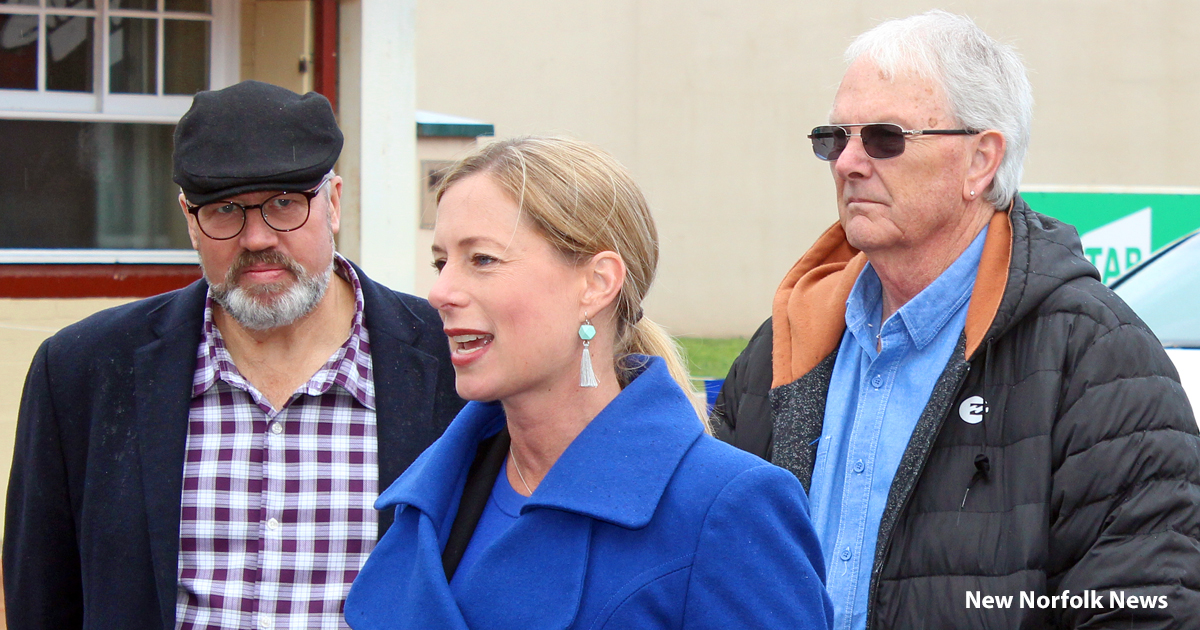 “Here in New Norfolk, there is a hospital that is very well established and loved by the community,” Ms White said. “But right now, if somebody has a cut that needs stitching, they have to go to the hospital in Hobart. Our plan would see that provision of services available here in the local community, which would take pressure off the emergency department at the Royal Hobart Hospital and also make sure people can access health care when and where they need it and take pressure off our ambulance service, which we know is under extraordinary strain.”

Ms White said Labor’s policy was to invest in services and staff to deliver health care where people live, so they don’t have to travel into city centres or call an ambulance. She commended New Norfolk’s Bill Dermody for his advocacy for nurse practitioners to be employed. “It’s because of his advocacy and the work of many others just like him across the state, that we’ve been able to consult and develop a policy like this that will see improvement in services for all Tasmanians.”

Labor health spokesperson Bastian Seidel said the policy was a “game changer” for rural communities. “We have 158 beds in Tasmania’s small rural hospitals and they are beds we haven’t used effectively – the bed occupancy rates are often only 40 per cent – because this government is refusing to employ appropriate staff to look after patients in those small rural hospitals,” Dr Seidel said.

Dr Seidel said a Labor government would fund an extra five full-time nurse practitioner positions at each rural hospital. “Nurse practitioners can be the first port of call for patients who want to be seen because they have a small laceration, for parents who are worried because their child has a fever in the middle of the night, they shouldn’t be forced to drive from New Norfolk to Hobart just to be seen and to be examined. Health care needs to be delivered where people are. It’s health care in the community, for the community.”

Dr Seidel said Labor’s commitment extended to an immediate allocation of $3.5 million for each rural hospital for any capital works required. “This is going to a game-changer because currently those small hospitals have to go through five hoops just to pay for a bucket of paint,” he said.

Mr Dermody said he had spent the last three years providing evidence of how the introduction of nurse practitioners in regional areas around the states had improved health services for those regional areas and taken pressure off emergency departments in major centres. “I want to thank Labor for investigating this and coming out in support of what would be dramatic improvements to health services for people in the Derwent Valley and Central Highlands communities, and would definitely reduce pressure on the Royal Hobart Hospital and on ambulance ramping,” Mr Dermody said.

“May I say that I am very disappointed that I have not had any response to the information I provided to the Liberal Party as well as Labor – no attempt by anyone from the Liberal Party to meet with me or the community to discuss the health crisis in the Derwent Valley and Central Highlands,” Mr Dermody said.

The Liberal Party’s election pledges in health have included a $60 million redevelopment of the North-West Regional Hospital; $20 million for the Mersey Community Hospital; Stage 2 of the Royal Hobart Hospital redevelopment; and funds to reduce elective surgery waiting lists.