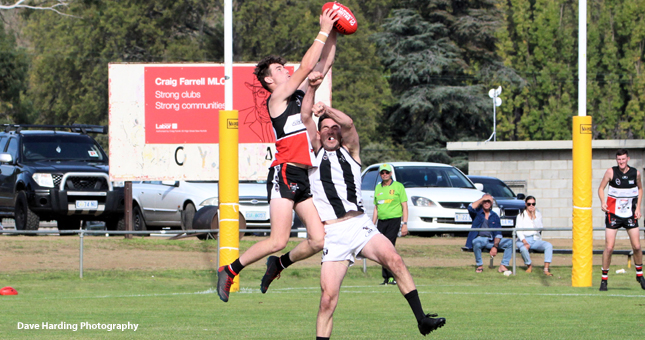 Senior Report by Wayne Walker
A NEW-LOOK New Norfolk senior outfit steamrolled a struggling Claremont Magpie unit in the opening round of the SFL 2021 season on a hot Good Friday afternoon on the big Boyer oval. The Magpies simply had no answers to the Eagles, who had clear winners all over the ground to run out massive 260-point winners.

The Eagles showcased nine new recruits in the season opener, with none better than returning former coach Caden Wilson, who bagged eight goals for the game and set up many others in an impressive display across half-forward. Talented young gun Jye Bearman was dangerous all day, also kicking eight majors with his fast run-on style of play providing plenty of headaches for the Magpie backline.

The home side was quick to convert in the first term, with big Eagle ruckman Ashley Burgess dominating at the centre bounces and giving his on-ball unit of Jake Bearman, Josh Hills, and Jamie Sokolski first use of the footy, which resulted in early goals to enable an 18-point lead.

Another new face to the club, Tyler Ford, was busy across half-forward taking some high marks and booting two early goals. Big Wade Burgess at full forward was providing a key target as the Eagles posted nine goals for the quarter to jump out to 62-point lead at quarter-time while keeping the Magpies scoreless (9.8.62 to 0.0.0).

The Eagles continued to run rampant in the second term, adding another nine goals to the scoreboard, although they did have a minor setback with ruckman Ash Burgess leaving the ground with a thumb injury. The coaching panel moved the ever-reliable Ben Lovell to take the reins in the ruck for the remainder of the game. Josh Farrow was almost impassable across half back turning back many Claremont forward entries. The half-time score was 18.15 (123) to 0.0 (0)

Eagle coach Josh Clifford was not happy with the opening 10 minutes of the third term in his address to the players at three-quarter time. Another new face in ex-Claremont follower/forward Jack Crossin jump-started the Eagles back into gear with some strong marking across half-forward. He showed that he will be a key acquisition for the Eagles by bagging five goals for the game. The home side piled on 21 goals in the second half, with nine in the third term and 12 in the last quarter, in a day that the Claremont Magpies would rather forget.

Young Eagles Tyron Bailey, Brock Triffett and Jack Stevenson all performed well and all three have had strong pres-easons. We all remember young Brock Triffett from our Colts side. He looks bigger and fitter and worked well with more experienced midfielders Jake Bearman, Josh Hills, and Jamie Sokolski. Rowan Thomason is also developing into a versatile solid performer for the club.

The Magpies look like they will be in for a tough year ahead and lack key positional targets. They were well served by Reegan Alforte and Mathew Siely over four quarters. There is an air of excitement looking ahead for the New Norfolk District Football Club. There are plenty of new faces at senior level and depth of talent in our Reserves side with the likes of Nathan and Tyson Eiszele, Cody Morgan, Torne Tangata, Rohan Heron and many others who will be pushing for a Senior spot which looks promising for the club.

The Eagles were not far away from the top two sides last season and look to be a taller side this season, which should enable them to match up much better for the challenge ahead. 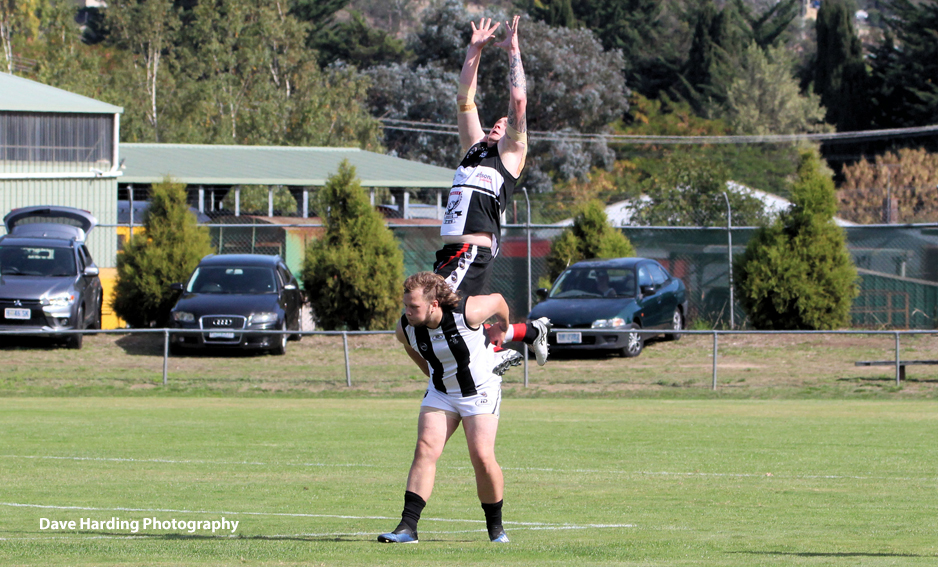 Reserves Report by Wayne Walker
THE Reserves opener also resulted in a huge win for the Eagles. It rained goals for four quarters, which resulted in a massive 217-point thumping for the Claremont Magpies who were kept scoreless for the entire game. Reserves coach Bryan Chaplin was unstoppable at full forward, using his surprising breakaway speed on the lead on the open spaces of the Boyer oval to boot 10 goals.

Michael Murray controlled the centre bounces and ruck duels around the ground giving the Eagle onballers first use of the footy for most of the game. The home side was far more experienced than their opponents, with many senior players from last year in the line-up, to start the season.

Cody Morgan was dominant throughout the game with five goals. Torne Tangata had plenty of possessions and continues to put his body on the line for the contested ball. Rohan Heron bagged five goals as he enters another season of a great career. Nathan and Tyson Eiszele were busy for four quarters along with young Will Banks who was creative on the wing.

On a sad note, one of New Norfolk’s favorite sons Brett “’the freak” Booth made his return to the club for season 2021 only to go down early in the first quarter with a serious knee injury which will more than likely end his season. We wish Brett all the best in his recovery and hope to see him around the club this season. 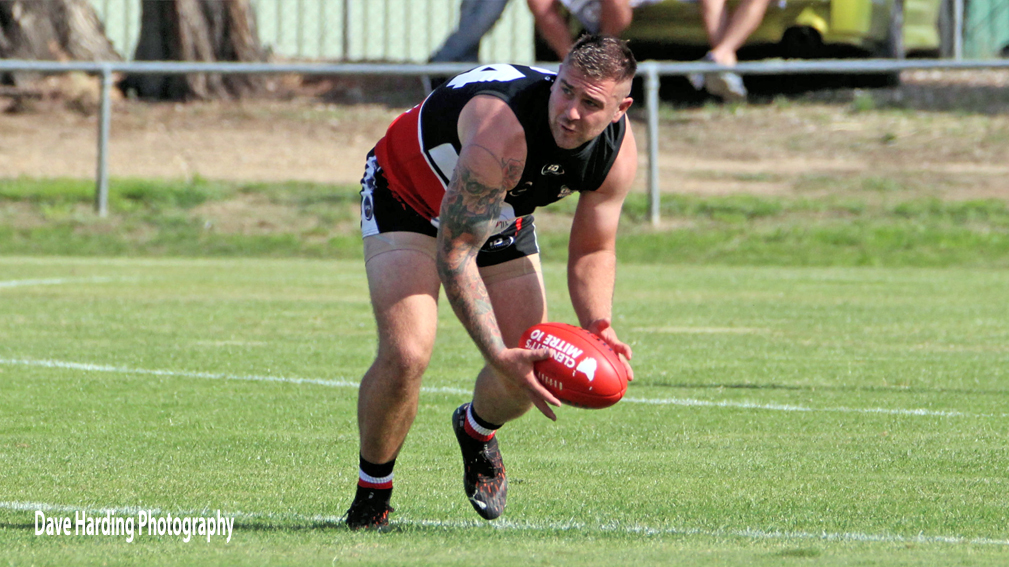 Jack Crossin in action in the senior game.

Colts Report by Anthony Bean
WELL, here we are, the 2021 football season is upon us. On Good Friday, the Eagle Colts were at home to Sorell in very warm conditions. The boys were a little slow to start as they have had little training together to get used to the style of play that coach Paul Clark would like.

After an even first term, Sorell held a slender lead at quarter time. After quarter time, the boys settled and began to gain momentum, using the ball well by hand and foot. They began to look for each other and started to take control of the game and never looked back to run out convincing winners by 45 points.

It was good to see Sorell field a Colts team as it was looking bleak for them a week or so ago. To our boys’ credit they improved as the game wore on and with some training runs together will only improve more as the season progresses.

In a great start to the season, all players were outstanding and played well. Bailey Wheeler was tremendous in his first game for the club, along with Thomas Lovell, Riley Blackaby, Jordan George, Zane Lester and Jack Miller giving great support.

Women’s Report
THE NNDFC Women’s team will play its first game of the season on May 1.