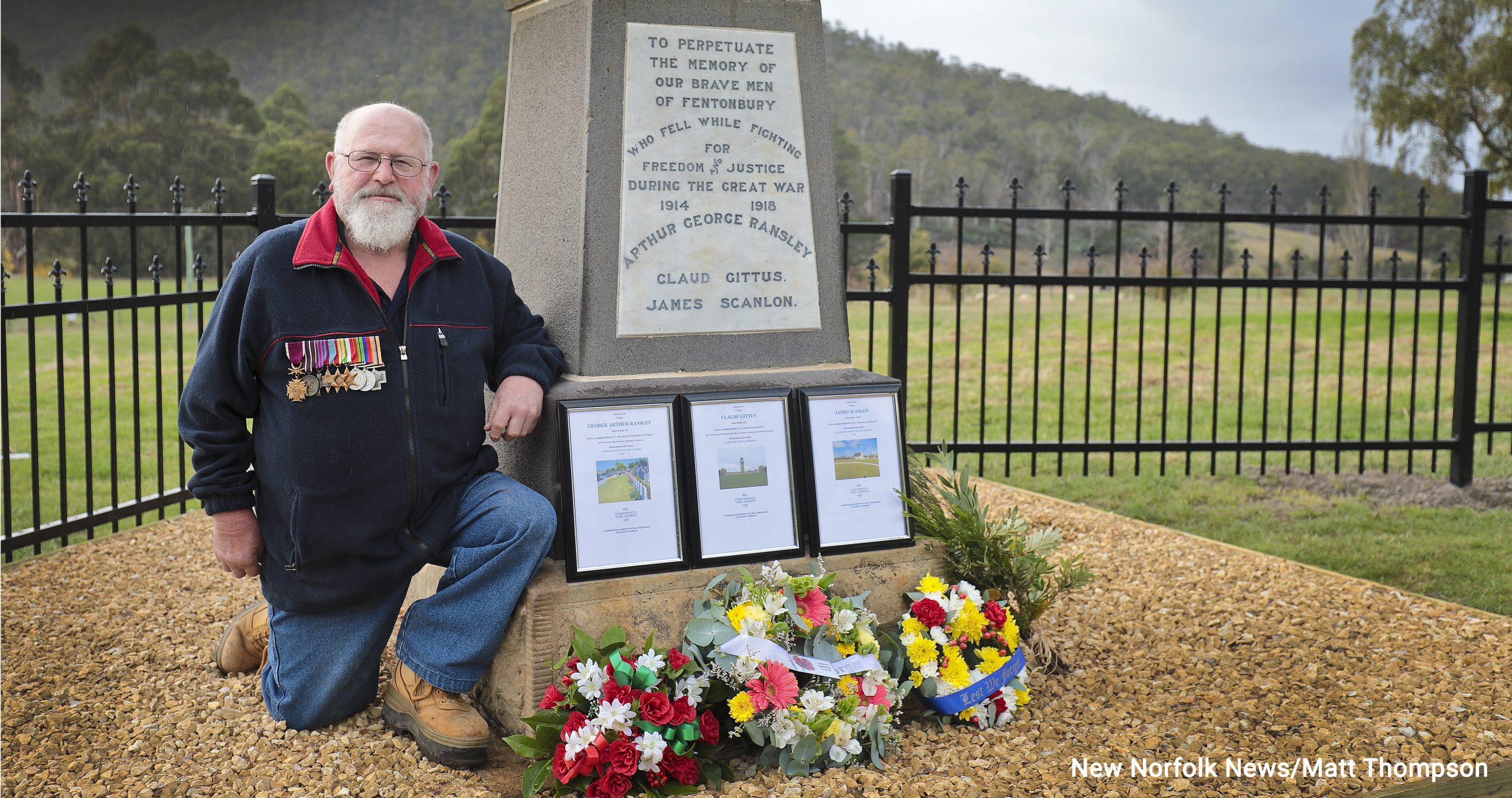 Remembering the fallen of Fentonbury

FENTONBURY doesn’t have much left in the way of town services. The school, post office, petrol station, shop and other facilities are long gone, and the nearest polling place for this month’s election was at Westerway.

What Fentonbury does have is community spirit, civic pride and a sense of its history, and those three things combined to see the town’s World War I memorial restored to its former glory in time for Anzac Day. At dawn on April 25, just over 20 people gathered at the monument to remember the three Fentonbury men who lost their lives in World War I – Arthur Ransley, Claud Gittus and James Scanlon.

Spearheaded by the Westerway Bush Watch group, the restoration has been funded by the Central Highlands Council and supported by neighbouring property owners Jeannie and Neville Lazenby. Central Highlands mayor Loueen Triffitt said it had been a pleasure to be involved with the project, and the community’s appreciation had been gratefully received.

“Eighteen months ago, Bush Watch asked the council to make the memorial accessible and useable, and they did,” spokesman Stefan Frazic said. “At 6am on Anzac Day, the first service in living memory was held at the Fentonbury War Memorial. Twenty two people attended the short but meaningful service, laying three wreaths,” he said.

Temporarily placed on the monument for the Anzac Day service were photos of the final resting places of the three men named on the Fentonbury monument, prepared by a local researcher.

George Arthur Ransley was the son of Arthur and Johanna Ransley, of Fentonbury. A member of the 26th Battalion, Australian Infantry, he died on November 28, 1916, aged 31. He is commemorated at the Porte-de-Paris Cemetery at Cambrai, France.

Claude Gittus was born at Glenora and was the son of Arthur Cecil and Frances Elizabeth Gittus, of Fentonbury. A member of the 12th Battalion, Australian Infantry, he died between May 5 and 8, 1917, and is commemorated at the Villers-Bretonneux Memorial in France.

James Scanlon, the son of James and Mary Ann Scanlon, was born at Fentonbury in 1886. He was one of many Tasmanians who served with the New Zealand Expeditionary Force, and was killed in action in the field in France on May 8, 1917. He was buried at St Quentin Cabaret Military Cemetery in Belgium.