Skip to content
PrevPreviousTeaming up to save lives at Tynwald
NextCWA ladies making news, and lunchNext 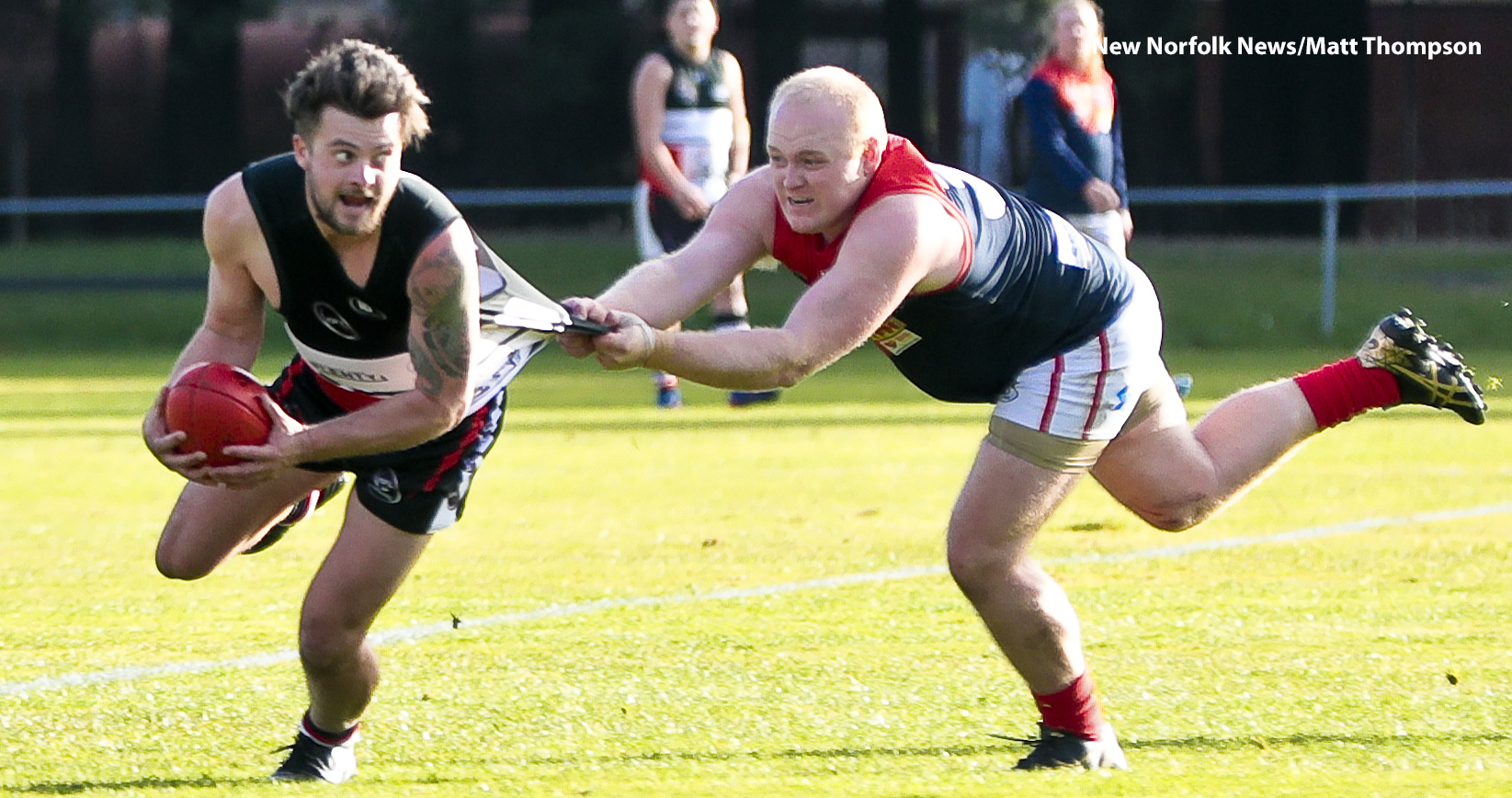 ALL four New Norfolk Eagles teams were at home on the big Boyer Oval last Saturday for a massive four games of local football.

It was an early start for the New Norfolk women in fine but cold conditions for their 9am encounter with OHA. The Eagles took some time to find their feet in the first quarter, but after an even first term they managed to overpower the visitors to run out convincing winners by 20 points and record their second win of the season. It was a great day for the women and they celebrated hard after the game. They now sit in third place on the Division 3 SFLW ladder, although they have a couple of byes coming up.

The Colts were second up and faced a daunting task against an undefeated Southern Storm outfit. The game was of a good standard, but it was clear why the visitors sit undefeated on the top of the ladder. To their credit, the young Eagles fought hard all day and showed that with a little more age and experience they will be a much better combination as time goes on. Unfortunately, due to the quirky roster, the boys play Southern Storm again tomorrow (June 5) on their home turf. It will be another hard day for our boys.

The Reserves went on their winning way with a strong 101-point win over the Brighton Robins. The team is playing some good consistent football and now sit in third spot on the SFL ladder. Finals football looks to be on the radar.

The Senior side also lined up against the Robins, who had only won one game for the season. The game did not reach any great heights, but after a slow start the Eagles eventually won convincingly by 73 points. The Robins are rebuilding after a couple of difficult seasons. While the final margin was significant, the Robins played some good football at stages and showed signs that they on the right path.

SATURDAY: Our men’s teams travel to Cygnet for some tough games against Southern Storm and Cygnet. It is always a difficult road trip so the teams would appreciate strong support from our loyal followers. 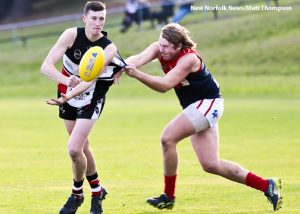 MATCH REPORTS
Senior Report – Wayne Walker: The New Norfolk Eagles grabbed a much needed 73-point win on Saturday over an
enthusiastic Brighton Robins outfit, to record their fourth win for the season. They now hold fifth spot, on percentage, over the Hobart Tigers (sixth), on the SFL ladder. This keeps the Eagles in touch with the ladder leaders in what promises to be an interesting second half of the season ahead.

The Eagles finished strongly in the second half, booting 7 goals, while the Robins could only manage 1 against a tightknit back six lead by Josh Farrow, Rohan Heron and Tim Butterworth. The home side had too many avenues to goal, with key forwards Jack Crossin, Caden Wilson and Tyler Ford taking advantage of the scoring opportunities provided by the great work of Eagle onballers Josh Hills, Jake and Jye Bearman and Jamie Sokolski.

The first term was an even affair on the scoreboard, although the Brighton Robins were moving the footy from defence to their forward line a little better than the Eagles. The Robins failed to make the most of early opportunities provided by Samuel Lewis-Johnson, Joel Millhouse and Jak Chapple, who were busy for the visitors. Big Eagle ruck-man Ashley Burgess returned to the side after being sidelined for several weeks with a broken thumb. He looked to be in good touch at the centre bounces, and around the ground, and came out on top against Robins ruck-man Nicholas Barker. Having Burgess back in the side helps to free up Ben Lovell and Tyron Bailey, who was out with a concussion, which gives the Eagles greater flexibility moving forward. There was only seven points the difference at quarter time with the Eagles leading 3.2.20 to the Robins 2.1.13.

The Eagles began to get the game on their terms in the second quarter, with a Wade Burgess snap from 20 metres out, followed by goals to Crossin and Sokolski. Two goals from young Eagle Brock Triffett, one from a snapshot and another from a spectacular high mark 20-metres out gave the Eagles a 38-point lead. The Robins answered through their captain and key forward Connor Salter to reduce the Eagles lead to 31 points at the half time break. 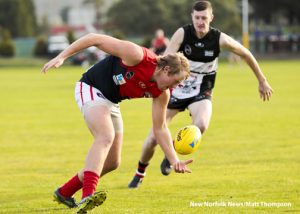 Both sides struggled to get any flow into their game during the third term, but the Eagles added 2.4 to their score-line, while keeping the Robins scoreless. A major highlight of the quarter was a magnificent ground ball pick up by the fast- running Jye Bearman who broke away from the centre bounce and finished off with a spectacular 45 metre kick from centre half forward for an Eagle six pointer. The Eagles went into the three-quarter time break with a 47-point margin (Eagles 10.7.67 to the Robins 3.2.20).

The Eagles took over in the last term with hard running onballer Jamie Sokolski on fire racking up many possessions. Josh Hills snagged 2 goals and forwards Jack Crossin and Tyler Ford also chimed in adding to the home side’s scoreline. The Eagles came away with a comfortable win, keeping the Robins to just 1 goal in the second half.

New Norfolk now faces a tough trip to Cygnet, who had a massive 329-point win over a battling Claremont. The Port are currently sitting on top of the SFL ladder, on percentage, and will certainly be a big challenge for the Eagles. The teams have had some great clashes over the last few years, and even though Port have come out on top on the last few occasions, they have struggled to shake the Eagles off until late in the game. The Eagles should have Tyron Bailey and Rhys Heald available for selection after missing a week through injury and could possibly pick from an inform Reserve squad, which should strengthen the Eagles line up. It all looks set for a great game at the picturesque Cygnet oval this Saturday. Make sure you get a ticket… GO EAGLES! 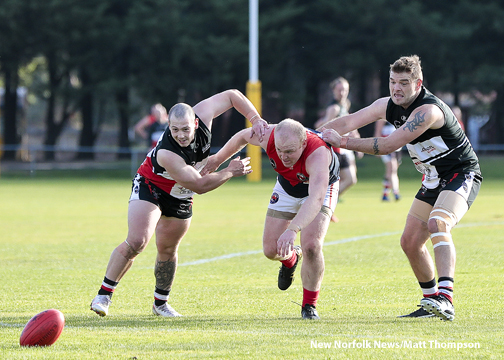 Reserves Report – Wayne Walker: The New Norfolk Reserves continue to perform well and sit one game clear in third position on the ladder, after a convincing 101-point victory over the Brighton Robins. They look to have a great chance of playing finals footy this in season.

The Robins had no answers for veteran Eagle forward Clint Curtin and utility-forward Cory Ransley as they combined for 14 goals (Curtain 9 and Ransley 5), with Curtain kicking multiple goals in every quarter. Eagle veteran Luke Browning stopped everything in his path and turned back many Robins forward entries for a best on ground performance. Returning Eagle Nic Santi has slotted in well and has added some much-needed height. He is a bonus for the club going forward, along with Kyle Hansen and Andrew Minchin.

Another experienced campaigner Jake King has also returned in the last couple of weeks and has also added some extra depth to the squad. Nathan Eiszele returned from injury and played his usual solid game for the home side along with younger brother Tyson, who continues his good form. Full back Brett Hodge is performing well and is shaping to hold down the key full back position. Unfortunately, Eagle onballer Jake Foster left the ground with what looked like a serious ankle injury, which could sideline him for some time.

The Reserves will welcome back the in-form Torne Tangata, who will be available for the upcoming game against Cygnet, after a one-week suspension. The Eagles will go in as favourites against the Port on Saturday and should continue their good form. 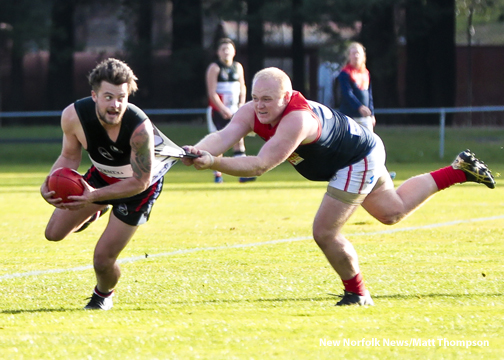 Southern Storm hit the ground running in the third term and piled on another 5 goals 3 behinds while the home side didn’t bother the scoreboard. The visitors held a massive 99-point lead at three quarter time. The final term saw our boys kick their only goal of the match through Brodie Scanlon. The visitors scored another 6 goals and 3 behinds to run out massive 132-point winners.

It is obvious that Southern Storm are the side to beat this season. They are strong all over the ground and deserve to be sitting undefeated on the top of the ladder. While the final score was massive, our boys did not give up and fought hard all day. They managed to display some good passages of football during the match. The side is
a young side and will continue to improve as the season progresses. They will be much stronger next season.

Women’s Report – Chris Lovell: The Eagles women were first up on Saturday in cold, but sunny conditions on the big Boyer Oval against OHA Ships. The game started in front of a good crowd. The first quarter was an even affair with both sides trying to gain the upper hand. Most of the play was between the two 50m arcs and both sides were having trouble getting the ball into their forward lines. The home side managed to hold a slender lead of 2 points at quarter time. The second quarter saw the Eagles increase the pressure and maintain most of the play in their forward half. OHA struggled to get the into their forward line and the strong Eagle defence kept them scoreless for the second term. The home side kicked 1 goal and 2 behinds for the quarter to increase their narrow 2-point lead to 9 points at half time.

The third quarter was a repeat of the second, with the Eagles continuing to pressure the OHA back-line. Unfortunately, the home side could only manage 3 points. The Eagle back-line was still well on top of the OHA forward line, restricting them to only one point for the quarter. The home side led by 12 points at three quarter time. In a strong final term, the Eagles maintained the pressure on the OHA backline and kicked another 1 goal and 2 behinds with the strong Eagle defence holding the visitors scoreless. The final scores saw an inaccurate home side win by 20 points and chalk up their second win of the season.