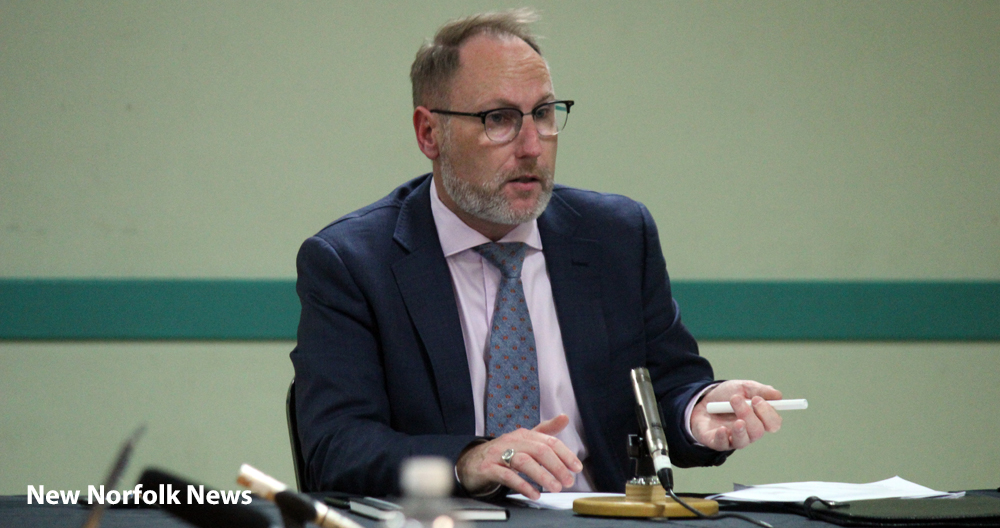 Ms Graham’s departure follows those of the executive infrastructure manager, chief finance officer, economic development officer and the property officer. A health and compliance manager is understood to have resigned twice. General manager Dean Griggs (pictured, above) said Ms Graham was a loss to the council but he congratulated her on her new role. He then introduced Daniel Marr, the council’s new executive manager for development.

Mr Griggs took on notice three public questions received in writing. Phil Bingley had asked whether a review of the council’s financial hardship policy would include full public consultation. Colin Hutchinson had asked what would happen to murals on the Arthur Square toilets when the building is demolished, and who were the volunteers featured on the wall at Lee’s Corner, in High St, New Norfolk.

From the floor, James Graham asked for the meaning of “supplementary rates” and asked how the cost of $100,000 attributed to subdividing council land at Willow Court had become a “variance.” Mr Griggs said supplementary rates was income that became available during the year as new properties were completed. Senior finance officer Allison Wilton said a supplementary rates notice may also be issued if there is a change in the value of a property.

Answering Mr Graham’s second question, infrastructure executive manager Amanda McCall said the $100,000 was an anticipated cost of the Willow Court subdivision. “Due to the delay this year in getting that subdivision work happening, that will actually be rolled forward.” Mr Graham also asked whether the council had taken up the proposed $1.5 million loan to fund a new information technology and rating system. Mr Griggs said the business system loan had not yet been taken up but was expected to “hit the balance sheet” before the end of the financial year. Some would be spent this year and the remainder carried over.

A notice of motion from Cr Shaw proposing “that both sides of council-owned roads in townships eventually have fully sealed and concrete paths,” lapsed due to his absence from the meeting.

Construction of 14 dwellings at 30 McLeod St, New Norfolk, was approved unanimously. Cr Martyn Evans said there had been no objections to the development and it should have been able to be dealt with by staff acting under delegated authority, but for a ruling that required developments worth more than $1m to be decided by councillors. Cr Julie Triffett said she loved the development but she had not noticed any car parking provision for disabled people. She did not then move for any to be included.

Councillors approved a 2% increase in dog registration fees. Last year’s fee increase was waived as part of the council’s COVID-19 support package but owners were still required to register their dogs. Some 2830 dogs were registered in the municipality and 38 dogs were impounded during the financial year.

Distribution of $13,636 in community grants was unanimously approved. Cr Triffett said the committee had reached some good outcomes, although some applicants would be disappointed because they did not meet the conditions required for a grant. More than $6000 was left in the kitty and there was no explanation as to why two applicants were awarded twice the amount they asked for.

Summaries of the operations of the council-owned swimming pools at New Norfolk and Bushy Park were tabled for the first time, along with a recommendation to start the process of recruiting managers for the pools. After a question from Cr Frank Pearce it was announced that the operator of the New Norfolk pool had opted not to take up an extension to the contract.

Cr Paul Belcher raised a constituent’s issue about the difficulty experienced in trying to meet the council planning officer. Mr Griggs said the council was working pretty hard on the customer experience for planning. “One thing that COVID-19 has taught us is that the community can deal with making appointments to come and see us,” Mr Griggs said.

In councillors’ question time, Cr Belcher asked when the council’s arrangement to accept waste from Brighton Council was to end. Mr Griggs said the 2+2+2 contract concluded at the end of this financial year.

Cr Evans asked what arrangements were in place for the end of the Brighton waste contract. Mr Griggs said discussions were under way and councillors would be briefed soon.