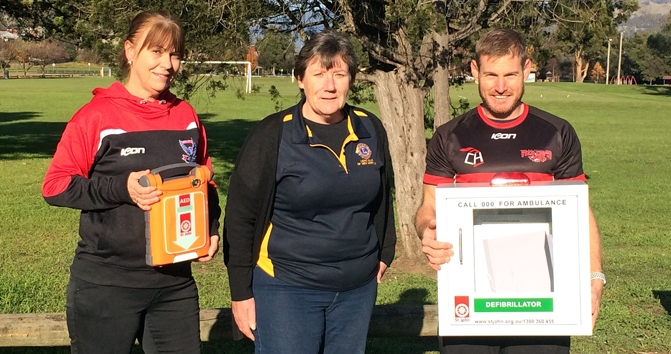 Teaming up to save lives at Tynwald

The NNJFC, NNCC seniors and juniors, and the New Norfolk Soccer Club use the grounds at Tynwald and bring great numbers of spectators all year round. Community events held in the park will also benefit from the defibrillator being available. Mrs Kievit said the Lions Club was pleased to have been part of the project. “It is a good example of collaboration between community groups. When we work together, we can achieve so much more than working on our own.”

Ms Burns was the driving force behind a collaboration between that club, the New Norfolk Cricket Club and the Lions Club of New Norfolk to make a defibrillator available for the many groups who use Tynwald Park. “When I completed a first aid course recently, I came away thinking that we really need to have a defibrillator. We hope we never have to use it, but it’s there if we do, and will improve our chances to save lives,” she said.

Mr Hill said it was great to have a defibrillator at Tynwald Park. “We learned recently that over 100,000 cars use Tynwald each year. With the new change rooms that number will probably increase,” he said.