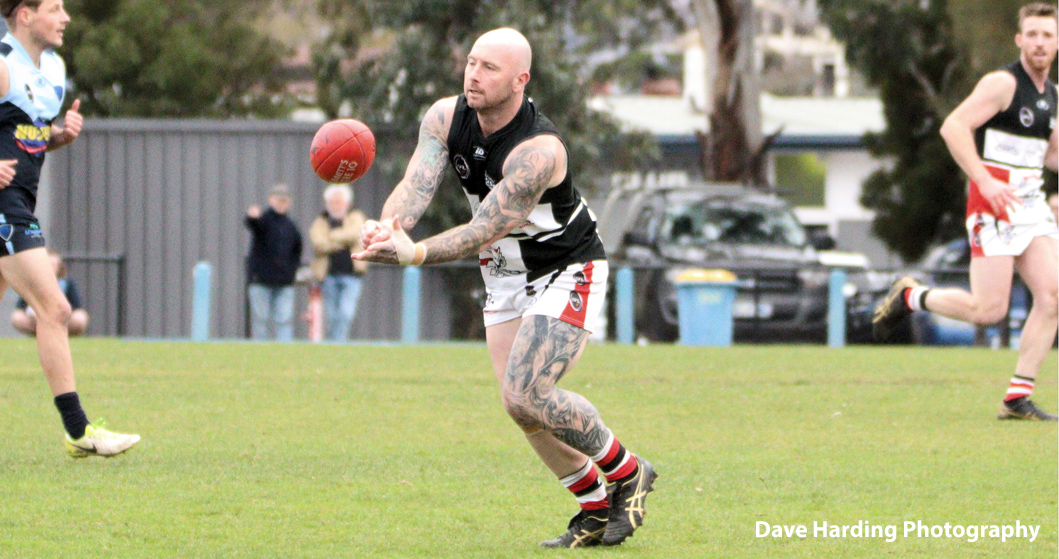 IT was a disappointing weekend for all four New Norfolk football teams with losses across the board. All teams were on the road with the women playing Claremont White at Abbotsfield Park last Friday night and the three men’s teams playing Lindisfarne at Anzac Park on Saturday.

After the disappointment of last weekend, all men’s teams are on the road again this Saturday for danger games against Sorell at Pembroke Park, while the women have a bye.

MATCH REPORTS
Senior Report – Wayne Walker
The Lindisfarne Two Blues dominated the second half last Saturday, booting 15 goals to the Eagles’ 5. They stamped themselves as a serious contender for the SFL 2021 flag as they ran out 84-point winners in a convincing display at Anzac Park. The Two Blues continued to run and carry, and used the footy more effectively than the Eagles in the third and fourth quarters. They were capably led by their captain Jack Gleeson, as well as Teege Westbury, Sheldon Smith and Alex Gaul who were finding their key forward targets in Michael Cassidy, Samuel Adams and Jake Briggs who all kicked four goals along with Michael Blackburn with three.

The Two Blues started the game with an early goal from playing coach Cassidy, but the Eagles hit back with a quick snap from Josh Clifford followed by another from Blair Wardlaw and two goals to the strong-marking Jack Crossin. However, the Eagles missed early opportunities in front of goal, including two posters, due to a strong cross breeze pushing the footy across the face of goal. The Eagles jumped out to a 19-point lead, but the Two Blues bounced back with some penetrating kicks into their forward 50 against the breeze and answered with Gleeson and full-forward Blackburn kicking truly. Early key matchups saw veteran Rohan Heron on Cassidy. Jacob Daley picked up Samuel Adams, and Jordan Banks-Smith lined up on the dangerous Blackburn. Talented young gun Will Banks ran with Two Blues’ Theodore Jaynes and Zac Mastracola was on Eagle forward Jack Crossin.  Quarter-time scores were Eagles 4.6 to the Two Blues 4.1.

Wild weather intervened in the second term with strong winds and heavy rain sweeping across the ground, favouring the clubroom end to which the Two Blues were kicking. Big Eagle Ashley Burgess was tangling with Luke Polanowski in the ruck contests, Jacob Wigg, Josh Hills, Jye Bearman and Jamie Sokolski were pitted against Jack Gleeson, Josh Young, Tom Roberts and Teege Westbury. The Two Blues lifted their work-rate and channeled the football into the centre corridor, while the Eagles struggled to enter their forward fifty with limited opportunities during the quarter. At this stage of the game Eagle Jordan Banks-Smith was well on top of Blackburn while Rohan Heron had the better of Cassidy. Hard working forward Jake Briggs was causing problems for the Eagles booting 3 majors for the term as the Two Blues went out to a 19-point lead at the main break. Half time scores (Lindisfarne 8.8.56 to New Norfolk 5.7.37)

Conditions improved in the third term as the Two Blues put their foot down taking control of the game and slamming on six majors. Adams booted two goals along with Dane Bailey and Theodore Jaynes with a goal each. The Eagles could only manage one goal through Tyler Ford. The New Norfolk backline was under extreme pressure as the Two Blues jumped out to a match-winning 52-point lead after having numerous entries into their forward line. The Eagles were missing key back-man Josh Farrow through injury and the very handy Rhys Heald (unavailable). Heald was replaced by the evergreen Luke Browning forcing the Eagle coaching panel to reshuffle their back six. This had a major impact on the side’s overall structure.  Three-quarter time scores were Lindisfarne 14.12 to New Norfolk 6.8.

Unfortunately, things got worse for the visitors in the last term as the floodgates opened. The Two Blues were well on top and were continuing to go forward creating more opportunities for their big forwards in Cassidy, Briggs, and Blackburn. They added nine goals for the quarter while the Eagles added four goals with two to the busy Josh Hills as the Two Blues ran away with an impressive 84-point victory.

There was dead silence in the Eagle dressing room after the game. Playing coach Josh Clifford asked his charges “what went wrong” as the Eagle playing group looked shattered after a heavy loss. Clifford praised his younger players who performed well throughout the afternoon. For the Eagles no one tried harder than Will Banks who had a great duel with Theodore Jaynes. Jack Hills played his best game for the season along with Brock Triffett who continues to show he has what it takes at senior level. Backmen Jordan Banks-Smith and Rohan Heron could hold their heads high under trying circumstances and the very consistent Jamie Sokolski worked hard all day for the Eagles.

The Eagles are still hanging on to fifth spot on the SFL ladder and will travel South to take on the improving Sorell on their home turf at Pembroke Park on Saturday. They will need to have a form reversal to gain some confidence for the weeks ahead if they are to take part in this year’s finals series.

Reserves Report – Wayne Walker
The Eagle Reserves also had a tough afternoon losing by 69 points against the Lindisfarne Two Blues, who currently sit on top of the table. It was a disappointing day for the Eagles as they were hit with players coming off through injury during the game, along with players missing from the normal line up.  On the injured list were Corey Ransley (hamstring), Cody Morgan (ankle) while Clint Curtain and Nic Santi were unavailable. Luke Browning was a late withdrawal as he was called up for the Seniors.

The Eagles held their own in a tight first quarter. The Two Blues booted two goals for the term while the Eagles kicked one through Torne Tangata from a 30-metre pass across the body from Andrew Minchin. This was their only major for the game. The second term was the determining factor for the match as the Two Blues added six goals while keeping the Eagles scoreless for the entire quarter to go out to a 46-point lead at the main break (Two Blues 8.6 to the Eagles 1.2). Two Blues forward Oliver Rand booted three goals and proved a handful for the Eagle backline with his strong marking. The busy Jacob Kent was also sharking the footy close to goal and kicked three goals. To the Eagles’ credit they held the Two Blues to just four goals after half time but had no clear winners up forward.

Eagle onballer Jordan Eiszele played a great game until he left the field with an ankle injury. Jack Taylor-Evans is working into good form with another solid hit out. Andrew Minchin was also one of the Eagles’ best. Mathew Jones battled hard all day along with Jake Foster and Tyler Heron. A special mention to young Caden Donaghy who performed well as a late replacement for Luke Browning.  The Reserves suffered some ankle injuries during the game which also had a major impact on the result. They must try to bounce back next week against Sorell to stay in the top end of the SFL ladder.

Colts Report – Chris Lovell
The New Norfolk Colts were on the road to Anzac Park last Saturday, facing a difficult task against the fourth-placed Lindisfarne Two Blues under lights. The young Eagles were looking to improve on a 91- point loss to the Two Blues the last time they met at Boyer Oval. The game started in wet conditions following a severe downpour in the Senior game.

The first quarter saw the home side bounce out of the gates quickly and produce some good football to pepper the scoreboard. The young Eagles were struggling as the home side piled on six goals and two behinds. Although they were under pressure, they managed to score two goals and a behind to trail by 25 points at the first break. The Two Blues continued to impress in the second term. They again outplayed the visitors to score three goals and four behinds. The Eagles could only score one behind for the quarter. By half-time the Two Blues had set up a match-winning lead of 46 points and it was looking like another big loss was on the cards for the Eagles.

After some words of encouragement from coach Paul Clark at half time, the Eagles came out full of running and improved their play significantly in the third term. They stepped up their pressure and matched the Two Blues in all facets of the game to score three goals and one behind to three goals and two behinds. The three-quarter time margin was 47 points.

The final quarter saw the stronger Two Blues edge their way clear by scoring two goals and seven behinds to the Eagles’ single goal and point to run out winners by 59 points. To the young Eagles credit, they fought the game out well, particularly after half time. The result was a massive improvement of 32 points on their first encounter with the Two Blues this season.

The Two Blues were too good on the day, but the young Eagles continue to improve as the season progresses. Once again, some under 16 players were rotated through the team and all performed well and will be much better for the experience.

Women’s Report – Chris Lovell
The New Norfolk Women were also on the road and playing under lights, against Claremont White at Abbotsfield Park last Friday night. The Eagles were looking to get back on the winners list after a big loss to Hutchins. The home side began well and immediately put the visitors under pressure kicking three goals and one behind to one point for the quarter to lead by 18 points at the first break.

The Eagles defended strongly in the second term and held Claremont to two goals and one point, but could only manage to score one behind as they trailed by 30 points at half-time. The second half was disappointing for the Eagles as they did not score while the home side added another three goals and four behinds to run out convincing winners by 52 points.

Although there were some key players out through injury, the game was a setback as the Eagles won their previous encounter with Claremont by eight points at Boyer Oval earlier in the season. The women remain in fourth position on the SFL Division 3 ladder. They have a bye this weekend but will need to improve in their next game against OHA if they are to remain in the hunt to play finals this season.