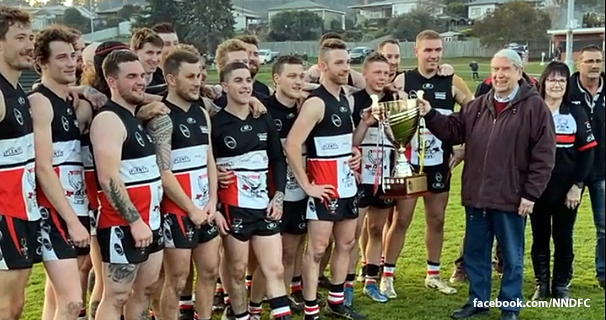 IT was a big day at Boyer Oval on Saturday with all three men’s teams at home to the Hobart Tigers while the women were away at Abbotsfield Park against Claremont White on Sunday.

The Eagle Colts faced a tough assignment against a strong Hobart Tigers outfit, while the Reserves were attempting to reverse a narrow loss to the Hobart Tigers at the TCA in their first encounter earlier this season.
The Seniors were looking to retain the Trevor Leo Cup and leap frog Hobart on the SFL ladder and regain fifth spot on the ladder.

A large crowd was in attendance to watch the match. It was great to see Trevor Leo, a legend of the game, back at Boyer Oval on Saturday. He mingled with the crowd and caught up with many old friends during the day. He addressed both sides prior to the game and was warmly welcomed by the players.

At the end of the day he took great pleasure in presenting the Trevor Leo Cup to New Norfolk and joined with the players in belting out a loud rendition of the club song. It was a pleasure to welcome Trevor to the game on Saturday and I am sure he thoroughly enjoyed his return to Boyer Oval.

All men’s games have been cancelled this weekend (rescheduled to July 31), but the New Norfolk women’s side will travel to New Town for a hard game against St Virgil’s at 10am on Saturday.

Senior Report – Wayne Walker
An impressive Eagles outfit finished strongly in the second half to run out 58-point winners in a hard-fought contest in perfect sunny conditions at Boyer Oval and jump back into 5th position on the SFL ladder. It was a tight contest for three quarters as the Eagles gained a handy 26-point break at three quarter time following on with six last-quarter goals to the Tigers’ one, to run out convincing winners.

The match was for the annual Trevor Leo cup which the Eagles retained for season 2021. Leo, who coached the Eagles to their first TFL premiership in 1968, addressed both sides before and after the game. After the final siren he presented the cup to Eagle captain Jacob Wigg. It must be said that Leo is a true gentleman of the game.

The home side welcomed back captain Wigg for his first game of the season after a long layoff with injury, and he did not miss a beat with a best-on-ground performance for the Eagles. Both sides were missing some key players with Tigers playing coach Alex Gilmour and mobile key defender Sam Reeves unavailable through injury while the Eagles were missing veteran forward Caden Wilson and the versatile Jacob Daley.

The opening term was an even affair with both sides having their fair share of the footy. The Eagles’ first major came through the hard running Jamie Sokolski. The Tigers answered with a six-pointer to Brad Joseph but that was followed by a great snap on a tight angle from Eagle Tyler Ford. The visitors hit back with another goal to Joseph but Eagle playing coach Josh Clifford sharked the ball off a pack and slammed through a goal for the Eagles’ fourth.

The home side was in attack once again with Eagle forward Jack Crossin unable to control a mark but once again the dangerous Clifford grabbed the footy at ground level and speared a pass to Wigg who kicked truly as the Eagles took a 12-point lead at quarter time (5.2 to 3.2).

Clifford was once again instrumental in the opening goal for the Eagles in the second term with a short pass to Brayden Chaplin 25 metres out on a slight angle for another six-pointer. The Tigers were getting great drive from on baller Brock Daniels who was in everything as the Tigers pushed forward and scored through mobile forward Dane Ayliffe at the 14-minute mark. The Eagles answered with a great pass from Wigg to Ash Burgess who took a strong mark in front of goal to give the home side a 13-point lead. The ball was being transferred from both ends of the ground for most of the quarter with neither side making the most of their opportunities with just two goals each for the quarter. Half time scores were New Norfolk 7.4. to Hobart’s 5.3.

The Eagles started the third term in fine style with a magnificent individual effort from Nathan Eiszele outpointing two Hobart opponents across half forward, breaking clear and kicking a great goal from 35m out. The Tigers hit back quickly and reduced the home side’s lead to seven points but moments later two Hobart players collided heavily in a marking contest and that man Wigg once again gathered the ball at ground level and kicked the footy from 40m out, rolling along the ground through the big sticks. The Eagles were also sparked into gear by a great intercept across the half back line from talented Tyler Ford who passed to Crossin who added another major from 45 metres out followed by another from Josh Hills to see the home side go out to a 26-point lead at three quarter time (11.6 to 7.4.).

New Norfolk took control of the game in the last term starting with a bone crunching tackle from Ford on a Tiger opponent as the Eagles took the ball forward finding Burgess who took another strong mark just 10m out, bagging his second goal for the game. The home side could sense a big win as the Eagle midfield unit in Jye Bearman, Hills, Wigg and Sokolski winning the footy in and around the contest as the Eagles piled on six goals due to some great teamwork and hard running. The coaching team pulled off a master stroke in playing Nathan Eiszele deep in the
forward line bagging three majors throughout the game using his size and strength to advantage.

The Tigers were well served by their captain, Joseph. Jack Adams performed well and was busy all day and Brock Daniels was by far the Tigers’ best player over four quarters. The Eagles need to remain on a winning streak to cement a spot in the top five.

Reserves Report – Wayne Walker
New Norfolk saved their best footy until the last quarter, booting four goals to Hobart’s solitary behind in what was a frustrating day for both sides as they struggled for the first three quarters to build a score. The home side came away with a 15-point win in what was a battle of the half-back lines with neither side able to get the game on their terms at any stage until the Eagles lifted their work rate late in the game.

The Tigers were on the attack early in the first term but wasted several forward entries while the Eagle backline led by Luke Browning along with Nathan Ford and Jaiden Fisher-Cooley kept the Tiger forward line to four behinds for the entire first half. Eagle onballer Jack Hills started well gaining many possessions along with Tyson
Eiszele and the in-form Torne Tangata. The Eagles were having the same problem as the Tigers and were unable to hit the scoreboard until young Jack Miller scored the only goal for the first term. Quarter-time were New Norfolk 1.2 to Hobart 0.2.

Eagle ruckman Michael Murray was up against Tiger tall man Mitchell Bird in what was an even contest at the centre bounces and Tiger full back John Baker was on top of New Norfolk key forward Corey Ransley. The second term continued to be a stalemate, with both sides adding two behinds each to the scoreline: New Norfolk 1.4 to Hobart 0.4. The third term belonged to the Tigers as they added three goals while the Eagles were struggling and added only five behinds as the visitors got away to a nine -point lead: Hobart 3.6 to New Norfolk 1.9.

The Eagles went up a gear in the last term with an early goal to Wade Burgess followed by a clever snap from Blair Wardlaw which gave the Eagles a two-point lead. Wardlaw also featured in the next goal for the Eagles as he passed to Jack Miller for his second, followed by another major to the hard-working Tyler Purdon which gave the Eagles a 15-point winning margin. Jack Hills and the pacey Kyle Walker played their best games for the season along with the ever-reliable Luke Browning across half-back. The Eagle Reserves side sit third on the SFL ladder, two games clear of the Tigers and two games behind the Huonville Lions and Lindisfarne.

Colts Report – Chris Lovell
New Norfolk was at home last Saturday to the strong Hobart Tigers who sit second on the ladder. The young Eagles were trying to improve on a 152-point loss to the Tigers at the TCA earlier in the season. The game started in bright, sunny weather with damp conditions underfoot. It was obvious from the first bounce that the home team was in for a tough day but the Eagles stuck to their task and defended strongly to be in touch with the visitors at quarter time. The Tigers scored four goals and two behinds to the Eagles’ single goal to lead by 20 points at the first break.

The second quarter saw the Tigers up the tempo and add three goals and three3 behinds to the home side’s two behinds to hold a strong 39-point lead at the main break. The Eagles were trying hard against a taller, stronger opposition and they played some good football in the third quarter, but inaccurate kicking saw them score four behinds while the Tigers added three goals and two points.

The final quarter saw the young Eagles run out of legs as the Tigers added five goals and three behinds to score a strong 88-point victory. It was a good, consistent four-quarter effort by the visitors and while the margin was
significant, the young Eagles should be proud that they reduced the margin from their previous encounter by 64 points. This shows the improvement the boys have made this season and together with the rotation of under -16 boys through the team augers well for the future. The Eagles showed glimpses of their improvement with some slick passages of football during the game. Coach Paul Clark would be pleased with the improvement shown by the boys and with a little more discipline and experience they will continue to improve as the season progresses.

Women’s Report – Chris Lovell
The New Norfolk Women travelled to Abbotsfield Park last Sunday to seek revenge against Claremont White for a narrow loss earlier in the season. It was going to be a tough game as both teams were looking to consolidate their
position on the SFL Ladder. Unfortunately, we don’t have a detailed report from the match. However, the Eagles led all day, due to accurate kicking, to record a good eight-point victory over an inaccurate Claremont outfit.

The women have now won four games for the season and currently sit second on the ladder. This is a massive improvement on previous seasons and coach Ben Shaw would be pleased with the improvement shown by the ladies so far this season. The women venture to New Town on Saturday to tackle St Virgil’s. They suffered a
massive 61-point loss the last time the teams met at Boyer Oval in May. It will be a significant game as a victory would cement their place on the ladder and would almost certainly ensure finals football for the team.