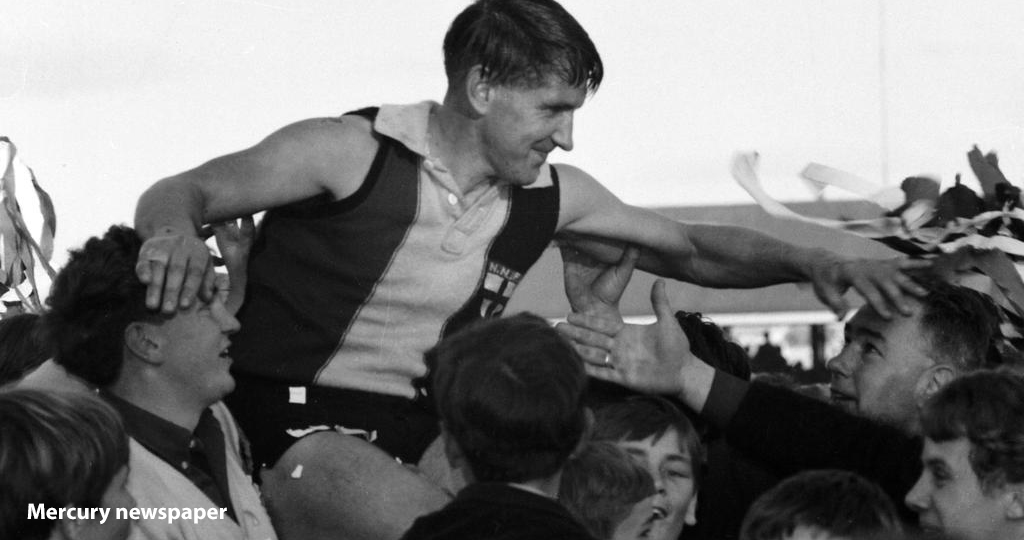 Trevor Leo Cup up for grabs this weekend

THIS Saturday, the Eagles will welcome the Hobart Tigers to Boyer Oval for the Trevor Leo Cup. The cup was initiated in 2014 in recognition of the service that Leo gave to both clubs during a distinguished football career over many years in the 1950s and 60s.

To many people, Trevor will be fondly remembered for his tremendous football career. However, there are many younger people who would not be familiar with his achievements and the important part he played in the history of the New Norfolk District Football Club. I have taken the liberty of reprinting the following history of Trevor’s football story from the AFL Hall of Fame:

Trevor Leo was a star player and leader at Hobart, New Norfolk and for Tasmania during what is often described as Tasmanian football’s golden era in the 1950s and 1960s. He commenced at Cooee on the north-west coast in 1953 and also had a season with Launceston in the 1960s.

Trevor Leo was an educator and spent the 1962 season with Launceston in the NTFA before returning south to become the captain-coach of New Norfolk in 1963. The New Norfolk Eagles had not enjoyed premiership success in the TFL since their inclusion after World War II when the competition moved to district football.

With Leo guiding the club on the field and President Les Hepper leading the off field work the Eagles entered an era characterised by finals heartbreak and, ultimately, State-wide football success. In 1963 Leo took the young Eagles, including a 17-year-old named Peter Hudson, to a top two finish. However, they were bundled out in both their finals games against the more experienced teams of Sandy Bay and then Hobart, who defeated the Eagles in the preliminary final by a solitary point.

The following season, 1964, the Eagles led the competition and won the second semi-final but were unable to repeat the feat against Sandy Bay in the grand final which was played before a record crowd of more than 20,000 people. The 1965 season saw another top two finish and heartbreaking losses in the second semi-final to Glenorchy and this time North Hobart in the preliminary final, once again by a solitary point.

The 1966 season followed the pattern established in 1963 and 1965, with the team finishing top two, only to succumb in the finals series. The 1967 campaign commenced with the transfer of Peter Hudson for his long awaited VFL debut with Hawthorn. This season the Eagles were bundled out in the first semi-final and the premiership window for the talented Eagles of the 1960s appeared to be closing.

However, in a fascinating 1968 season, the Eagles finished the roster on top and hopes were again elevated, though reality struck when they came up against the reigning premiers, North Hobart, in the second semi-final and were defeated by 53 points. Following this reality check, Trevor Leo steeled the Eagles and they carried all before
them in defeating Clarence in the preliminary final and then North Hobart comfortably in the TFL grand final for their long awaited first TFL title. To add icing to the cake, they defeated Scottsdale in the state grand final to take out the title of Tasmanian football premiers for 1968. This would be Trevor Leo’s final game as a player.

The 1969 season would prove to be Leo’s final season in charge of the Eagles, and they once again contested the finals series but had to settle for a semi-final win and a preliminary final loss. In all, Trevor Leo led the New Norfolk Eagles in the TFL for seven seasons and seven finals series. The Eagles played 15 finals games, including the 1968 state grand final, under Trevor Leo for five hard-won victories, but none were sweeter than the triumphs which delivered the title “New Norfolk: best football team in Tasmania”.

Trevor Leo is credited with more than 250 senior games for Cooee (1953), Hobart (1954-61), Launceston (1962) and New Norfolk (1963-68), and intrastate and state representative games. On 18 occasions during his career, he represented Tasmania in interstate football, including the 1956, 1958 and 1961 Australian National Carnivals. He was also Tasmania’s coach at the Australian National Carnivals in 1966 (Hobart) and 1969 (Adelaide). He retired as a player following his 1968 triumphs with New Norfolk but stayed on as coach for one more year in 1969. In 1974 he returned to Hobart where he was coach for the season.

There is no doubt that Trevor is a legend of the New Norfolk District Football Club. He has been invited to Boyer Oval on Saturday to present the cup named in his honour, to the winning team. We warmly welcome Trevor back to Boyer Oval. It would be fantastic to see all our supporters there on Saturday to cheer on the Eagles and to welcome home a legend of the club. I am sure Trevor would be pleased to see you there.

Saturday will kick off at 10 am with our Colts playing Hobart. The Reserves and Seniors follow, with the Seniors looking to get their season back on track and move back into the top five with a win over the Hobart Tigers. It is sure to be a great day of football and we look forward to seeing our supporters there to cheer on all teams. The women play Claremont White at Abbotsfield Park on Sunday.