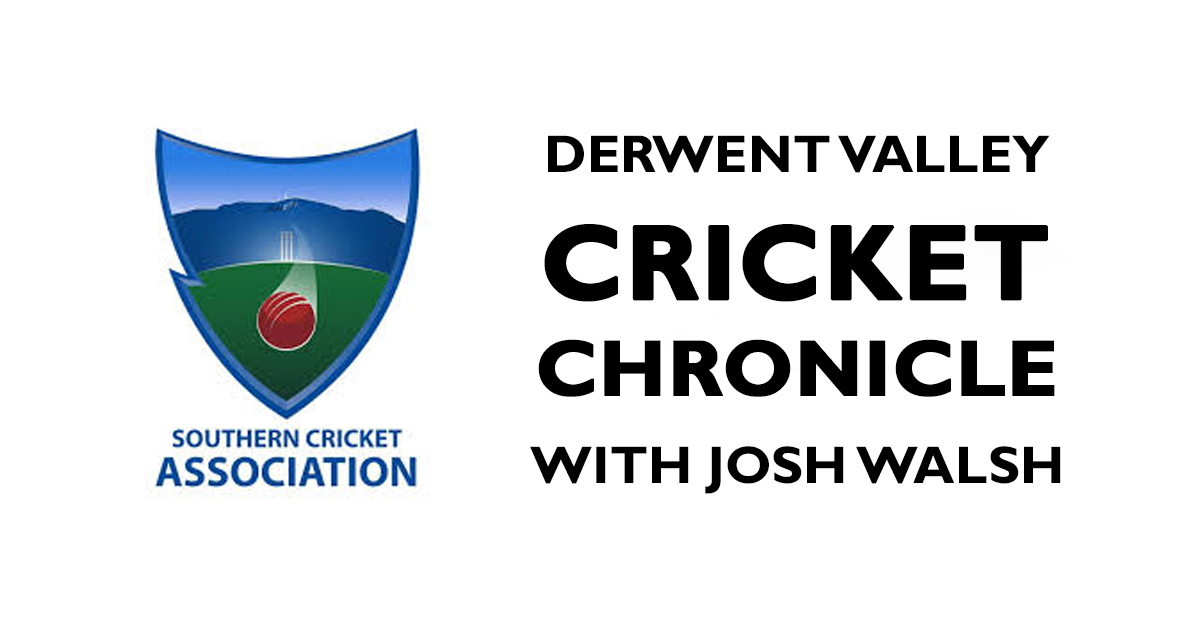 The cricket season is BACK! On a weekend where Tasmania showcased four seasons in a day, most of the Southern Cricket Association T20 games were able to get under way and there were some absolute classics. Without further ado, here’s the first edition of the Cricket Chronicles by Josh Walsh.

FIRST GRADE
New Norfolk I v Richmond/Cambridge at Tynwald Park: Blake Kemmler was the pick of the batsmen for New Norfolk, with the wicket-keeper scoring 25 runs. Blake was patient and his defence was solid, attacking any balls in his zone. Tom Briscoe used his trademark power to smack 21 from 11 balls, an excellent effort considering the situation. Blake Kemmler: 25 (24 balls); Tom Briscoe: 21 (11 balls); New Norfolk finished on 9-119 off 20 overs. Of the bowlers, Tom Briscoe was unstoppable, picking up an incredible four wickets off four overs. The left-armer bowled with serious heat and he had Richmond/Cambridge nervous, putting the ball in tremendous spots during his spell. Glenorchy’s Brandon Kopper filled in for New Norfolk and didn’t leave empty handed, taking three wickets with him. His bowling was supported by Seb Wishart, who took two wickets with his darts. Josh Rowlands finished his spell with a wicket, giving New Norfolk a great win. Tom Briscoe: 4-8 off 4 overs; Brandon Kopper: 3-21 off 4 overs; Seb Wishart: 2-13 off 4 overs (1 maiden); Josh Rowlands: 1-10 off 1.4 overs. Richmond/Cambridge finished all out on 92, giving New Norfolk the win.

SECOND GRADE:
New Norfolk II v Rokeby at Tynwald Park on Saturday: Batting in torrential rain for portions of their innings, New Norfolk worked hard during their 20 overs. Things started terribly for New Norfolk, with Steve Sillifant getting a diamond duck on the very first ball of the innings (and first ball of New Norfolk’s season). Things could only improve from there, with opener Rohan Heron looking to make amends for the runout. Stewart Rice went absolutely ballistic during his innings, smashing a number of sixes around Tynwald Park. His innings was overshadowed by Coby Kemmler, who despite suffering a nose bleed before he faced his first ball, wowed the crowd with an array of shots to help get New Norfolk to a competitive score. Coby Kemmler: 48NO (43 balls); Stewart Rice: 31 (15 balls); Rohan Heron: 20 (29 balls); New Norfolk finished on 4-134 off 20 overs. Stewart Rice was the pick of the bowlers, taking two wickets. Tyler Benson opened the bowling and picked up a wicket, a great reward for a youngster that has a very bright future. Unfortunately, Rokeby’s class proved too much for New Norfolk and they ended up chasing down the runs relatively easily. Stewart Rice: 2-31 off 4 overs; Tyler Benson: 1 25 off 3 overs; Rokeby finished on 3-135 off 17 overs, giving them the win.

FOURTH GRADE
Bothwell v Claremont at Abbotsfield Park on Sunday: Some incredible bowling from the Eyles boys gave Bothwell early momentum in their match against Claremont. With six wickets between them, Nathan, Blake and Matthew Eyles showed the competition that they will be a force for the season. Jamie Devine picked up a wicket also, and with the fielders backing up the bowlers well, Bothwell restricted Claremont to a low score. Nathan Eyles: 3-11 off 4 overs; Blake Eyles: 2-19 off 4 overs; Matthew Eyles: 1-14 off 4 overs; Jamie Devine: 1-9 off 2 overs. Claremont finished on 9-91 off 20 overs. Unfortunately for Bothwell, Cody Eyles was the only person in the side to score over 20 runs as Claremont ripped through their batsmen. Nathan Eyles capped off a good individual game to finish on 13 runs but it wasn’t enough, with Claremont’s class too much. Cody Eyles: 24 (22 balls). Bothwell finished all out for 58, giving Claremont the win.

FIFTH GRADE
Gretna vs Montagu Bay at Gretna on Sunday: Gretna took on Montagu Bay in a classic encounter. With the ball, Adam Browning was fantastic, finishing with four wickets in an epic display of bowling. He had the ball on a string as he ripped through the opposition. Simrampreet Singh was a wizard, bamboozling the opposition with his spin bowling. Corey Ransley bowled with his typical express pace to pick up a wicket, limiting Montagu Bay to a score they can chase. Adam Browning: 4-26 off 4 overs; Simrampreet Singh: 2-10 off 4 overs; Corey Ransley: 1-17 off 4 overs. Montagu Bay finished on 8-119 off 20 overs. With the bat, Corey Ransley scored a patient 37 off 37 balls, setting up the innings for his teammates. Captain Josh Whitford scored 26NO and along with milestone man Jordan Hastie (3NO, playing his 150th game for Gretna), contributed to the match winning partnership that went down to the last over. Whitford was cool under pressure and his and Hastie’s experience got the boys over the line. It was a day of celebration for Gretna, who also had another milestone, with Wade Gleeson playing his 100th game for the Gretna second team. Although he didn’t score any “quick singles”, he would’ve been stoked with the win. Corey Ransley: 37 (37 balls); Josh Whitford: 26NO (20 balls); Gretna finished on 4-121 off 19.2 overs, giving them the win.

SIXTH GRADE
New Norfolk v Montagu Bay at Tynwald Park on Sunday: New Norfolk batted first and looked set for a big score, with Troy Smith playing excellent shots on his way to 34. Chris Ashcroft scored 46 in a patient innings that allowed his teammates at the other end to attack. Mitch Crosswell decided he wasn’t going to wait around, scoring a quick fire 25 off 11 balls. In the end, New Norfolk posted a great score that was going to be hard to beat. Chris Ashcroft: 46 (40 balls); Troy Smith: 34 (22 balls); Mitch Crosswell: 25 (11 balls). New Norfolk finished on 8-152 off 20 overs. With the ball, New Norfolk relied on batting genius Troy Smith to deliver the goods at the end of the innings. In trouble and with the score at 107, Smith took 3 wickets in a match winning performance. He was well supported by captain Aaron Triffitt, who took a wicket bowling at the death. This was Smiths first game in a couple of years, last playing for Bushy Park before they folded. He’s a welcome addition to the Redcaps and a dominant player. Troy Smith: 3-11 off 4 overs; Aaron Triffitt: 1-34 off 4 overs. Montagu Bay finished on 5-124, giving New Norfolk the win.

SEVENTH GRADE
Bothwell v Wellington at Eady St on Sunday: Nathan White and Peter Hansch had the ball talking, picking up 7-41 off 7 overs between them. Both men were extremely accurate and hard to face, putting intense pressure on the opposition. Ryan Triffitt tried hard all day for his wicket, bowling a good spell. Nathan White: 4-20 off 4 overs; Peter Hansch: 3-21 off 3 overs; Ryan Triffitt: 1-16 off 3 overs. Wellington finished on 8-113. With the bat, Ashley Browning score a half century in an exquisite performance, one that will have his teammates talking for a while. He found gaps everywhere and looked awesome, willing himself and his side on to victory. Simon Eyles scored 25 and Nathan White 20NO to cap off a tremendous performance for Bothwell, who looked very strong during the game. Ashley Browning: 50 (35 balls); Simon Eyles: 25 (35 balls); Nathan White: 20NO (17 balls). Bothwell finished on 3-116, giving them the win.

Molesworth v Montagu Bay at Boyer Oval: Molesworth had a number of quality batsmen score runs, with Liam Triffitt leading the charge with 34 off 46 balls. Manager at The Valley Sportsbar, Liam proved that he can pour from taps and score through gaps, finishing with a good score. Josh Ransley decided that he wasn’t going to wait around, smacking 28 off 13 balls in a quick display of power. Hayden O’Keefe scored 22 off 15 balls in an effort to match Ransley’s power, which allowed Molesworth to finish on a good score. Liam Triffitt: 34 (46 balls); Josh Ransley: 28 (13 balls); Hayden O’Keefe: 22 (15 balls). Molesworth finished on 126 off 20 overs. With the ball, Josh Ransley was a “freak”, snagging three wickets in a great display of bowling. He was supported by Sam Triffitt, who took a wicket and bowled a nice line and length. Their bowling was enough to get their side over the line. Josh Ransley: 3-12 off 4 overs; Sam Triffitt: 1-14 off 4 overs. Montagu Bay finished on 93, giving Molesworth the win.