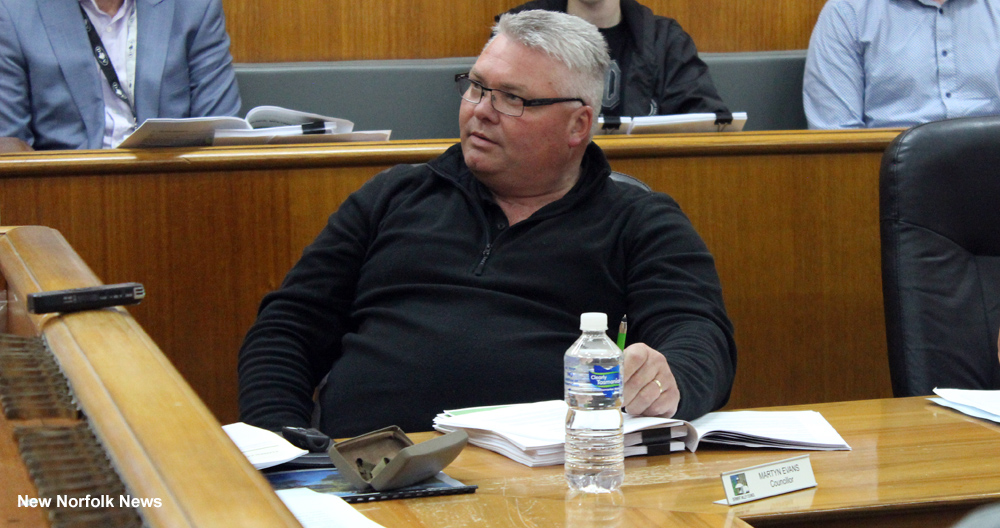 THE Tasmanian Electoral Commission will conduct a recount of votes from the 2018 council elections to find a replacement for former mayor Martyn Evans who has lost his seat on the Derwent Valley Council after being absent from three council meetings without having had leave granted.

The TEC began contacting potential candidates earlier today (Monday) after being informed that Mr Evans’ seat on the council was now vacant. On December 13 it will conduct a recount of the votes that elected Mr Evans in 2018, to find a replacement to serve the remaining 12 months of his term.

Mr Evans last month told New Norfolk and Derwent Valley News that he was unsure of the impact of the Local Government Act’s three-strikes rule after his absences from the August, September and October meetings, but he was looking forward to serving out his term. He said a council decision to change the date of the monthly meetings was the cause of his absences, but he had remained active as a councillor.

The matter came to a head at last week’s council meeting when former councillor Wayne Shoobridge used public question time to ask mayor Ben Shaw and general manager Dean Griggs whether they had fulfilled their obligations under the Local Government Act to report that a seat on the council was now vacant due to the sitting member having been absent from three monthly meetings without leave.

Cr Shaw answered that due to an oversight the matter had not be reported and he believed it to be the responsibility of the general manager. After a follow-up question from Mr Shoobridge, Cr Shaw said he would make the necessary report if that was required by the Local Government Act.

During confirmation of the council meeting roster for 2022 later in the meeting, Mr Evans said this would enable councillors to plan their work around their council obligations for the year ahead.

The remaining unelected candidates from the 2018 council election will be invited to take part in next month’s recount. These are Phil Bingley, Kristy Hall, Matt Hill, James Graham, Chris Lester, Tony Nicholson and Wayne Shoobridge. Four of the seven are former councillors and two are former council officers. All will have several days in which to notify the TEC about whether or not they wish to be included in the recount.

This will be the third vacancy filled by recount on the current council. Natasha Woods was elected when Anne Salt resigned in June 2019, and former councillor Frank Pearce was returned to the council table following the resignation of Rachel Power in October 2019.

Mr Evans was first elected to the council in 2007, when he attracted the second highest number of votes behind Craig Farrell. He was elected mayor two years later and was returned for a second term as councillor at the 2011 election, topping the poll with a massive increase in his primary vote from 529 to 1549. He was returned as mayor and councillor at the election in 2014, with 722 primary votes. He did not nominate for the mayor’s position at the 2018 election but was returned as a councillor with 232 votes.

The Vigilante News and the Derwent Valley Gazette have this evening both claimed “exclusive” status for their Facebook reports of Mr Evans’ removal from the council.