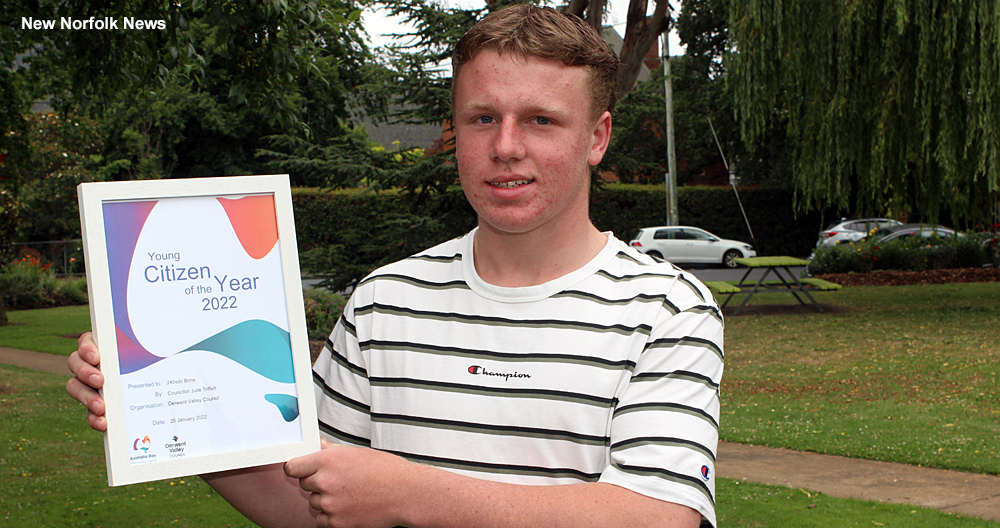 FIFTEEN year-old J’Khobi Bone was named the Derwent Valley municipality’s Young Citizen of the Year during the Australia Day ceremony at New Norfolk last week. The St Virgil’s College student was recognised for his many sporting and community contributions.

He began playing basketball at the age of seven and last year represented Tasmania at the Under-16 Australian Junior Championships where his team won the bronze medal. e bronze medal, a huge achievement of the 10 boys on the team. In the past two years he has coached two teams of students from St Brigid’s Catholic School and he has been heavily involved in various clinics at the Derwent Valley Police and Community Youth Club.

J’Khobi has also helped his grandmother in running a movement to music program at Corumbene nursing home. He is a past school captain at St Brigid’s, supporting the school community through various fundraising projects.

J’Khobi Bone is the 32nd recipient of the title of Derwent Valley Council Young Citizen of the Year. The first recipient was Olympic basketballer Kathy Foster in 1984.  Accepting his award, J’Khobi thanked his family and friends and wished everyone a happy Australia Day. J’Khobi’s sister Shakira won the same award in 2016.