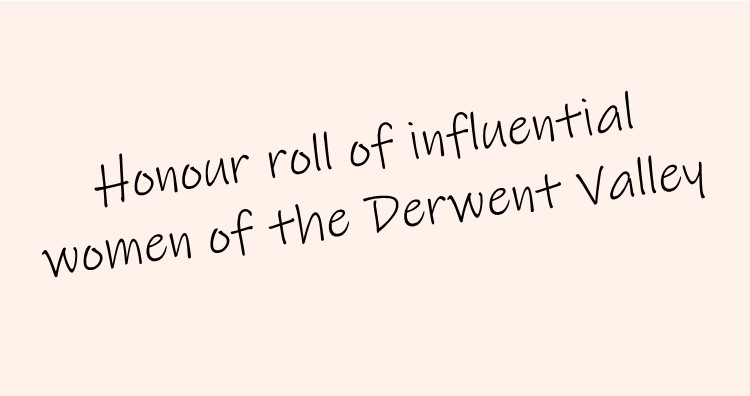 Announcing the inaugural list of more than 80 names, Julie Triffett said the organisers acknowledged all women of the Derwent Valley, “from the women who moved their family to the hopgrounds and smallfruit farms to earn money for books and uniforms to send their children to school; the gardeners who grew the food for their families; and those women who nurtured good citizens; to the women who served in the land army in Tasmania, who were employed at the Peg Factory, Willow Court, Cottage Hospital, or as sales assistants, teachers and administrative staff,” Mrs Trifffett said.

“Some names you will recognise, others maybe not, some you might agree with, others not,” she said. “This list has been compiled by consideration of each woman’s contribution to the community and the world, rather on the basis of popularity. These are all women who were born in or lived in the Derwent Valley and have influenced people and communities in our Valley, Australia or internationally. They may have excelled in community service. standing for and with our families, organisations and communities. They may have influenced the hearts and minds of our children through teaching and working in our schools. They may have operated businesses that contributed to the Valley’s economy. They may have served our country in the darkest of times. They may have nurtured and cared for others in times of illness.

“There are so many ways that women have influenced life in the Derwent Valley both in the past and now. This list is the beginning of recognising the achievements of women in the Derwent Valley. It was not possible to list all of each woman’s achievements as there are many facets to every woman. The list is open-ended and if you feel that someone has been omitted, and you want them to be included, or you want your name to be deleted, please contact a Derwent Valley International Women’s Day group member. The list will be reviewed and expanded prior to International Women’s Day each year. There are tentative plans for an e-book in the future. Obviously, much research will have to be done, and permissions sought, to do justice to the women listed,” Mrs Triffett said.