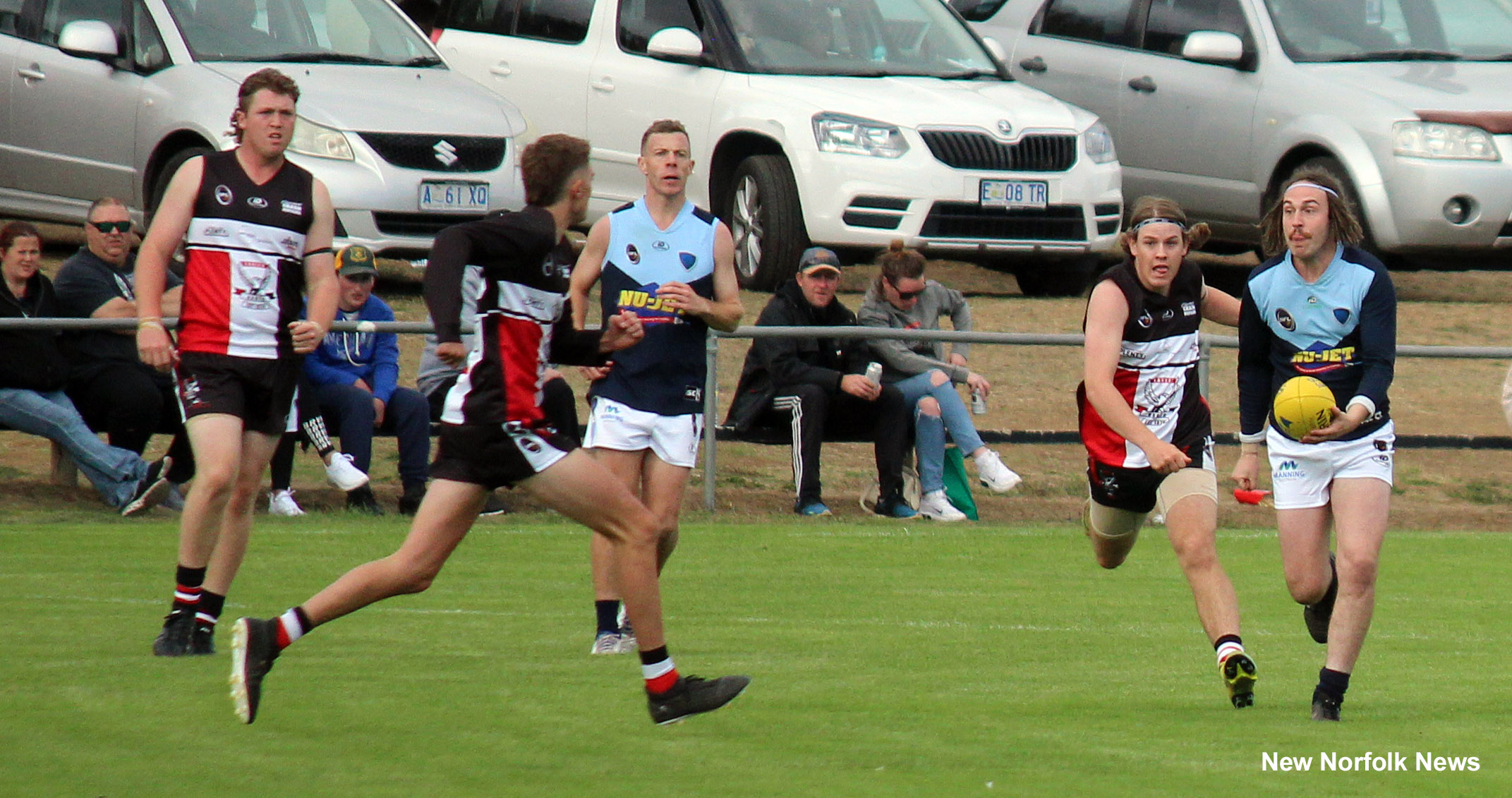 Hard day at home for the Eagles in SFL Round 1

ROUND 1 v LINDISFARNE 2022
OUR three men’s teams were at home on the big Boyer Oval last Saturday for the first game of the 2022 season. A new-look Seniors side, under first-season coach Tim Butterworth, faced a daunting task against one of the SFL’s leading premiership contenders, Lindisfarne.

With the loss of experienced players such as last season’s best and fairest winner Jamie Sokolski, Tyler Ford, Jack Hills and Corey Jetson to Bothwell and Jack Crossin to Claremont and Reece Heald it will be left to some old hands and an influx of youth to carry the flag for the club this season. New players include Riley Higgins (North Hobart); Brayden Butler (North Hobart Juniors), Zayden Kelly and Jaythen Poulson (Glenorchy) and the return of Caleb Triffett and Sam Webb.

Coach Butterworth had the following to say about season 2022: “As a young group with an average age of 20, I think we will be underestimated by our rivals. We will be the under dogs against some of the bigger teams in the competition, but we love that title. I am sure we will shock a lot of people and teams within the SFL competition. We still have a variety of size and experience in our side, but our speed will be a surprise to everyone we play. Our focus will be to build confidence and experience in our younger players. We are thrilled to welcome some new and exciting young players to the club who will add to our current crop of developing youngsters. We will continue to strive to build a solid foundation for the successful future of the club.

THE new-look Eagle outfit struggled after the half-time break in the season opener for the 2022 season against the Lindisfarne Two Blues to go down by 67 points at Boyer Oval on Saturday afternoon. The Eagles presented several new young players for their first Senior games at the club who provided the home crowd with some exciting passages of play during the contest.

The Eagles were busy early in the first term kicking to the dressing room end of the big Boyer Oval and were doing most of the attacking in their forward half as the experienced Ben Lovell pulled down a big strong grab in front of goal at the 8-minute mark for the Eagles first major. The home side continued to go on the attack as Brayden Chaplin crumbed the footy beneath a marking contest with a clever snap for the Eagles second followed by another six pointer from Josh Clifford which gave the eagles a 17-point lead.

The Two Blues took a while to settle into the contest but answered through ruckman/forward Oliver Rand and backed it up with another from full forward Sam Adams late in the quarter with quarter time scores reading New Norfolk 3.0 (18) to Lindisfarne 2.3 (15).

Big Eagle Jacob Daley was dominant in the ruck and around the ground, onballers Brock Triffett and Josh Hills gathered several possessions in heavy traffic and young recruit Riley Higgins also chimed in and looked classy with ball in hand. Early in the second term both sides had opportunities to score early with the Two Blues inaccurate in front of goal missing some crucial shots while pacey Eagle onballer Jye Bearman snapped a classy goal on the run from 35 metres out to keep the home side in front on the scoreboard.

The visitors answered quickly through Sam Adams and the hard running Kase Miller as the Two Blues started to look dangerous with quick ball movement by using the footy more efficiently than they did in the first term. The Eagles bounced back with a strong mark from the returning big key forward Caleb Triffett as he booted the Eagles fifth from 45 metres out. The Two Blues had other ideas taking the lead by 5 points at the 19-minute mark and in a quick burst of team football they found key forward Sam Adams who slammed on three quick goals by leading into the open spaces of the oval to go into the main break with a 24-point margin, Lindisfarne 8.6 (54) to New Norfolk 5.0 (30)

Unfortunately for the Eagles the Two Blues dominated the play in the second half of the game kicking 10 last half goals through the likes of veteran Michael Cassidy, Sam Adams, Teege Westbury and Jack Gleason among other contributors. The Eagles were held scoreless in the third term but bounced back with a 4 goal last quarter which featured some exciting moments from Eagle young gun Riley Higgins booting a goal on the run by eluding two Lindisfarne opponents and another goal some moments later which involved Higgins to Bailey Chaplin to Caleb Triffett who finished with a goal in what was a great chain of play and a sign of what supporters can look forward to in season 2022.

Ruckman and utility player Jacob Daley played a great game for the Eagles along with Josh Hills, Brock Triffett, Josh Farrow and Josh Clifford. Young players such as Bailey Chaplin, Brayden Butler, Riley Higgins, Jaythan Poulson and Zayden Kelly all showed their potential at different stages of the game and supporters can look forward to what they can bring to the club in coming weeks.

Coach Tim Butterworth was reasonably happy with his side’s performance in the first half but disappointed with the way the Eagles faded in the last half and said after the game that there will be highs and lows with a developing list of young players, but he is keen for the challenge ahead. The Eagles face another big challenge this week against last year’s reigning premier in Cygnet at Boyer.

THE Eagle Reserves were severely undermanned for their first match of the season. Due to COVID-19 and injuries the Reserves were still trying to find players on Saturday morning. Well done to the following Colts players who doubled up after playing in the Colts game prior to the Reserves game: Riley Blackaby, Jordan George, Jacob Goodsell, Jye Graham, Jack Miller, Beau Kline, Mitchell Hay, Seton Hine, Bailey Wheeler.

While the game was one-sided and resulted in a massive win for Lindisfarne, it was a credit to those who turned up on the day to ensure we did not forfeit the match. Thank you to all those who assisted on Saturday. With the return of several players, it is hoped that the boys can put up a better performance against Cygnet on Saturday.

UNFORTUNATELY our originally appointed Colts coach Paul Clark is unwell and cannot undertake the coaching duties this season. We wish Paul all the best and hope for a speedy recovery. Corey Ransley has stepped up to the plate and taken on this important role for the 2022 season. We thank Corey for undertaking this role at late notice.

A fortnight out from the start of the season, we were struggling to find enough players to field a Colts team. With a lot of hard work from Damian Triffett, Anthony Bean and coach Corey Ransley we managed to get enough players together put a team on the track.

With only one training run under their belts and with many new players we were not expecting much from this group in their first outing. Lindisfarne hit the ground running in the first term and peppered the goals to lead by 22
points at quarter time. The second quarter saw the home side start to settle and get a couple of goals on the board. However, Lindisfarne continued to control the match and scored another three goals to lead by 30 points at half time, 6.8 to 2.2.

The second half saw the young Eagles show what they were capable of by restricting Lindisfarne to 1 goal for the quarter and adding 3 goals to go into three quarter time trailing by 18 points: 7.9 to 5.3. The final term was a great quarter for the young Eagles as they really ramped up the pressure on Lindisfarne and with only two minutes remaining had an opportunity to take the lead. Unfortunately, a point resulted, and the visitors ran the ball to the other end of the ground for goal which gave them a 9-point victory.

It was a fantastic effort by the boys once they found their feet and started to understand how their teammates played. A great debut by Dylan Branch saw him kick 5 goals while Beau Kline, Samuel Jackson, Hayden Burns and Jude Holbrook turned in great performances. There is no doubt there is talent in this squad and coach Corey Ransley will be looking forward to getting some training into the boys to see how far they can go this season.

THE New Norfolk women play their first game on Saturday against South-East Suns at Boyer Oval at 9am. After a few tough years, the women improved to win their first ever game last season and participate in finals. Under new coach Dean King, with natural improvement and with the addition of Zoie Crawford (Glenorchy), Olivia Harris and Chloe Ford (Brighton), Melinda Green (Lindisfarne) and new players Siobhan Smith, Montana Percy, Nikayla Roach, Melody Bell and Clancy Topp, season 2022 promises to provide another step in the development of the team. Continued work on the players techniques and game plans with set the team up to go deeper into finals this season.