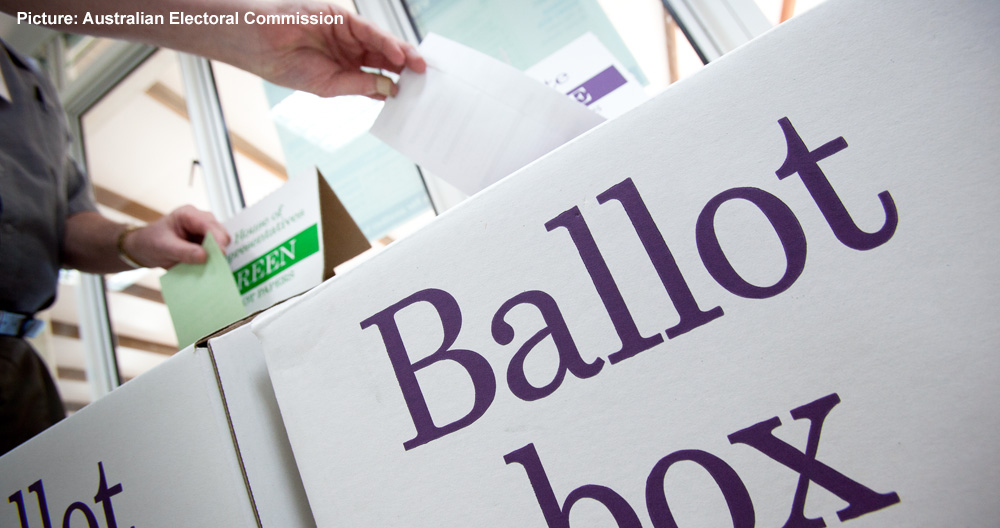 Meet the candidates seeking your vote in Lyons

EIGHT candidates are seeking election as the Federal Member for Lyons in this Saturday’s general election. Seven of them have responded to the New Norfolk and Derwent Valley News’ invitation to provide a statement for publication.

SUSIE Bower has a passion for serving her local community and a reputation for delivering results. She served on the Meander Valley Council from 2018-2021, has spent more than 20 years working in local government and the higher education sector, and has broad management experience. She has previously held roles including chief executive of the Bell Bay Advanced Manufacturing Zone and director of Community and Economic Development at the Dorset Council. She has a strong interest in improving educational outcomes for students in Tasmania, and has established four scholarship programs for students. Susie is a member of several sporting organisations including the Westbury Bowls Club and Deloraine Squash Club. Recently, Susie announced that a re-elected federal Liberal Government would invest $1 million towards the Boyer Oval Pavilion Project at New Norfolk to provide new facilities at the sports ground to support female players and local teams. As someone who has worked and lived in regional Tasmania, Susie Bower has her finger to the pulse on the issues that matter most to Tasmanians. Susie is focused on delivering better outcomes for Lyons, and her plan for the electorate includes bringing down cost of living expenses for families, supporting rural health, creating jobs for locals, and ensuring young Tasmanians have the skills and training they need to join the workforce. Susie is working as part of a federal Liberal Team that has a plan to build a strong economy and a stronger future for Tasmania.

JASON Evans and his family have lived in the Southern Midlands within the electorate of Lyons for almost five years. Jason has had a diverse range of roles from running his own small business, working in community radio and community services focusing on mental health, homelessness and housing. Jason was studying travel at the time of the pandemic. He watched as the borders closed, as one country became state against state, families and loved ones were separated, and businesses closed and laid off their staff. “We can never go back and repeat the last two years ever again,” Jason said. “It’s time for us to unite with our neighbours, our friends and family. It’s time to be able to travel, work or play regardless or our vaccination status. It’s time for us to make Lyons, Tasmania and Australia great.” Jason has joined the United Australia party, passionate and motivated to improve our communities across the Lyons electorate. “Not only do we live in such an amazing area, but we have incredible people making positive changes. We’re not going to get a different result by voting the same way we always have,” he said. “As a first-timer doing such a campaign, I can tell you the first thing I have done is listen to the people in our communities on what is important to them and their neighbours. “As we have seen, there is a higher percentage of undecided voters who were red or blue voters their whole life but now feel the major parties have lost sight of the people they represent. “As the Lyons electorate encompasses half the state, the concerns are real on where this country is going. Only the United Australia Party has a plan to pay off our $1 trillion of debt from Labor and Liberal. “Home interest rates would be capped at 3% for five years under UAP,” Jason said.

EMMA has a deep love for Australia, her partner fought for our freedoms and it is deeply instilled in her to honour his service. One Nation strongly opposes vaccine mandates and will push for the introduction of Citizen Initiated Referenda, enabling Australian citizens to put forward legislation or a referendum question without waiting for politicians to listen and act. Emma has more than a decade of small business ownership. She has trained many staff and felt there was nothing more rewarding than providing someone with the skills to go forth into the world and succeed – she proudly supports One Nation in its increasing national apprenticeship scheme to bolster homegrown trade and jobs. Emma saw personally how the health system was beyond capacity prior to COVID-19 after being seriously injured in a car accident. She recognises the need to bolster the number of regional doctors, nurses, and other critical health professionals and One Nation’s policy to establish four 24/7 Health clinics to provide bulk billed mental and physical healthcare, easing the current system and allowing everyone access to medical care. Her love of this land and all of its challenging facets aligns with One Nation policies on responsible gun ownership, property and water rights and providing a sustainable and affordable future for the coming generations. Emma has travelled extensively across the state and is prepared to continue traversing Lyons – Tasmania’s largest electorate (with her loyal Labrador at her side). If you’d like to know more about Emma Goyne you can find her on Facebook or at onenation.org.au/lyons. If you’d like to read One Nation Policies, visit onenation.org.au/issues. For a copy of the Tasmanian Federal Plan or to speak to her personally, call 0418 396 040.

AUSTRALIA has spent two years under strict control from our own government. The COVID-19 pandemic was used as a lever by politicians to take control of every day Australians’ lives in a way we have never seen before in our history. Now that it’s election season, suddenly those laws have vanished overnight. The mandates are gone, travel restrictions have been completely removed, and those rules that remain make no sense. There has been no review. There has been no accountability. There hasn’t even been a politician acknowledging that their decisions were devastating to Australians’ way of life. They have just gone back to their usual tactics: slinging mud at each other and arguing over who’s the lesser of two evils. Meanwhile, people’s businesses have collapsed, families have been torn apart, and the Australian people have been turned against one another. The Liberal Democratic Party aims not only to make government more accountable for their decisions, but also to put into place laws to protect citizens from a corrupt government abusing their power. We are a party that wants government to be small, and believe that the people know what solutions work best for their communities. The Liberal Democratic Party wants to help communities by reducing the pressure of federal taxes and regulations, giving every day Australians the power to fix the problems they see and live the lives they want to live. Don’t vote to keep the status quo. It’s time to shake things up.

I’M a mother and a grandmother, and I’ve spent my life fighting for social justice and environmental protection. I’m running in this election because I want to be part of a courageous and caring parliament that takes immediate climate action, that puts the needs of everyday people before the profits of big corporations, and that values the knowledge of First Nations people. Lyons is a beautiful, diverse electorate full of wonderful people. It’s the beating heart of Tasmania. It’s been such a privilege to travel throughout Lyons over the past year, hearing stories from people about their lives. All too often they’re talking about the same issues – healthcare, housing, education, and climate change. It’s clear our communities have been let down by successive governments who have made the profits of big corporations their priority, and who have never really tried to fix the issues facing everyday people. This is what’s driving me to make change. I also deeply feel my responsibility as a mother and grandmother to secure a safe climate for future generations. The Greens are offering a positive vision for a better future, with policies that will make a real difference to people in Lyons – like putting dental into Medicare, capping rents, making childcare free, and raising the rate of government pensions. By putting the Greens in balance of power, we can push the next government to finally take real action on the big issues affecting all of us. This election, Vote 1 Greens.

EVERY day that I’ve been the federal Member for Lyons has been a privilege. It is my great hope that the electors of Lyons will again put their trust in me on May 21. I have a simple philosophy when it comes to this job and to life in general – be honest, be yourself and work hard. Since being elected in 2016, I’ve hosted hundreds of Mobile Member stalls across the electorate, including regular stalls in New Norfolk, and my team and I have door knocked thousands of homes and called thousands more. And what’s clear is that people want and need a change of government. The Liberals haven’t addressed access to healthcare – the number one issue electors raise with me in the Derwent Valley – and they’ve failed to address the skyrocketing cost of living and housing affordability. But Scott Morrison doesn’t care. His only plan is re-election. Labor has a detailed plan to lower the cost of living, improve healthcare, and help more Tasmanians find a home. We will lower the cost of living by investing in childcare (which also lifts women’s participation in the workforce), supporting fee-free TAFE and making more things here. We will fund three bulk-billing Urgent Care Clinics in Tasmania to take the pressure off the hospitals, and restore bulk-billing incentives for regional mental Telehealth services. And our Housing Australia Future Fund will build 30,000 affordable homes in our first five years. In New Norfolk, we’ve committed $5 million to help fund priority projects such as Boyer Oval and Tynwald Park and improve community health and well-being in the Derwent Valley. By voting for me, Brian Mitchell, you’re voting for a local MP who cares, who works hard and who delivers results, but just as importantly you’ll be voting for a better future for Australia.

I’M Troy Pfitzner, running with the Jacqui Lambie Network for the seat of Lyons. I am a father of three young boys. My wife of 16 years, Bec, is a nurse. I live in Brighton. My day job is running our small business. We employ 4-5 staff and get out to support our community and sports clubs whenever we can. I have always been an armchair critic of career politicians who look out for themselves, but not everyday Tasmanians like you and me. My wife said to me one day: “That’s just how it is. You can’t change it”. Maybe reverse psychology works, because she inspired me to have a crack at this! I want my sons to see that if you care about something, and if you want things to change – stand up and do something about it. We need change now. Our health system has been in crisis for years. It’s next to impossible to see a doctor or go to a hospital. Both the major parties have done nothing to fix it. People can’t afford groceries and rent – we need to raise pensions and benefits and reduce tax for everyday Australians so we have more money in the pockets of people doing it tough. And we need to fix the housing crisis. Jacqui got us $200 million to build more houses for Tasmanians. It’s a great start, and we can do more if she gets backup in Canberra. A lot of people say they want change from Liberal and Labor. If that’s you, and you’d like things done differently, vote for me and the Jacqui Lambie Network in this election.