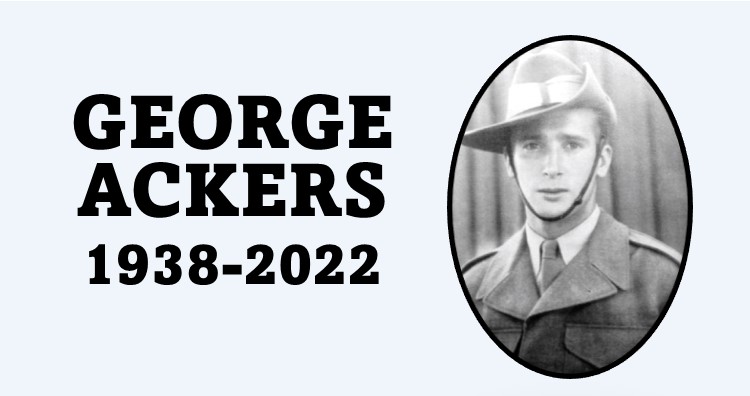 FORMER soldier, mechanic and psychiatric nurse George Ackers was farewelled at a graveside funeral service at the Malbina Cemetery earlier this year. George Lance Ackers was born in April 1938 to John and Molly Ackers. He grew up in the grounds of the Lachlan Park Hospital (later known as Royal Derwent Hospital), where his father was a senior member of staff.

Three years before George was born, his father Jack had been appointed to the newly-created position of Staff Supervisor and Instructor at Lachlan Park, transferring from Mont Park Mental Hospital in Victoria to take up the role. Mr Ackers quickly put down roots in New Norfolk, joining the RSL and, in 1937, marrying local girl Molly Leeson. He was later elected to the town council.

George’s arrival was followed by that of his sister, Wendy, and there were two half-sisters. George attended the New Norfolk State School and went on to the Hobart Technical School. Joining the workforce after completing school, George gained a position as an apprentice mechanic at Australian Newsprint Mills and worked there until he was called up for military service when he was 18.

Returning to New Norfolk after completing his army service, George married Pamela Rainbird in 1958 and the first child, Belinda, was born in 1959. Then followed Trudy, Sharon, Donna, Scott, Peter and Jason. The family settled at Back River Rd, Magra, where disaster would strike them in 1967 when their home was lost in the Black Tuesday bushfires. A new house built on the same site.

After his time working at Boyer, George changed professions and followed his father to work at Lachlan Park Hospital, where he became a registered nurse. He worked at the hospital for 45 years and also had a stint as a nurse at Risdon Prison.