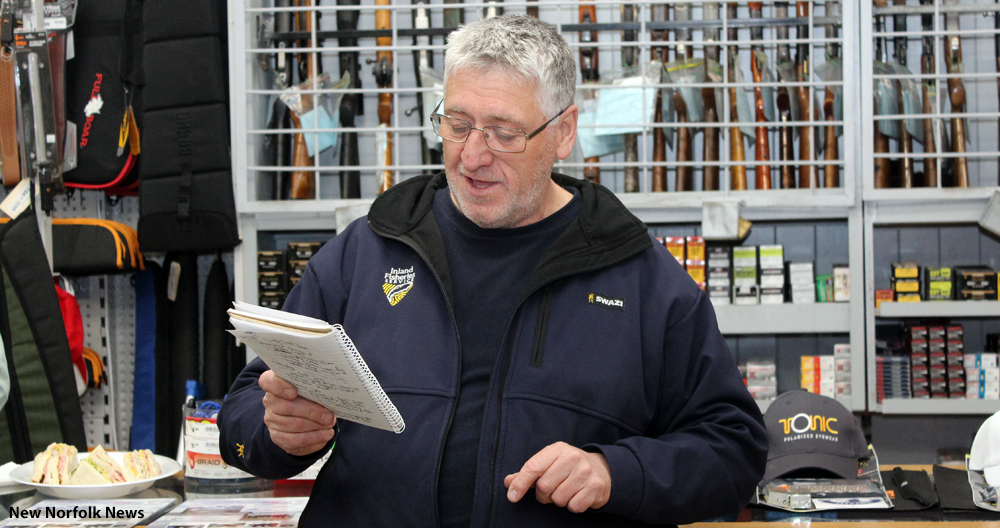 Trout fishers turned out for the good oil on opening weekend

THE brown trout season opens tomorrow, August 6, and a big group of Derwent Valley anglers turned out yesterday to get the latest advice at the Williams Outdoors trout fishing information night.

Inland Fisheries Service spokesman Rob Freeman said there had been a pleasing increase in the number of licensed junior anglers last year and he said some of that increase could be attributed to the activity of the New Norfolk Licensed Anglers Association in promoting junior angling.

Looking at fishing opportunities on opening weekend, Mr Freeman said 1500 rainbow trout had been stocked into the Bradys chain of lakes over the last week. “We’re a bit light-on for brown trout in the Bradys system and the King William traps didn’t have a great spawning run there, so we’ve topped it up with some rainbows,” he said. “They average 1.5kg and some of those top-out at about 2kg, so they will really be worth a crack at, up at Bradys this weekend or next weekend.”

Mr Freeman said Tooms Lake had shown improvement with increased water levels and the fish are putting on a lot of condition. He recommended a visit to this water in September after the season-opening crowd had dispersed. “One of the other places you might go for something a little different is Camden Dam in the North-East, not that far from Launceston,” he said.

A survey at Penstock Lagoon in the last week had detected good numbers of fish, finding average (legal) sizes of 1.3kg for rainbow trout and 1.7kg for brown trout. “So, if you’re into fly-fishing, that’s quite a good place to go and have a look at,” he said. He also recommended Arthurs Lake, which saw 13,500 fish go through the spawning traps this year. “Every indication is that there are still numbers of fish there.”

Mr Freeman’s colleague Jonah Yick spoke about angler logbooks and the iFish mobile phone app and how they were improving the information available to the IFS. “We have an ongoing study where we’ve translocated and released 400 brown trout from the highlands into the Derwent,” he said. “Basically we are trying to see what their movements are, how catchable they are, and whether or not they’re going to run straight upriver or if they’re going to disperse. The ratio of how many of those tagged fish are caught compared to wild fish gives us an indication of how well the River Derwent is fishing.”

“Last year we released 400 trout and we got 21 tagged fish back, but we also had lots of wild fish caught by all the anglers, so the Derwent is fishing really well. This season we released another 400 of these tagged trout in July and so far we’ve already got eight fish back.” Last year’s fish have green tags and this year’s have white tags. Anyone catching these fish is asked to send details to the IFS. A prize pack will be sent out and the angler will be entered into a draw to win a rod and reel at the end of the season. This is separate to the orange-tagged fish with their $2000 prize.